iPhone Frenzy, “All You Can Eat” Data, Mobile Internet Now At “Critical Mass”

We will probably look back on last year’s announcement of the iPhone (1.0) as the seminal or galvanizing event of the mobile internet. In fact, the events leading up to the iPhone were a decade or more in the making, but it’s the single moment when the mobile Internet came into focus. The world hasn’t […]

We will probably look back on last year’s announcement of the iPhone (1.0) as the seminal or galvanizing event of the mobile internet. In fact, the events leading up to the iPhone were a decade or more in the making, but it’s the single moment when the mobile Internet came into focus. The world hasn’t been the same since and everyone else has been forced to respond. (Apple reported sales of a million 3G iPhones in the first three days.)

In parallel, Nielsen Mobile proclaimed that the mobile internet had reached “critical mass,” with 15.6 percent penetration in the US (40 million regular users).

The term “regular users” is defined by Nielsen as those who access the mobile internet at least once a month. Here’s the country by country breakdown of mobile internet usage according to the firm: 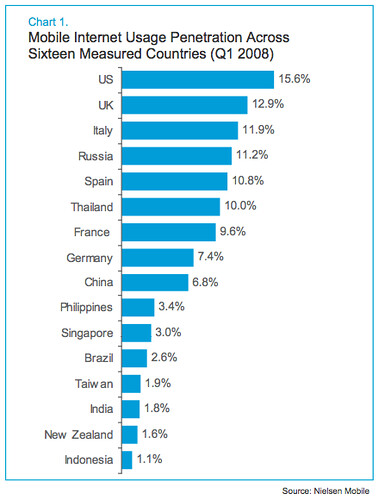 Here’s my rendering of a breakdown, issued earlier this year, of US mobile internet usage by device type according to M:Metrics, now part of comScore: 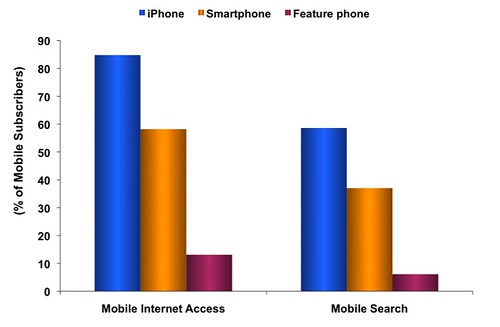 Here are some additional basic facts about mobile usage in the US:

Part of why the internet access rates are so high for the iPhone, beyond its interface and usability, is that the device is packaged with a data plan. Historically, data plans are add-ons and cost has consistently been the barrier in terms of data plan adoption and thus mobile internet access.

According to a report that comScore issued earlier this year, the following were most cited as the top reasons for not accessing the mobile internet:

But the advent of “all you can eat” (unlimited) data plans at all the major US carriers is helping to drive adoption and usage of mobile internet services and mobile search. My program, Local Mobile Search, previously forecast $5.08 billion in mobile ad revenues for North America and Europe by 2012. That may turn out to be aggressive, but no one should doubt the arrival and importance of mobile as an internet access tool and marketing platform.

In fact, we may see mobile search volumes (on a global basis) overtake the desktop within five to seven years.

All these issues, including the latest in mobile SEO best practices, will be explored in detail at SMX Local-Mobile next week. This will be the single biggest “brain dump” on mobile SEO available in one place at one time.

(In addition, if you’re interested you can download slides I’ve put together reflecting most of the LBS applications launched with the iTunes apps store last week.”)