Google has been planning its ThinkMobile event for three months. Google’s Jason Spero (former AdMob VP) is on stage first and says he’s been anticipating an “event like this” for “about four years.” He says it reflects the fact that mobile is ready. Google’s Dennis Woodside reports that Google has seen a “400 percent increase […]

Google has been planning its ThinkMobile event for three months. Google’s Jason Spero (former AdMob VP) is on stage first and says he’s been anticipating an “event like this” for “about four years.” He says it reflects the fact that mobile is ready. 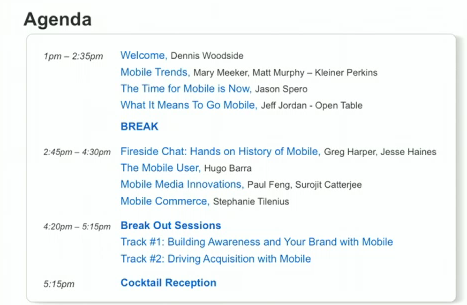 Google’s Dennis Woodside reports that Google has seen a “400 percent increase in the number of searches coming from mobile in the past year.” He adds, “20 percent of our search volume in some categories are coming through mobile devices.” (This is later refined by Spero below.)

The mobile industry “will dwarf the PC and what the PC industry has done.” The market (advertisers and publishers) will follow consumer adoption he says. Woodside points out three Ferraris are sold every month through eBay Motors mobile. He then ticks off a laundry list of industries that will be “transformed” by mobile. He counsels companies to take the mobile web seriously and invest in mobile accordingly. Woodside makes a big pitch for “being found” on mobile devices and search, using Chrysler and its Super Bowl ad and related (mobile) search campaign as an example. Now he makes a pitch for Android and its “open” platform. Next up . . .

Mary Meeker and Matt Murphy from Kleiner Perkins (and their data slides): Meeker throws a lot of data about mobile growth at the audience. Here are a few slides: He points out that people are doing new things on their mobile devices that they didn’t do just a couple of years ago: Murphy discusses eCPM trends in mobile (below): they’re uneven for 2010. There weren’t a lot of premium brand advertisers in the market, says Murphy. He makes a plea to agencies in the audience to spend more in mobile. Back to Meeker. She says mobile commerce will ramp more quickly than e-commerce has. She talks about ShopKick and how it drives foot traffic into local stores (Best Buy). She points out that EBay expects mobile gross revenues to rise to $4 billion this year, from $2 billion.

Murphy returns and talks about virtual goods and business models (paid vs. ad-supported). He cites portfolio company Pinger as an example that saw more success with ad-support and in-app purchases (upsell) than a paid strategy. Murphy goes on to point out that “not all platforms are created equal.” Murphy shows a chart that shows iPhone is monetizing apps and in-app commerce better than other platforms (including Android): We’re now into overkill with the data and “pace of change” discussion. Meeker: The wealth creation (and destruction) from the mobile internet will be bigger than previous business and computing cycles. “Every business is going to get disrupted,” she says.

She’s now rifling through a laundry list of other things to watch in mobile.

Jason Spero is back on stage summarizing the Meeker-Murphy presentation, hitting what he thinks was most significant. Spero is now relating an anecdote about his neighbor using his mobile device to get information about how to change his car’s tail light. He also plugs the Nexus S again. Spero talks at length about how handsets have improved dramatically and come down in price. He gives a “tip of the hat” to the iPhone and then shows a bunch of Android handsets. Search on mobile devices complements search on the PC: Spero is talking about cultural and behavioral trends and how mobile is changing them: Mobile users are out and about and have immediate needs and problems that mobile can solve. Mobile is local: Again Google presents the now-familiar stat: 1 in 3 mobile searches is local. (Microsoft has stats that show more than half of mobile queries have a local intent.) Spero says mobile users are engaging with smartphones at every part of the purchase funnel: Now Google is showing a video with consumer testimonials saying, in effect, “I use my smartphone all the time and in stores.”

Spero now tries to dispel the idea that mobile is small and in the realm of “early adopters.” He shows that huge amounts of queries are happening on mobile phones: “1 in 7” is the average across various categories (15 percent average).

He tells anecdote about a friend trying to buy baseball tickets on a mobile phone. It reflects how most websites are not ready for mobile, let alone mobile commerce. Spero says that among the “top 800 Google customers, 79 percent are not ready to engage your mobile customers.”

He ends by offering five things “you can do now” to be mobile ready:

Spero recommends doing all this in 90 days and be willing to live with imperfection (and iterate). Live blogging is certainly imperfect . . . And with that the livestream is done.
Top Mobile Internet Trends Meeker