The Things That Facebook Causes, According To Google, Yahoo & Bing

I had a good chuckle over the news yesterday that Facebook apparently has caused an increase in syphilis (or not). So reported the Daily Telegraph, which turns around today to add that to a list of other things Facebook supposedly causes, such as cancer or a surge in rickets. Anything missing? How about asking Google, […]

I had a good chuckle over the news yesterday that Facebook apparently has caused an increase in syphilis (or not). So reported the Daily Telegraph, which turns around today to add that to a list of other things Facebook supposedly causes, such as cancer or a surge in rickets. Anything missing? How about asking Google, Yahoo and Bing.

NOTE: A special welcome to our visitors from Facebook! For more stories from us on search, delivered via Facebook, become a fan of our Search Engine Land page!

All those search engines automatically suggest things to search for, as you begin typing. The suggestions come from looking at their records of popular searches that are being done by millions of people. So wondering what many people think that Facebook causes? Just type that in and see what suggestions come up! 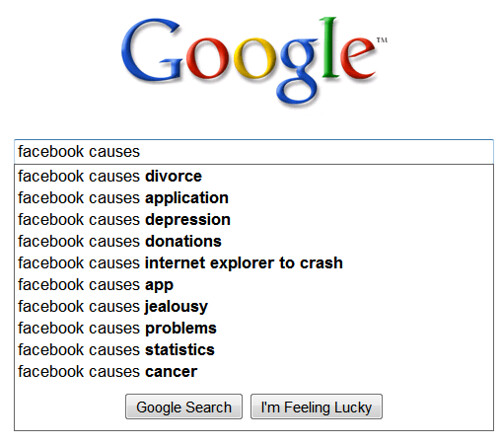 Over at Yahoo, we get many of the same things:

Facebook again causes issues such as problems, divorce, cancer and depression. But we also get new things that Facebook causes:

I’m not sure what reentry might mean. Perhaps a reentry into a new relationship after all those breakups? “Facebook causes non profits” is fascinating? Causes them to succeed? To suffer? To emerge out of nowhere? Or as Angie Pascale suggests, maybe its people looking for a list of non-profits that use the Facebook Causes application.

By the way, people searching for the things that Facebook causes has reached a new high, at least according to Google Trends, which shows the volume of searches over time that have happened containing those two words: 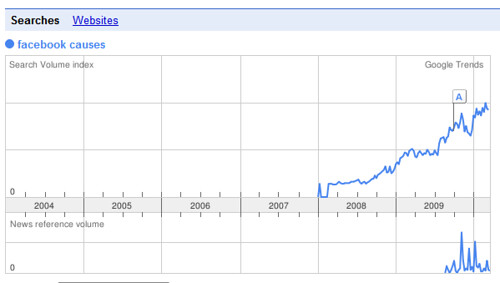 Part of that increase may be people who are simply looking for “Facebook Causes,” as in the application. But that chart includes any search with the words “facebook causes,” so other things are mixed in.

Keep in mind that what people search for isn’t an indicator that something is actually true. People searching for something like “Facebook causes cancer” may have heard a rumor and are trying to find out more.

Enjoyed this story? To keep up with more like this on Facebook, become a fan of our Search Engine Land page!