An internal Truveo study conducted during the past month found that Truveo has a more comprehensive video search coverage than its top competitors. According to Truveo it undertook the study itself because “there is no major testing organization, publication or consulting firm publicly conducting ongoing quality studies of video search engines.”

Included in the study were Blinkx, Google Video, Microsoft Live Video Search and Yahoo Video search, in addition to Truveo. YouTube was not included because it’s not considered by Truveo to be a “video search engine.” Truveo indexes YouTube results.

The survey involved 5,000 individual queries across the top 100 Alexa rated news, sports, TV, music and movie sites that have video content. In terms of those top 100 sites here’s how the various competitors fared in terms of coverage: 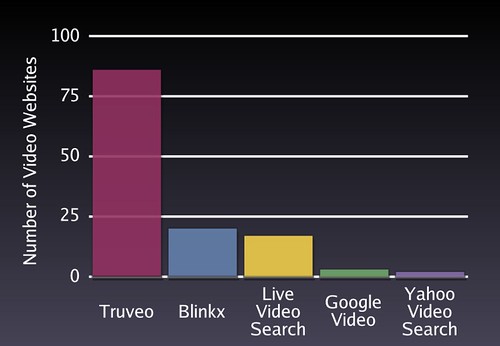 Truveo went to great lengths with me to show that the survey was unbiased. Clearly any company that conducts a survey in which the outcome declares that company itself to be the winner needs to be extremely transparent, which Truveo is trying to be. Here’s what it said regarding the methodology of the study:

To develop the list of 100 websites Truveo selected the top 100 Alexa-ranked video content websites with the highest traffic rank (as recorded on August 6, 2008) for each of the following categories: news, sports, TV, music and movies. These five lists were combined and sorted by traffic rank. Sites were then checked to ensure they had a reasonable number of videos and were appropriate for the study. The top 100 sites on this list were then selected for testing.

The full methodology is available upon request from Truveo or AOL.