Why Google Should Retire The Global Market Finder

Does Google really “get” international? There are clearly some very clever people within Google who do — but the corporation’s behavior bizarrely still tends to suggest a silicon valley tech company that’s a little insulated from the non-English speaking world. Take, for example, the “Global Market Finder” tool which you can find here. This tool […]

Does Google really “get” international? There are clearly some very clever people within Google who do — but the corporation’s behavior bizarrely still tends to suggest a silicon valley tech company that’s a little insulated from the non-English speaking world.

Take, for example, the “Global Market Finder” tool which you can find here. This tool was originally conceived in the UK and then made its way into the Google mothership.

The idea behind the tool is that you can enter a keyword or several keywords — and it will then automatically in a matter of seconds rank the markets where there are opportunities for you and your business. The trouble is, the tool doesn’t actually work — and worse, it’s positively dangerous. Let me take you through an example so you can understand what I mean. I’ve been using this particular keyword example for several years — so I know my way around pretty well.

The image above represents what folks in the US might call “Soccer Cleats” and what I’d call “Football Boots”. Let’s imagine you’re a US manufacturer of these products and are looking for markets to export to. 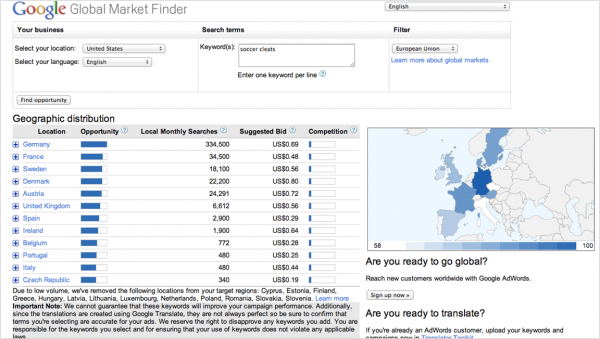 As you can see from the above, we’ve checked “soccer cleats” in the US to target Europe and concluded that Germany is the top market, France second and Sweden third. The UK is not in the top 3 despite the UK having a very large soccer / football industry. Soccer Cleats In The UK

When you reveal the keywords which the tool has chosen to use for the UK, you discover it’s defaulting to “soccer cleats”.

Now, I know that I’m not the world’s greatest fan on soccer or football as its known in the UK, but I know what kit the footballers wear and until I presented a case study on the promotion of “football boots” at a US conference, I had never heard of “soccer cleats.”

The correct term for the UK is “football boots” and when I check that out on the tool, the markets I get ranked in order of attractiveness are the UK first, Spain second and Germany third.

The only common market is Germany which has dropped 2 places in rankings as a result of me using the correct UK term. The above French check of the keyword “crampons foot” which was given to us in the UK check of “soccer cleats” gives France the winning position, followed by the UK in second and Spain third. The total number of monthly searches is just 12,016 in the UK.

Just to recap on what that means for our research, and to keep this article to a reasonable length, let me summarise the quality of the results on a sample of countries as follows:-

Need I go on? Sadly, I have to. There are two other aspects of the functioning of the tool which lead to signficant errors.

One is that when keywords have multiple potential spellings — as the German case does in my “soccer cleats” test, the tool adds up the results giving a disproportionately high result compared with other markets.

For Germany, for instance, the tool totals the results of “Fußballschuh”, “Fußballschuhe” and “Fußball Stollen” — and comes up with a very large number. It doesn’t do this in all of the markets, so the comparison and ranking of markets is completely false.

The Italian example above is the most amazing of them all. “soccer cleats” gave us a search term for Italy of “scarpe da calcio”. I happen to know that the singular version of this word “scarpa da calcio” also gives a reasonable search volume in Italy.

When you compare the two search terms where the only difference is one letter — and the fact that one is the plural and one the singular, the resulting markets which are recommended are the same in the top three positions — but none of the country positions shown below that actually match. How can this be for such a small and subtle difference?

I’ve also checked around half of the European equivalents of “soccer cleats” in each individual country to see which markets are recommended and the variance between the recommendations, bearing in mind that aside from the words, the product and size of market must be constant.

The result is amazingly constant, in that I didn’t see the same result presented twice and the results are constantly inaccurate. The tool also doesn’t compare market sizes to give any kind of level of interest measure per market.

Well, bear in mind that Google is keen to take your advertising money. On the side of the Global Market Finder screen is a button to go global with Google AdWords. This is no toy and newcomers to the international sphere may think it has a value, which it absolutely does not. Proceed with caution.