Yahoo Image Search now contains photos from Yahoo’s Flickr photo sharing service, ironically catching Yahoo up to Google, Microsoft and Ask.com — all of which already included Flickr photos in their respective image search engines. Yahoo blogged about the change: Now when you use Yahoo! Image Search, in addition to the billions of images we […]

Yahoo blogged
about the change:

Now when you use Yahoo! Image Search, in addition to the billions of images
we crawl from the Web, you’ve got access to over 300 million images from the
amazing community of photographers on Flickr.

story on the integration, Flickr photos shown in Yahoo Image Search have
hyperlinks back to the Flickr member that shared the photo.

For example, a Yahoo Image search for
danny
sullivan returns many images. But in this one from Flickr, you’ll see the
name "Tamar Weinberg" is a blue hyperlink: 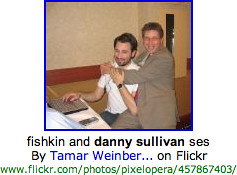 Yahoo Images also supports the site command to restrict photos to certain
sites. Just put the domain you want to focus on after the site: operator, like
this:

That does a search for photos matching the words [barry schwartz] that are on
Flickr.com.

Thomas listed several examples, which I went through myself: