A Local Look At Microsoft’s Bid For Yahoo

Last Friday, shortly after the Microsoft bid for Yahoo was made public, Danny and I had an opportunity to discuss the proposed acquisition with Yusuf Mehdi, senior vice president of strategic partnerships for Microsoft. Our questions to Mehdi often returned to post-acquisition “integration” issues. I brought up local, maps, and mobile as areas where both […]

Last Friday, shortly after the Microsoft bid for Yahoo was made public, Danny and I had an opportunity to discuss the proposed acquisition with Yusuf Mehdi, senior vice president of strategic partnerships for Microsoft. Our questions to Mehdi often returned to post-acquisition “integration” issues. I brought up local, maps, and mobile as areas where both companies had made significant investments but also had significant duplication and redundancy. Mehdi responded, “We have not made decisions at that level, such as what to do with maps or mobile products. Every alternative is on the table. We will evaluate all those options and decide. We’ll pick whatever we think is the best options.”

Yet in many ways, local is a perfect microcosm of the entire issue of product integration and the challenges surrounding determination of what brands or properties to retain and which to fold. Assuming Microsoft is successful with its bid, it won’t have to act quickly to promote or shutter any of the combined company’s local properties. But executives will be making choices during the transition about where to deploy resources and thus will be picking “winners” and “losers.” Here’s a tour of the local properties and the choices that may need to be made.

At one time Yahoo Local was the undisputed leader in local search and dynamic maps; it was the most innovative product in the market. It still has a great deal of community content that is not equaled by Microsoft’s newer Live Local property. It also has been creative and more expansive with what I like to call the “product definition,” including a range of additional content types, including events. 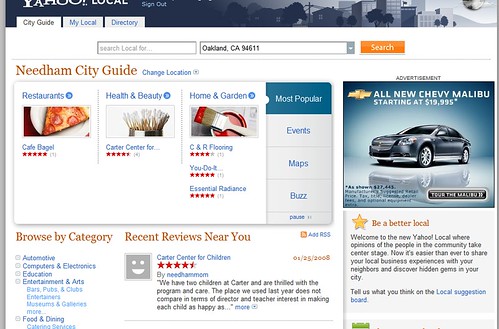 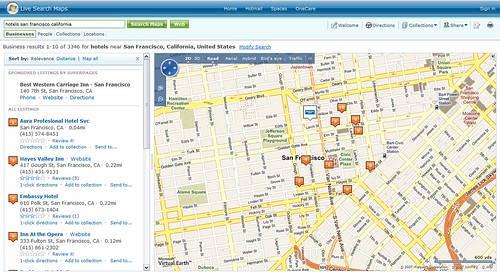 While Yahoo Local is a more “differentiated” product – Live Local is similar to Google Maps – Microsoft’s mapping platform, Virtual Earth, is much deeper and more powerful at this point. In addition, Yahoo Local has more “brand recognition,” consumer awareness, and engagement than Live Local. Thus, I would expect some sort of combination of the two products, replacing Yahoo Maps with Virtual Earth and seeking to integrate Yahoo community content and features into a redesigned offering.

The “yellow pages” sites of Yahoo and Microsoft continue to exist because they still serve a segment of the population that is looking for “name and number” information. Yahoo Yellow Pages was one of the earliest and most successful online yellow pages, but now looks very tired, in contrast to the other local resources in the market. By comparison, Microsoft yellow pages is a slightly modified version of Live Local and runs on that same platform. 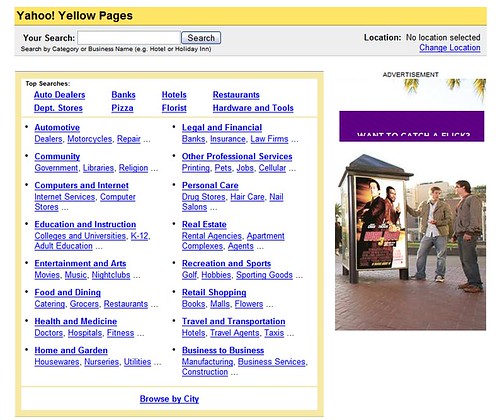 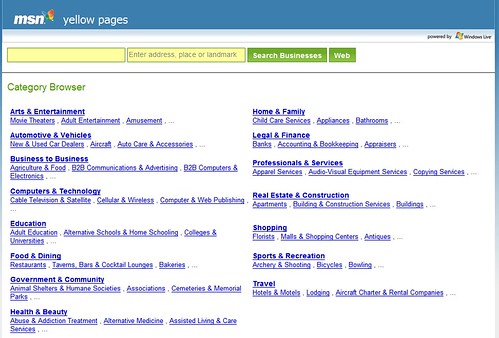 I would expect both of these sites to disappear over time, especially Yahoo Yellow Pages. The combined local search product would probably support a perfunctory “yellow pages” offering, in the way that MSN handles it today. But Microsoft would likely direct traffic to a hybrid Yahoo Local-Live Maps site as discussed.

(There is a kind of parallel “shelf space” strategy that might apply to this entire discussion, where multiple properties are maintained and run off unified platforms and databases, which decreases costs and preserves consumer traffic volumes across the “network.” However, traffic trends will likely indicate and help determine whether a particular destination is preserved or folded.)

Though many people don’t include these verticals in the discussion of “local,” they are explicitly about local markets; it’s the internet driving leads and sales offline. (For that matter, one could equally include travel in this discussion, and travel as a category will present similar challenges because both companies have strong travel assets.)

Unlike the maps category, where Microsoft clearly has the stronger product, in jobs, cars, and real estate there is a kind of rough equivalence between the competing sets of properties. If I had to choose one as a cluster, I’d probably say that the Yahoo properties are stronger and somewhat more fully developed. 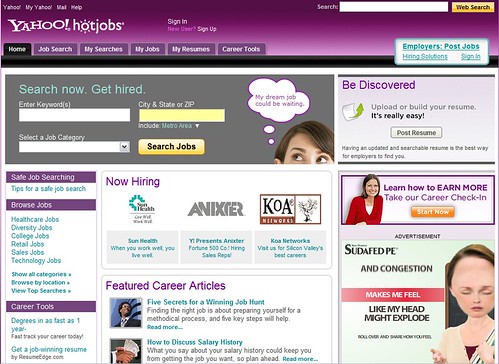 MSN Careers (in partnership with CareerBuilder): 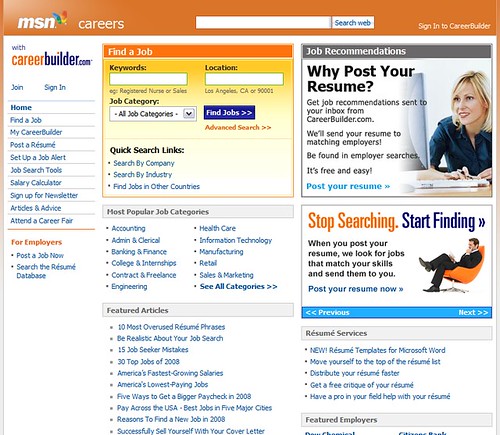 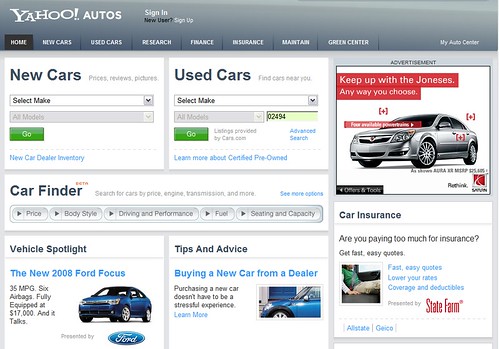 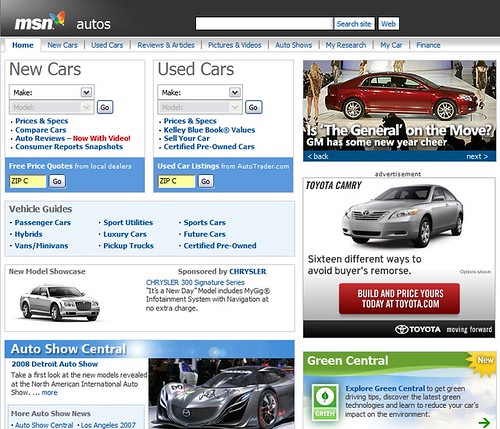 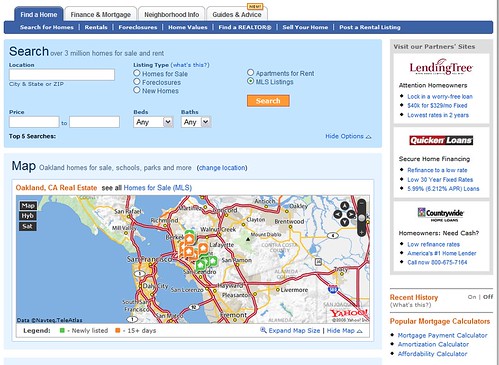 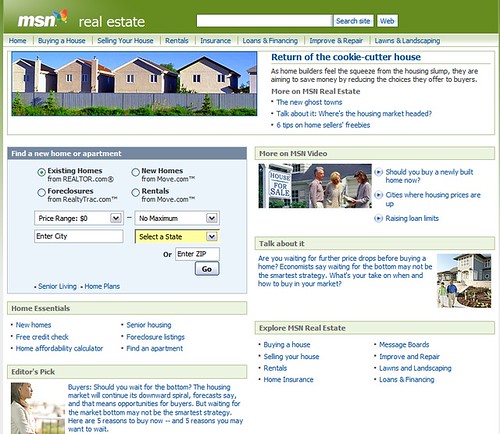 As you look at and use these three sets of properties, you’ll see that it’s difficult to differentiate them visually and in terms of functionality. As suggested, you would want to maintain both sets of destinations at least for a time, but doing so over the long term might not make sense if you’re trying to build strong, unified consumer brands.

One of the questions near to the hearts of readers of this site is the question of “core search” and how a combined company would handle it. Microsoft has invested very heavily in search but remains the number three player. Yahoo is number two. I’m not an engineer, but let’s assume that Microsoft’s technology and relevance are on course to surpass Yahoo at this point. Yahoo remains the stronger brand and has more market share. You thus wouldn’t want to shut down Yahoo in favor of Live (or some successor search brand). As with Maps, you might substitute Microsoft’s platform behind Yahoo’s brand. That probably would be a common scenario if the deal goes forward. 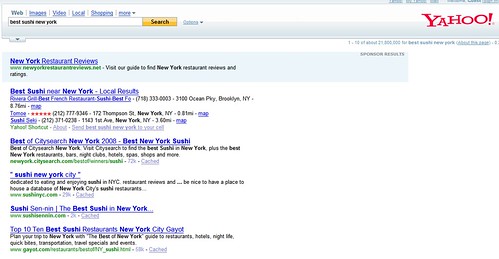 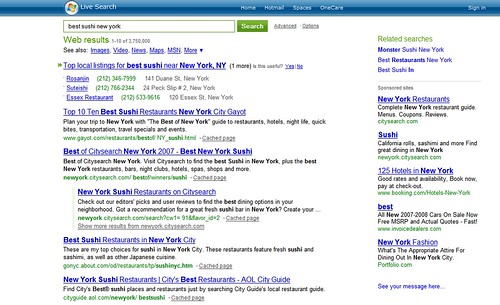 Finally, Microsoft would presumably inherit the newspaper consortium deal, which is a local ad network and ad serving deal with most of the major US newspaper groups except Gannett, New York Times, Washington Post, and Tribune Company. It’s a huge local asset and set of relationships, although unwieldy.

Mobile includes a heavy dose of local, of course. And here the assets are arguably more complementary than duplicative. For example, Yahoo has no voice search or free directory assistance product. Microsoft’s 1-800-Call- 411 (built on the Tellme back end) is a best-of-class offering that fills a hole for Yahoo. By the same token, Yahoo’s new mobile development platform “Go 3.0” goes head-to-head with Google’s Android, and to a lesser degree, Windows Mobile.

Yahoo has broader and deeper mobile carrier relationships around the globe than Microsoft, and its consumer brand strength is greater even in the nascent mobile market. Furthermore, beyond adopting the “open” Go platform initiative, Microsoft could also favor Yahoo mobile content on Windows Mobile devices.

Overall, you can see how the question of which products to support and which ones to fold reproduces itself again and again in virtually every area of local. There promises to be considerable drama before Microsoft can close a deal with Yahoo. But assuming it does, as these examples show, that may turn out to be the easy part.

Greg Sterling is the founding principal of Sterling Market Intelligence and a senior analyst at Opus Research’s Local Mobile Search program. He publishes Screenwerk, a blog focusing on the relationship between the Internet and traditional media, with an emphasis on the local search marketplace. The Locals Only column appears on Mondays at Search Engine Land.