Apple Maps adds indoor mapping for malls and airports, Do Not Disturb mode Apple has been developing indoor location and mapping for several years. Now the company is finally sharing the fruits of that effort in Maps for iOS 11.

Among the dizzying array of announcements Monday at Apple’s developer conference, the company showed off an updated Apple Maps that includes indoor location for shopping malls and airports. For shopping malls, Apple Maps will now show:

Indoor location for shopping malls will initially launch in Boston, Chicago, Hong Kong, San Francisco, Tokyo, San Jose, Philadelphia, New York, Washington DC, London and Los Angeles. Apple said that there would be “hundreds more per month thereafter.” It does not appear to include indoor navigation, however. 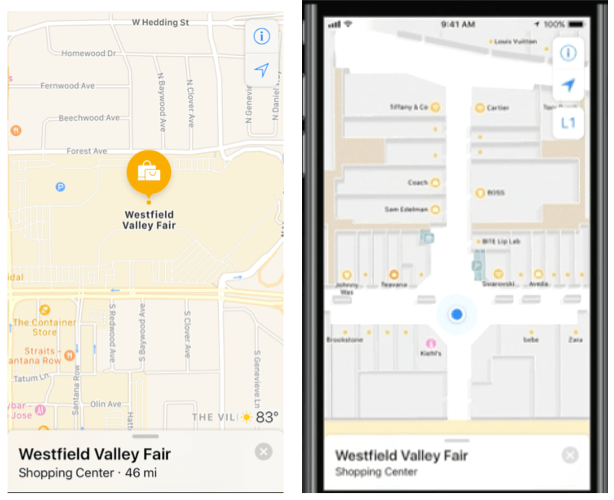 Above is a before and after set of screens. Unfortunately, the screen shot of the new indoor maps (right) is not great, but it provides an illustration of the level of detail in the iOS 11 version of Apple Maps. Google has offered a version of this information for a few years; Bing Maps also has selected indoor locations. Below are screens from the current version of Google Maps for the same mall location (Valley Fair, San Jose, Calif.). The following graphic shows the airports where Apple will launch indoor maps when iOS 11 becomes available later this fall. (Anyone can download the beta version now.) More significantly, Apple has created a Do Not Disturb While Driving function, which blocks all notifications while users are driving and actually blacks out the phone screen. There’s an auto-response that tells others the user is driving. But there are also overrides for passengers or urgent messages.