Bloglines Beta has launched the Bloglines Top 1000 list. Didn’t Bloglines have a top blog list already? Yes, they had a top 200 list, but users wanted to see a larger picture of what feeds people subscribe to, so Bloglines has released an expanded top 1000 list. A formal announcement is planned to go live […]

Bloglines Beta has launched the
Bloglines Top 1000 list.
Didn’t Bloglines have a top blog list already? Yes, they had a
top 200 list, but users wanted
to see a larger picture of what feeds people subscribe to, so Bloglines has
released an expanded top 1000 list. A formal announcement is planned to go live
on the Bloglines News page
later today, but here’s a closer look at what you can see now and some
explanation.

Bloglines compiles the top 1000 list by looking at the number of "active"
subscribers for a particular feed. Bloglines told us that they know people may
try to game the system, so they have decided not to detail exactly how the list
is computed and ranked. You can also see that Bloglines has added a graph
showing subscriber trends, a top movers chart and "New to Bloglines Top 1000."

Here is a screen capture showing the trends for specific blogs:

The number seems to indicate the position a particular blog or feed
previously held in the Bloglines 1000, which appears to be updated on a weekly
basis. We say this because when talking about the Top Movers (below), Bloglines
said that Sew, Mama, Sew came
into the Bloglines 1000 this week for the first time, moving up 790 rank spaces.
Here’s the chart, and you can see the 790 figure indicating the rank rise: 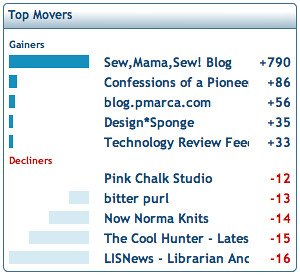 We assume the chart shows rank changes over time, but how long it’s plotted isn’t clear. We’re checking on that. 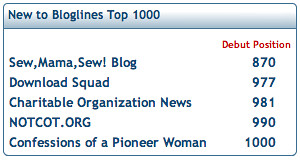 Bloglines rival Google Reader recently
added subscriber counts for feeds handled by its service, but Google Reader
said they have no
plans to do an official top list of their own (several
unofficial lists have been compiled). For more about the Google Reader
stats, see this past coverage from us:

Don’t forget, aside from the new Top 1000 list, Bloglines is also still
running a new Bloglines Beta, which is
covered more in our
Bloglines Beta To Challenge Google Reader post.

Finally, we’re thrilled to make the top 1,000 list. We’re currently ranked
310 — want to help us move higher? Then subscribe to our feed in Bloglines
using this button:

And/or, subscribe to our feed using any of the services listed below this
post or on our search news feeds
page.

Postscript: News from Bloglines now up here. Bloglines also tells us in response to questions: