comScore: US Has Most Searches; China Slowest Growth; Google Tops Worldwide In 2009

Which countries generate the most searches? comScore has just published a look at this, and the US once again is ranked tops. China maintained its second place position but showed the lowest growth of any country in the top ten. Google remained the top search provider worldwide. And globally, searches grew overall by 46 percent. […]

Which countries generate the most searches? comScore has just published a look at this, and the US once again is ranked tops. China maintained its second place position but showed the lowest growth of any country in the top ten. Google remained the top search provider worldwide. And globally, searches grew overall by 46 percent.

Here’s the top ten countries chart, which shows the number of searches measured in each country in December 2008 versus December 2009, conducted by those 15 years and older: 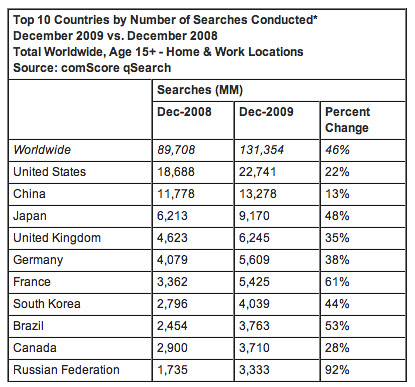 The US was ranked tops in both years and grew to 22.7 billion searches in December 2009, a 22% growth rate. China maintained its number two spot with 13.3 billion searches — but it posted the lowest growth of any country in the top 10, only 13%.

Russia had the largest growth, a 92% rise. But with only 3.3 billion searches, it’s also last on the top ten list. Japan is one of the most interesting counties on the list, because it has both a large number of searches — 9.2 billion — and one of the highest growth rates, 48%.

Also notable is Brazil, which is the only country to rise in the overall rankings, from ninth place in 2008 to eighth place in 2009. That nudged Canada into the number nine spot. Both countries had about 3.7 billion searches conducted in December 2009.

Worldwide, there were 131 billion searches conducted globally in December 2009, a 46% growth over the same time last year. On a yearly basis, that’s about 1.5 trillion searches per year. However, that number isn’t precise, because any particular month might have had fewer or greater searches than in December. The 1.5 trillion figure is generated by simply multiplying the December 2009 figure by 12.

What companies are serving all these searches? There’s a top 10 chart for that, too! 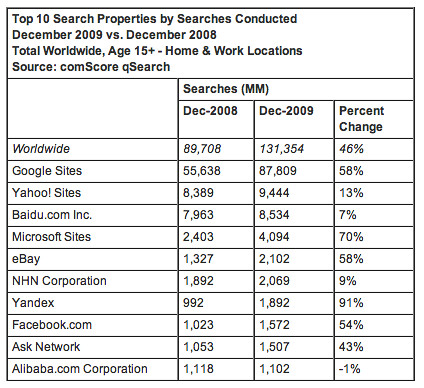 Google handled the most searches, 87.8 billion of them.– and also had the largest growth, 58%.

To really understand how huge Google is compared to competitors, of the 131 billion searches that happened overall, Google handled 67% of them. Its closest competitor, Yahoo, handled only 7% of the world’s searches. In addition, Google’s 67% worldwide share is up from 63% of all searches in the world in December 2008.

While Google was serving billions of queries nearly in the triple digits, everyone else was far behind in the single digit range.

Number two Yahoo handled 9.4 billion searches, well back from Google and well back in terms of growth, too — only 13%. That was one of the lowest growth rates for anyone in the top ten list. China-based Baidu also had an extremely small growth rate. While it’s the number four search engine overall, at 8.5 billion searches, it grew only 7%.

Also notable are Facebook and eBay. comScore includes any site with significant search activity on these charts, not just sites that are explicitly designed to be search engines. Doing this reflects just how many people conduct searches in beyond the “core” search engines. eBay ranks fifth at 2.1 billion with a 58% growth rate; Facebook handled 1.6 billion searches with a 43% growth rate.