More doom and gloom on the paid search side for Google. comScore is once again reporting a drop in sponsored clicks, something that also happened last month. After last month’s fallout, comScore did a lot of further analysis shared at the Searchscape panel at our SMX West conference and online to ease concerns that it […]

More doom and gloom on the paid search side for Google. comScore is once
again reporting a drop in sponsored clicks, something that also happened last
month. After last month’s fallout, comScore did a lot of further analysis shared at the
Searchscape panel
at our SMX West conference and

online to ease concerns that it meant the sky was falling for Google and the
US economy in general.
comScore Paid Search Data & How The Sky Might Not Be Falling from us has
more background on this. But how do things look for the second month running?
I’ve done some drilling into the numbers, with lots of pretty charts. But
frankly, it’s anyone’s guess. We just don’t have all the information needed.

Let’s first go back to main explanations I saw trotted out for last month’s
decline:

OK, now we’ve got another month of decline. I think we can discount the
clickable area theory. That made sense for the drop between November and
December. But last month’s news was about a December to January drop — and now
we’ve got a January to February drop. That’s well beyond when you’d expect the
clickable area change to have an impact.

Let’s do some numbers and charts, and see what we can find. I don’t have a
full year’s worth of data. I’ll see if I can get that from comScore. But I
generally don’t like comparing a particular month to a prior month, anyway. I
want to see a trend over time. Not having a full year means I can’t tell if
there’s been a general post-holiday decline in paid clicks. But I don’t think
this is the case, since we haven’t seen this attention and panic over the
numbers before. They haven’t seemed to have been in decline before.

The first chart below looks at the change in sponsored clicks for the five
major search engines over the past three months, from comScore data: 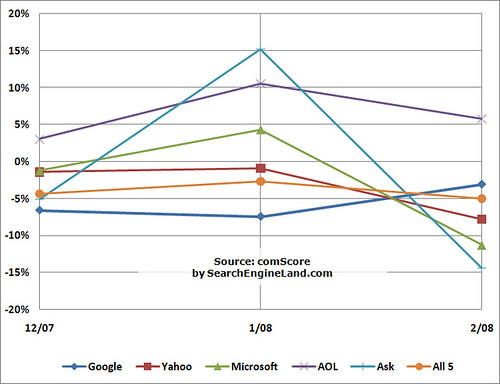 You can see that Google is in negative growth territory, but at least the decline is
reversing. It went from a 6.6% decline in sponsored clicks between November and
December 2007 to a 7.5% drop between December 2007 and January 2008 to a
reversal in fortunes, a decline of 3.1 percent between January and February
2008.

Notice also that Google is the only major search engine to see an actual
rise. All the others saw a drop from January to February. I have no idea what
this means or why it might be happening. Speculate at will.

Let’s look at the same figures differently. The chart above is the percentage
change from one month to another. How about the raw numbers? 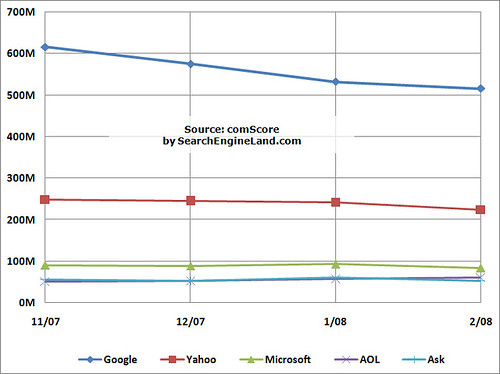 Figures above are in millions of clicks. You can see the Google drop, leveling off in the last month a bit. But it
also gives you perspective on the other major search engines. On a percentage
basis, they’ve had big spikes, sometimes upward. But looking at raw numbers, nothing is so
dramatic.

What about the fact that in February, you had only 29 days compared to 31
days in January. Could two days really make that much of a different to Google’s
growth or decline? Actually, yes: 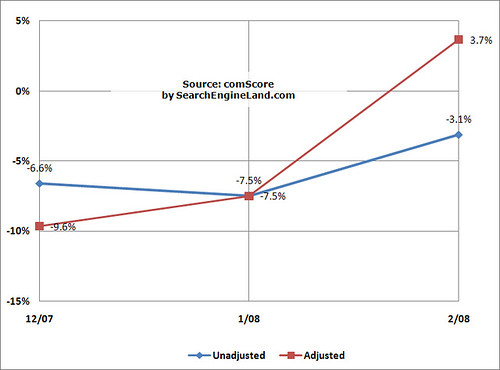 OK, here’s what’s going on. The blue line shows the figures most people are
talking about, the month-to-month percentage change in sponsored clicks. The red
line adjusts for the days of the month. I took data from November & December
2007, and January and February 2008, and divided the monthly figure by number of
days to get an average daily figure. Then I compared the average daily figure
between each month.

Result? You can see that the December drop initially reported would have been
more dramatic if a day had been removed, to properly compare it to November’s 30
days. The January figures are exactly the same, because December and January
have exactly the same number days. And adjusting for February’s missing two
days? That puts Google into positive territory.

Let’s go for one more chart: 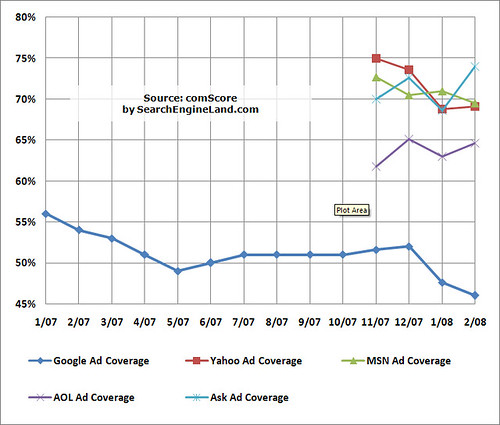 That’s the percentage of search pages estimated to have ads on them. I have
more data for Google because comScore

published those figures back farther. Google has far less coverage than any
of its competitors, and that coverage has been dropping.

Aha! Well there’s the answer! Fewer ads, therefore less paid clicks, therefore
Google’s in trouble. Actually, we don’t know. I’m not going to get into the
clickrate on ads this time. I’m kind of tuckered out. But if fewer people are
clicking on ads, then coverage isn’t everything (for the record, Google was at
12.7% clicks on sponsored searches in relation to overall searches in November
2007 and was at 10.6% for February 2008).

But it’s not as easy as that. Perhaps advertisers are paying more per click?
If so, then all this speculation on what the paid click rates mean to Google’s
bottom line remain that, speculation. To quote UBS
analyst Benjamin Schachter in a recent research report:

The bull case here is that even though Google may be showing fewer ads, the
ads are of higher quality and therefore, they are able to charge higher
prices. This is true in theory, but the increasing price is not likely
immediately manifested in the auction or through minimum pricing. Overall,
improving quality and showing fewer ads is the right thing to do for the
long-term health of the Google ecosystem, but may come at the expense of
near-term revenue.

We won’t know until Google actually posts figures. And when it does, remember
there’s the complication that those figures contain clicks from contextual
advertising, as well as paid advertising.

For more discussion, see
here and
here on Techmeme.