Everything You Need To Know About Google’s Local Algorithm, Pigeon

Columnist Neil Patel provides a summary of what we know about Pigeon, Google's new local search ranking algorithm that was rolled out in July 2014. Local search is important. Always has been, always will be. Even for the mavens of the mobile workforce, local results matter.

Google’s new local algorithm has taken local search to a whole new level of specificity and accuracy. Here’s everything you need to know about the algorithm update.

On July 24, Google pushed out a new local search algorithm. Barry Schwartz broke the story on Search Engine Land that evening, and the site later dubbed this algorithm update “Pigeon.”

[blockquote]Google shook the local SEO world with an update that dramatically altered some local results and modified how they handle and interpret location cues. Google claimed that Pigeon created closer ties between the local algorithm and core algorithm(s).[/blockquote]

Later, on August 1, it appeared as though Pigeon had been updated, though this was not officially confirmed by Google.

Searching Google and searching Google Maps has often provided a very different set of results. This changed after the rollout of Pigeon. The algorithm connects web search and map search in a more cohesive way.

Revised local results resulting from the new Pigeon algorithm are “similar to the page rankings of the Google web search,” as a report from Volume Nine explained.

Yelp took issue with Google in mid-2014 for apparently disregarding the major local review site in its search results. The compay accused Google of pushing its own reviews ahead of Yelp’s, even when the searcher asked specifically for “yelp” in their query.

Pigeon has corrected this problem, and now puts Yelp-specific queries ahead of its own.

Yelp isn’t the only local review site that got a boost. Sites like Urbanspoon, OpenTable, TripAdvisor, Zagat, Kayak, etc. received higher visibility within the search results following the release of Pigeon.

The queries that return these results may be as generic as [san francisco restaurant] — in other words, the user may not even be searching specifically for reviews or review sites. Essentially, this means that the algorithm places greater weight on directories and the directory listings.

The data from Mozcast registered a major fluctuation following the update. These graphs indicate the changes in the Local Pack, Carousel, and One-box: 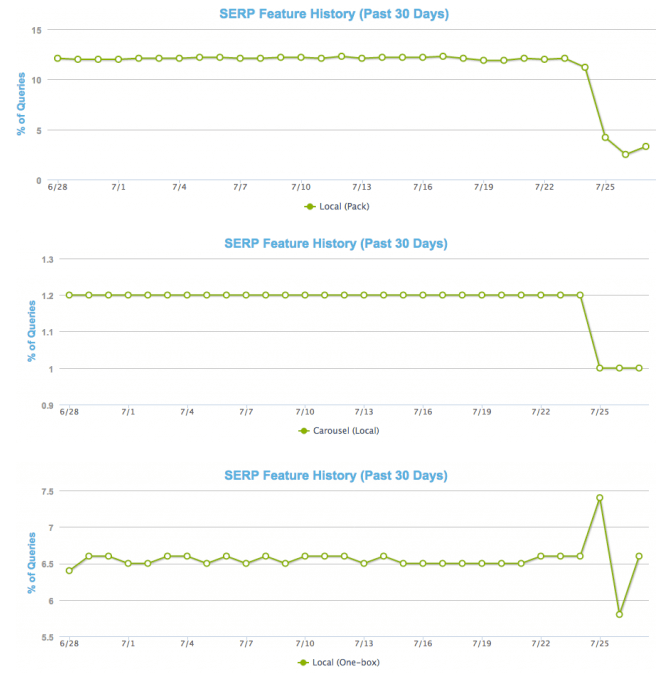 [blockquote]In the local search-data world, neighborhoods are known as “informal space,” meaning there are no standard boundaries. So the definition of where a neighborhood starts and stops can be different for everyone. This makes it hard for services like Google to get the neighborhood thing right.[/blockquote]

Prior to Pigeon, local results from these dense spaces were hard to parse. Now, with Pigeon’s increased specificity, the algorithm is more accurate. But what does this accuracy entail? I offer the following conjectures:

The algorithm will return better results for queries that use both the conventional term for a local neighborhood and the colloquial term for the same neighborhood.

A neighborhood can be known by several different names, depending on who you’re talking to. A map-reading stranger may visit a new area and call it “Uptown,” just like his map tells him. But a local may think, “‘Uptown’? Never heard of it. We call this area ‘Trackville.'” Two names. One place. Which one is right? With the algorithm update, both are right.

The algorithm will provide local results for areas that are slightly outside of a searched-for local neighborhood.

Let’s say you’re in a city neighborhood looking for a coffee shop. You happen to be right near the “border” of another local neighborhood as defined by the maps.

You don’t care what the map’s neighborhood demarcation says; you just want a latte. So, even if you Google “Soho coffee,” Google might provide a search result that is a short distance away in Little Italy, outside of the official realm of Soho. Depending on where you are in Soho, Little Italy might actually be closer anyway.

This is the kind of non-specific specificity and location-based intuitiveness that Pigeon seems to be focused on. Shotland put it like this: “Google, in its infinite algorithmic wisdom, sees a small search area, like a neighborhood, and wants to give the searcher results from outside the hood in order to give a more robust set.”

The algorithm will give greater weight to local businesses that have neighborhood-focused keywords and citations.

Due to the hyperlocal tightening of the algorithm, I think that local businesses will begin to rank better if they have optimized their social profiles, citations, and Google+ profiles in such a way to reflect their specific location in a neighborhood of a city or region, not just the name of that city or region. Hyperlocal search is more important now.

Some businesses saw their rankings increase after Pigeon rolled out. Some, by contrast, watched their listing disappear. Here are some of the comments from Search Engine Land readers:

You win some; you lose some. Algorithm changes do that.

Based on the flood of comments in Search Engine Land, and some spadework by Darren Shaw, several business types seem to have experienced a hit from Pigeon. Here are the niches/themes that Shaw determined as losing local rank:

One of the most notable results from Pigeon was the decline in local packs. Darren Shaw of Whitespark reported a 23% drop. Mozcast registered a 60% drop! Mike Blumenthal brought some helpful perspective to this jaw-dropping number, but also noticed the reduction in 7 packs.

Early after the algo change, complaints surfaced of spammy results taking top positions in the search results. Even Expedia’s headquarters turned into a hotel after Pigeon was released.

Obviously, the algorithm update was not designed to target spam; thus, it’s possible that some spam creeped in. Barry Schwartz, who maintained a prolific output of commentary on Pigeon, wrote, “Like with any new algorithm launch, there are always bugs, unexpected outcomes and less relevant results.”

And, like with any new algorithm update, it is continually refined post launch. Since Pigeon was initially rolled out, many of the reports of spam results have faded (and the Expedia issue has been corrected as well). The algorithm seems to have stabilized by featuring of high-quality results only.

12. The Update Has Not Been Released Worldwide

The launch of Pigeon on July 4, 2014, was a U.S.-only release. In late December, it was rolled out to United Kingdom, Canada and Australia. It has not been released elsewhere as of the time of this writing.

I agree with the overall position of John A. Quelch and Katherine E. Jocz, who assert in their book title that “place matters more than ever in a global, virtual world.”

Those of us who travel to San Francisco, talk to colleagues in Tel Aviv, tweak a client’s website in London, and teleconference with service providers in Perth and New York still need to grasp the importance of local search.

Pigeon, or whatever you choose to call it, is pushing local search forward. And that’s a good thing. How has your business been impacted by the refinements in local search?