Google Drops The Pirate Bay’s Home Page: Was It A Fake DMCA Request?

If you search for thepiratebay in Google and scroll to the bottom of the search results, you may notice that Google has said they removed search results from the page due to a complaint they received “under the US Digital Millennium Copyright Act.” The result they removed included the Pirate Bay’s home page. Here is […]

If you search for thepiratebay in Google and scroll to the bottom of the search results, you may notice that Google has said they removed search results from the page due to a complaint they received “under the US Digital Millennium Copyright Act.” The result they removed included the Pirate Bay’s home page.

Here is a screen shot that shows Wikipedia coming up as the number one result for a search on the name of the web site. The second result is the main site, which I assume was not under a DMCA complaint? 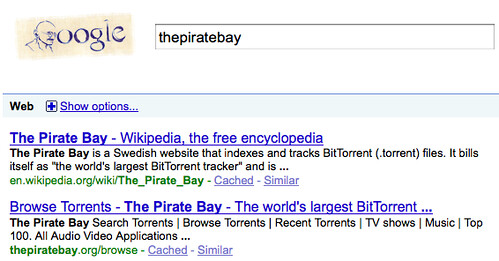 As I explained, just scroll to the bottom of the page and you will see this notice:

In response to a complaint we received under the US Digital Millennium Copyright Act, we have removed 7 result(s) from this page. If you wish, you may read the DMCA complaint that caused the removal(s) at ChillingEffects.org.

The interesting piece is that when you click over to view the actual complaint, the message I get is “the cease-and-desist or legal threat you requested is not yet available.” TorrentFreak reports that Destined Enterprises, the company that reportedly sent the DMCA notice, denied doing so. In fact, Destined Enterprises lawyer drafted a letter to Google asking them to show proof that they made such a request. Basically, they are worried that someone is using their name to make such requests.

Was this some type of fake DMCA request? Is this the new way to get competitors or sites out of the Google index? You thought search spam was bad, but to go through the legal route?

You can read more about this at Techmeme.

Postscript at 3:25pm (EST): The site is now back in the number one listing on Google and Google has updated the DMCA response at the bottom of the page to show two less pages.

Postscript 2: According to a statement Google gave CNET, the removal was a mistake due to a “request that erroneously listed thepiratebay.org” and that it would be restored. As CNET points out, Google’s not clear on how exactly this mistake transpired.