Contrary to some earlier reports, Google’s new Friend Connect, launching today, is not focused on data portability or a direct answer to MySpace “Data Availability” or the new Facebook Connect. While there’s a data portability dimension, it’s focused on the flip side of the equation: site owners who want to make their sites more “social.” […]

Contrary to some earlier reports, Google’s new Friend Connect, launching today, is not focused on data portability or a direct answer to MySpace “Data Availability” or the new Facebook Connect. While there’s a data portability dimension, it’s focused on the flip side of the equation: site owners who want to make their sites more “social.” Accordingly, it’s more like a Ning competitor.

Right now Friend Connect is in a very limited beta with a few “white listed” sites. However, eventually, site owners will be able go to a wizard (available here later today), select “social gadgets” or modules, and get code that will quickly allow them to add those features to their sites. Those include “registration, invitations, member galleries, message posting, reviews, as well as third-party applications built by the OpenSocial developer community.” Google said that they’re starting with a core group of social gadgets but developers are expected to build out a wide array of gadgets over time. And with a few tweaks, any application currently built on or compatible with the OpenSocial platform can be modified to work with Friend Connect.

While OpenSocial works with a range of high-traffic sites and networks, Friend Connect will help push related applications out to smaller publishers and the so-called “long tail.” There’s no hidden monetization scheme or even options available to publishers using Friend Connect. It’s possible that Google Gadget Ads could be made available to publishers in a parallel gallery over time. (But I actually suggested this during the call with Google, not the other way around.)

Now back to data portability: Friend Connect will allow me to sign in using OpenID, and I can invite contacts from my various networks to join me on Friend Connect-adopting sites. In addition, users’ activities on Friend Connect sites can also be shown in news feeds on their other networks.

Google says it developed Friend Connect “to lower two barriers to the spread of social features across the web. First, many website owners want to add features that enable their visitors to do things with their friends, but the technology and resource hurdles have been too high. Second, people are tiring of needing to create new logins and profiles and recreate their friends lists wherever they go on the web. Google Friend Connect offers a solution to both of these issues.”

Since the site/wizard isn’t live yet (neither are example sites), here are a couple of screenshots provided by Google. The second one illustrates how FriendConnect social gadgets may look on sites: 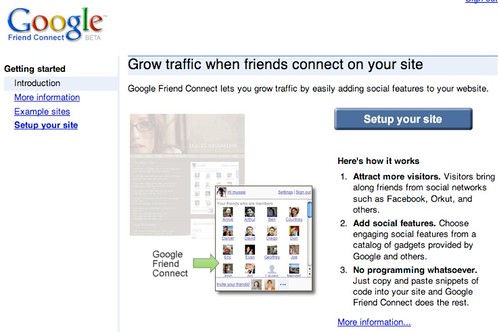 Collectively, the various data portability initiatives, as well as efforts like Friend Connect, which make it easier to integrate social features into sites, are helping transform the broader Internet from a publishers’-centric model (i.e., “walled garden”) into something more fluid and permeable.