Google has unveiled a new Living Stories are, where the New York Times and the Washington Post are experimenting with how coverage of a particular news story would look if content was all centralized within a single page. The experiment puts into practice a vision that Google has long expressed previously as “Living URLs,” a […]

Google has unveiled a new Living Stories are, where the New York Times and the Washington Post are experimenting with how coverage of a particular news story would look if content was all centralized within a single page.

The experiment puts into practice a vision that Google has long expressed previously as “Living URLs,” a single page that not only consolidates coverage of a news story but also which recognizes who you are and your “read state,” so as to show you only the newest information. My two articles below provide further background on the Living URL and read state concepts:

So how’s the vision translate into reality. Very experimental, definitely. For one, this is definitely not a replacement for wherever you currently go for a general news update. Right now, there are only eight stories shown in total on the Living Stories home page: 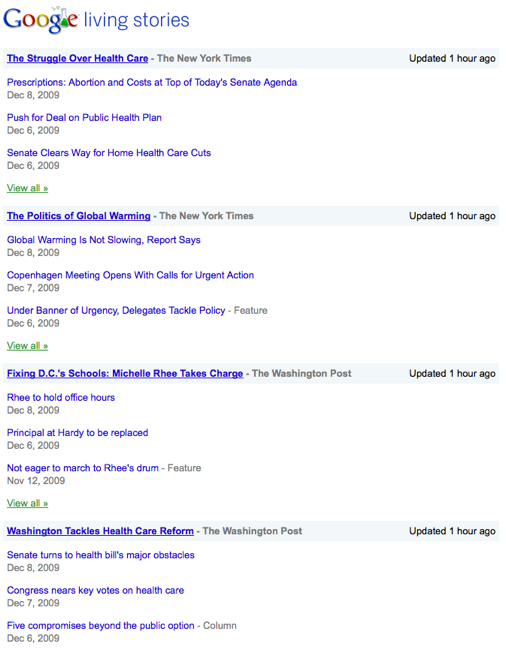 The screenshot shows the first four, but in total, there’s:

I don’t live in Washington DC, so schools there aren’t a big concern to me. My own local area has its own school problems. Nor do I care about the Redskins. Huge windstorms hit my area last night. There’s no news of that here. Clearly, this isn’t the place for me to start my day.

The content will grow, of course, and it’s not fair to expect this as a replacement for the New York Times itself, or the Washington Post or Google News, for that matter. The focus of the experiment is on telling individual stories. Can this be done in a way that better takes advantage of the technology that the web offers.

I chose to explore the health care story from the New York Times. I’m interested in the topic but have felt out of the loop recently. A Living Stories page should be perfect to get me up to speed: 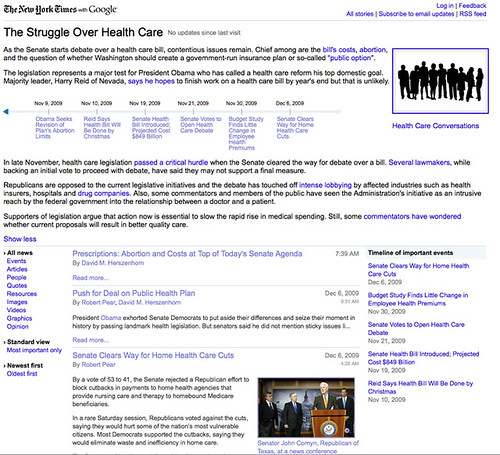 That page leads with a helpful summary at the top, followed by individual stories listed below. Interesting, but at first glance, it’s not something that stands out much from what you’d find at smart newspapers already. In fact, the New York Times already has a heath care “topic” page like this already.

Still, this page is designed to have smarts. It supposed to recognize you, what you’ve seen and reflect only the crucial changes.

The summary, for example, is written by editors. It will constantly be rewritten by them. If you return and there have been substantial changes, any of those changes will be highlighted, by comparing the last summary you’ve seen with the current one.

As for the individual stories on the page, they’ll be shown with dark blue headlines when you first come, then they shift to light blue ones when you return, to indicate you’ve seen them before. Any new stories, those will be shown in dark blue.

It’s kind of confusing, however. You may not have actually read the individual stories. The Living Stories page assumes you know what’s contained within them, but it makes that assumption even if you’ve not actually clicked to open some of them that will be closed.

Open stories? Closed stories? Yes. By default, some of the individual stories will be opened up. These are ones considered more important by the editors, Google says. Some will show only a headline. Click on that, and you can read the story.

For example, here’s how I expanded out the top story listed in the Health Care Debate topic from the New York Times: 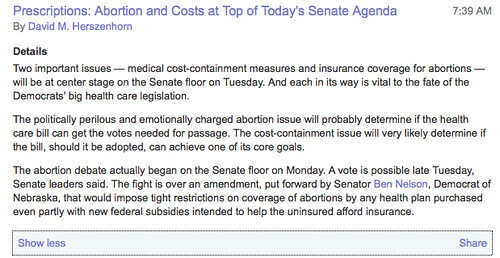 This also leads to another point. That’s not the full story, nor can I even get to the full story from Google Living Stories. The full story is here, much longer, and there’s no link to it. What’s up with that?

Google senior business product manager Josh Cohen told me that it’s up to the content partners on how much they want to show. In this case, the New York Times probably made the decision that the top portion of that story was enough — that the remaining part was all background that they figure is covered in other ways on the Living Stories page. He also confirmed that there’s no linking out from Living Stories pages to individual articles. That’s part of the experiment. Entire stories can be shown, if they wanted, but the idea is to integrate everything into a single URL.

But what if you want to pass around a key article? There’s a “Share” link below them that will allow you to jump people directly to them on the Living Stories page.

You can do more than get a list of stories. Options on the side allow you to shift the view to reflect things like Events, Articles, People, Quotes:

How is this filtering done? At the moment, editors at the two participating publications tag up their content so it can be filtered this way, Cohen said. Over time, automation might be used to do things like multimedia or quote extraction.

Each page has a timeline of events that’s interesting but may not be complete as you might think. For example, does the health care debate in the US really begin on Oct. 14, 2009? That’s as far back as you can go with the New York Times page:

Cohen said the timelines reflect what content editors choose to add to the pages. They can go back as far as they like. But he also spoke to the idea that each page is designed to reflect a particular aspect to a topic, not everything about it:

“This is trying to cover an arc of a story, the legislative aspect of it,” Cohen said, of the New York Times’ page on health care.

Story arcs? Before I explain more, let me set some definitions:

Cohen sees Living Stories as working to cover stories in the definitions above, not topics. So all discussion of health care in the US isn’t covered. Instead, the progress of a health care bill is on story arc; there will be others covered on other pages.

“The lifespan of living story would be longer than individual of articles that are part of it but shorter than a topic page,” Cohen said.

When does that happen? How do you know when to create a new story arc page? That’s what the experiment is testing.

“It’s something that I don’t think we have the answer to yet. We’ve tied to draw some distinctions here. We want to see how this works,” Cohen said.

Want to keep up on a story? As mentioned, there are visual cues designed to highlight changes. You can also subscribe to updates via email or RSS. However, these aren’t so smart. They’re merely updates of when new stories are added to the page, which isn’t that much of a change than what you can currently get from many newspapers now.

How about the inevitable ads question? There aren’t any now. Will they come?

It’s an experiment. That’s what it’s about [now]. If over a longer time, if this is valuable to publishers, I would presume there would be ads on it,” Cohen said.

Cohen also said that while only two publishers are part of the program now, that could also change over time.

“The goal all along has been to make this broadly available not just to these two but to anyone. We want to see if it’s something that’s useful and if it is, we’ll decide what type of tool to make available to everyone,” Cohen said.

By tool, that doesn’t just mean one that makes Living Stories that live on Google but instead that could be hosted on the publisher’s own web site.

For now, those, hosting is on Google — and those stories are also not blocked from Google’s spiders, so it’s possible they’ll start ranking well for various topics in general web search (but not in news search, as Living Stories is not a source there, Google told me). That’ll open up other issues about whether Google is perhaps competing with news publishers through this experiment.

Google also has a video below that explains the concept more. Check it out, especially to understand how the updating system works. Right now, that’s the hardest thing to illustrate. The system is so new that it doesn’t yet have more information to update me with!