Google posted Q4, 2007 revenues that represented 51 percent growth vs. 2006. Quarterly revenues were $4.83 billion, compared with $3.21 billion a year ago. However, earnings and revenue per share fell short of analyst consensus estimates. The headline that everyone is repeating is that social network monetization is not performing as well as hoped by […]

Google posted Q4, 2007 revenues that represented 51 percent growth vs. 2006. Quarterly revenues were $4.83 billion, compared with $3.21 billion a year ago. However, earnings and revenue per share fell short of analyst consensus estimates. The headline that everyone is repeating is that social network monetization is not performing as well as hoped by Google (interpreted chiefly as MySpace traffic).

Below are more revenue numbers, slides, and selected highlights from the Q&A portion of the call.

Google Network Revenues – Google’s partner sites generated revenues, through AdSense programs, of $1.64 billion, or 34% of total revenues, in the fourth quarter of 2007. This represents a 37% increase over network revenues of $1.20 billion generated in the fourth quarter of 2006 and a 12% increase over third quarter 2007 revenues of $1.45 billion. 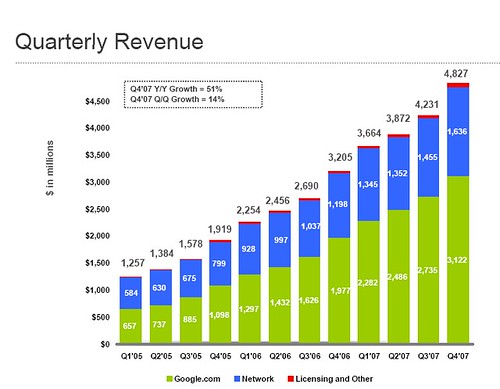 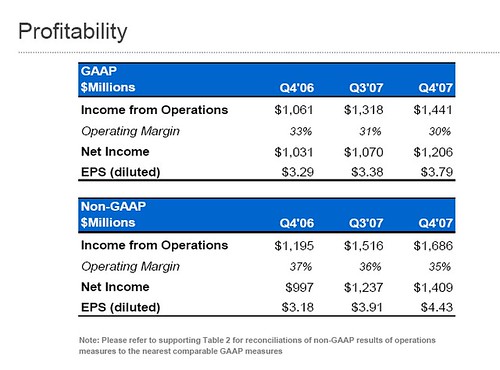 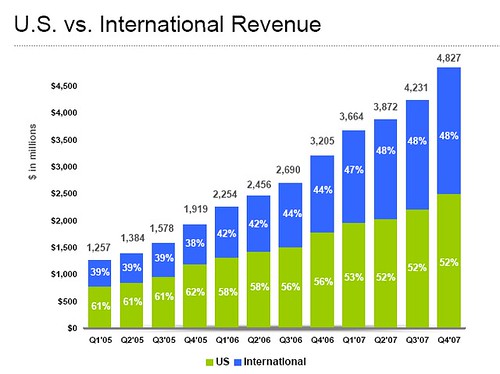 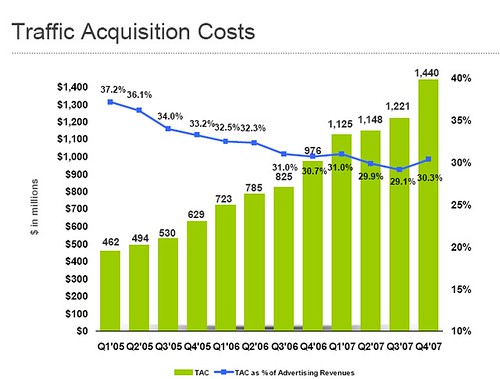 CFO George Reyes was the first to mention the social networking monetization challenges. The revenue shows up in the AdSense for content category.

Google co-founder Sergey Brin said, “We have a huge amount social networking inventory — MySpace, Orkut and about 20 others. There’s an incredible amount of inventory. It varies quite a bit in how it monetizes. We’re running lots of experiments. I hope to report more progress in the future.”

Google reported that it has roughly 16800 total employees. The majority of new hires are in engineering, “followed by sales and marketing.”

Brin and co-founder Larry Page recounted highlights of roughly 100 product launches and upgrades in Q4. Among them:

–Universal Search is now in 15 languages
–There’s an increased index and improved freshness and latency in non-English domains
–Gmail has a new infrastructure and increased performance. Brin added that the new infrastructure allowed for the development of eight new features in eight weeks.

He also mentioned that “almost as many people saw the November, Republican US presidential debate on YouTube as CNN.” YouTube is now in 17 languages.

Brin touted enterprise adoption of Google Docs by companies such as Genentech and various universities, including USC and Clemson.

On the mobile front, Brin discussed the introduction of “My Location” for mobile devices. He added that it’s now available in 21 countries and on four mobile platforms. Brin also discussed Google’s “Grand Prix” apps suite for the iPhone: “It’s had great uptake, it’s growing very rapidly.”

Brin also gave a “shout out to Android” and said that there are now 34 members of the Open Handset Alliance.

Google CEO Eric Schmidt fielded questions about mobile search and the 700MHz auction (which has crossed the $4.6 billion reserve price). He wouldn’t comment on the latter topic because “legislative rules” prevented it, but said that mobile search is “Growing significantly faster on a percentage basis than other categories.” Schmidt added that the “iPhone first in generation of products that are search intensive. And with more searches comes monetization.”

He speculated that “a majority of search will be on mobile or personal devices in 10-20 years.”

Schmidt was upbeat and “optimistic” about the outlook for 2008; however, Google doesn’t provide formal guidance.