Kayak travel search launched a formal attack on Microsoft’s Bing Travel yesterday in an article that appeared on Wired, Kayak to Bing: Stop Copying Us!. Apparently, Kayak’s executives are more than a little steamed by the eerily similar look and feel, and even went so far as to put Microsoft on legal notice (presumably a […]

Kayak travel search launched a formal attack on Microsoft’s Bing Travel yesterday in an article that appeared on Wired, Kayak to Bing: Stop Copying Us!. Apparently, Kayak’s executives are more than a little steamed by the eerily similar look and feel, and even went so far as to put Microsoft on legal notice (presumably a cease & desist) to knock it off.

Wired implies that Kayak is concerned about the similarities causing brand confusion with its users, and even noted an “uncomfortable” comparison in their own review of Bing, and points out that others have noticed as well. You can see further evidence of others comparing Bing vs Kayak from a variety of sources, including TechCrunch’s early review, where commenters pointed out that Bing Travel gave lower airfares than Kayak, though they use the same airline data sources.

“We are discussing the matter with Kayak,” Burk said in emailed statement. “Bing Travel is based on independent development by Microsoft and Farecast.com, which Microsoft acquired in 2008. Any contrary allegations are without merit.”

However, the Farecast technology which Microsoft acquired is not the issue here, since Kayak does not run a similar fare prediction service, they are not claiming an infringement on technology, but just the user interface, namely Bing’s use of “sliders”.

Sliders have become a popular tool on many “Web 2.0” based sites, and Farecast did initially use them in design.  Last year, another start-up in airfare comparison, InsideTrip.com, debuted (May 2008) using sliders much like Kayak or Bing does. In Greg Sterling’s write-up, you can see the similarity: 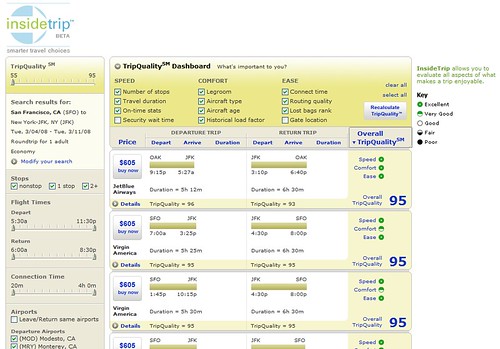 Note that InsideTrip was also founded by Dave Pelter, who held two year executive position at Farecast.com. Is it the fact that InsideTrip.com has not gained (or rather, sustained) enough traction for Kayak users to be as affected by the similar slider options?

Kayak isn’t the only one crying foul, as hakia also blogged when Bing launched, hakia claimed that Bing’s categorized search is a similar version to its own hakia Galleries, using the example of a search for “Obama”:

“hakia Galleries prove 17 aspects of this query. We save the user time by answering 17 Obama related questions in one search. Compare the hakia Obama gallery with the same search at Bing.com (Bing provides only 7 aspects of this search query).”

“We were approached by Microsoft to show them how the hakia galleries worked, and we did, and now they have a similar feature — we showed them how to do it,” she said. “We were surprised that it is a featured part of and the most differentiated part of Bing.”

Microsoft also denies that hakia had any part in the development of Bing’s categorized search, which Microsoft refers to as “faceted search”.