Microsoft Live Search’s xRank feature got some attention when it launched as a way to track celebrities. But you might not realize the service also now tracks buzz about musicians, politicians, and — yes — bloggers. Let’s go back, then forward. Last September, Live Search rolled out xRank. It showed you a list of the […] 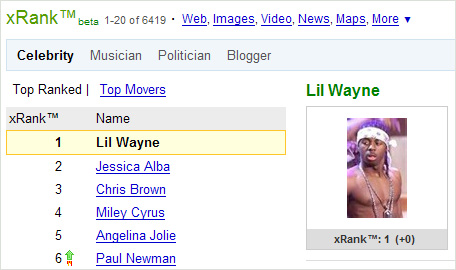 Microsoft Live Search’s xRank
feature got some attention when it launched as a way to track celebrities.
But you might not realize the service also now tracks buzz about musicians,
politicians, and — yes — bloggers.

Let’s go back, then forward. Last September,
Live Search rolled
out xRank. It showed you a list of the most popular celebrities "Top
Ranked" based on searches for them. You could also see "Top Movers," celebs
that were rising in the rankings. And you could chart buzz over time.

Lil Wayne is the top ranked celebrity at the moment, and you can see the
chart below showing he’s been number one for several weeks, with occasional
dips: 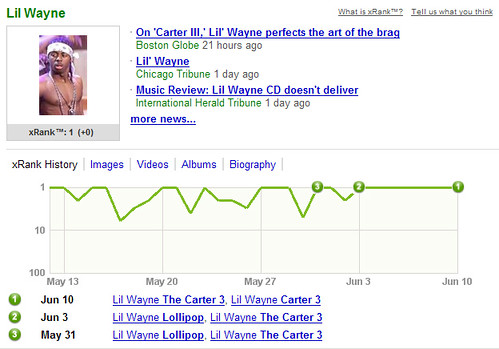 Tori Spelling (you go Donna!) is moving up, now at seven after interest
in the birth of her baby girl (congrats!).

xRank help pages, we get just a bit more about how all this is
calculated:

xRank keeps track of notable people and puts them in order for you. We
count Live Search web searches for movie stars, musicians, and other
famous people. Then, we compile our findings into an insightful ranking
formula that tells you who the world is searching for most. The result is
a cultural snapshot of who’s hot and who’s not!

covered a bit more about the celebrity search feature back in April,
stressing that it really is the number of searches that get people up tops.
What it doesn’t cover directly is that there has to be a master list of
"celebrities" behind the scenes. It would be nice to see that shown, the
full list of everyone tracked in the celebrity category, even if they aren’t
ranked.

Moving on, in May, Live Search

xRank Musician. Now you could get a top ranking of just music stars. And
by doing so, popular entertainment idiot me learned that Lil Wayne is
apparently a musician, because he’s still at the top of the list there. Tori
Spelling disappears — and hey! There’s Coldplay at number four. I do know
Coldplay.

I said Live Search rolled out xRank Musician in May, but I actually think
it was live at the end of April — Live just didn’t say anything then. So
were two other features that might not have been noticed before, but now

some are spotting as "new."
According to
Wikipedia, both

xRank Blogger were part of the service as of the April 25 Wikipedia
edit. So I’m pretty sure these things were just live. Microsoft just didn’t
mention them.

Barack Obama is the top politician, followed by

John McCain, so there are your early election results! Meanwhile on the
Blogger rankings, it’s

Perez Hilton who is number one.

Since more of our readers are likely to be bloggers rather than
celebrities, musicians, or politicians, how can you find yourself? You could
next your way through the results 20 at a time. But it’s easier just to
search for yourself on the service. At the moment, there are 305 bloggers in
totally being ranked.

For fun, I wondered how our Search Engine Land bloggers fare.

Greg Sterling at 165 (and that’s soooo not his picture!), then

Barry Schwartz at 305. Someone search for Barry a lot. He really takes
these lists seriously. :)

One more thing. You have to be using the US version of Live Search to see
some of these additional categories. Use the well-hidden
Live Search Country
Picker Page to make that change.