Ah, math. It’s why I became an English major. But now math is spinning back around and haunting me in the form of my fifth grader. Last night, I found myself dealing with how to multiply fractions as part of helping with his homework assignment. Um, yeah, I think I remember how. But to be […]

Ah, math. It’s why I became an English major. But now math is spinning back around and haunting me in the form of my fifth grader. Last night, I found myself dealing with how to multiply fractions as part of helping with his homework assignment. Um, yeah, I think I remember how. But to be certain, could search engines help as a double-check? Enter the awesomeness of Wolfram Alpha.

Doing math through a search engine isn’t new. One of Google’s earliest parlor tricks was allowing people to enter math problems into its search box and get answers. Indeed, I use it for this more than my pocket calculator, these days.

You can do a wide range of functions using the Google Calculator. That “More about calculator” link in the screenshot above unfortunately takes you to this entirely unhelpful page. Instead, read this page buried in the Google help files to discover how the Google Calculator can do trigonometric functions, logarithms and factorials.

I thought I was explaining how to do them right, as we worked through the homework exercises. But was there a quick way to double check? Well, I tried Google and got back:

For those who can’t see the screenshot above, that was:

That’s correct in decimal form, but the exercise required the product to be expressed as mixed fractions.  You know, a whole number followed by any fractional amount. C’mon, we all remember that.

I know that Bing also does math, so I tried things over there. I got back:

Again, for the screenshot-challenged, Bing processed my calculation like this:

Instead of doing fractions, Bing made some odd assumptions that I just wanted to multiple or divide the numbers that were next to each other. So, I tried it another way:

That just gave me a bigger mess:

And the text version:

This time, the space between the whole number and the start of the fraction was removed, completely changing what I entered.

For those who want to read more about Bing’s calculator, see the Bing help page here. It can do a lot of functions even if it didn’t get mixed fractions multiplication right.

By the way, Bing does do fractions better than Google — that is, if you want a simple fraction expressed. Consider this:

On Google, that’s expressed as a decimal form only. But on Bing, you get both decimal and fractional forms:

As for the homework assignment, I gave search engines one more shot to help, this time using one that was built by a mathematician, Wolfram Alpha. How’d that go? For the example above, I got back this: 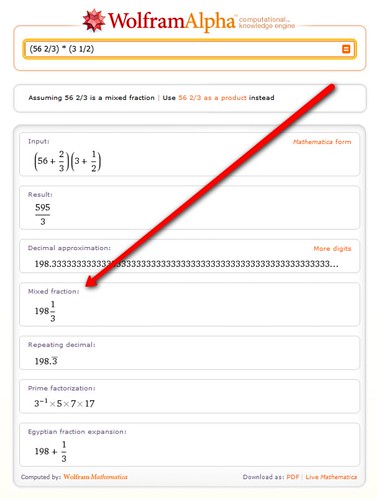 Awesome — multiple forms of the same answer. A decimal form. A fractional form. And what I wanted, the mixed faction answer:

I’m not sure if Stephen Wolfram’s grand ambition with Wolfram Alpha was for it to help me and my son figure out the multiplication of fractions. But it was sure useful!