Microsoft today released version 2.0 of its Live Search API, also called “Silk Road,” that offers support for multiple data exchange protocols, access to more search resources and the ability for developers to pull in ads to help monetize search applications they build. The previous version of the Live Search API only supported SOAP as […]

The previous version of the Live Search API only supported SOAP as a way to pull search information into a site or application. The new version supports JSON, RSS and XML.

The types of search data that can be retrieved and used have been expanded. In addition to things like web search results, spelling suggestions, images, news articles, feeds and phonebook results, the new API allows access to related searches and Encarta encyclopedia references. Reranking of results is also supported. There’s also no restriction on number of requests.

Microsoft ads can now also be pulled in through the API, helping developers produce applications that earn them money. This is the first time Microsoft has more broadly allowed ad distribution outside a small network of publishers that it negotiates or those in the limited Microsoft adCenter Publisher Program. In contrast, anyone can sign-up to carry Google ads through its AdSense program, which allows publishers to carry contextual ads (ads that appear based on the context of a web page) as well as show search results with ads alongside them using AdSense For Search.

Beyond Google AdSense, Google Custom Search Engine allows for search results to be more tailored and carry ads. This puts Microsoft’s new API as much more a challenge to that, not to mention Yahoo’s BOSS. See our past article, Yahoo Lets You “Build Your Own Search Service”, for more about that service.

To date, BOSS still doesn’t allow monetization of search applications built using it. More important, the success Yahoo pitched when BOSS initially launched has yet to materialize. The company has only a few examples of prominent sites using the service, which they once suggested would power up to 25 percent of all searches online. OneRiot (see Me.dium Changes Name To OneRiot, Launches Social Search Engine) continues to be the main poster child for BOSS, and it has what seems to be minimal takeup, at best.

Microsoft, when I talked with them about the new API yesterday, sounded similar to Yahoo in how they hoped it might change things. But if Yahoo hasn’t seen a great success, why does Microsoft think things will go so much better for them?

For one, Microsoft said it has a strong developer community. True — though these are more software developers rather than web developers. Perhaps we might see Microsoft grow as a search resource pulled into software applications, I suppose. But on the web, I’d say plenty of developers are aware of offerings from both Google and Yahoo, yet we still don’t seem to have had APIs be a major game changer in growing search share (applications that pull from Google Maps and Microsoft’s Virtual Earth seem to be the main exception, to me).

When I asked about major API users out there now, Microsoft put out names like Facebook, SAPO in Portugal, China Telecom and Viacom. But these are really search syndication partners, not your more classic API users. Indeed, only Facebook is actually using the API itself, Microsoft said. And looking at a search on Facebook versus regular Live Search, I can’t see that using the API is helping Facebook that much. Rankings are slightly different, but the main usage seems to be matching Live Search results to Facebook’s look and feel.

Overall, I’m sure developers will welcome the upgraded API (be sure to check out the Live Search Developers Center for more). Perhaps we’ll see some of them use it for web apps, such as how Microsoft is now demoing how you can search within Hotmail and drag-and-drop results into your email.

That’s interesting. For example, you can search for restaurants right within Hotmail, then insert the result into a mail message. The same is true for other things, like movie times. In the screenshot below, notice the links to the right of the message compose window:

If you click on something like movie times, you get results (with your location being guessed at): 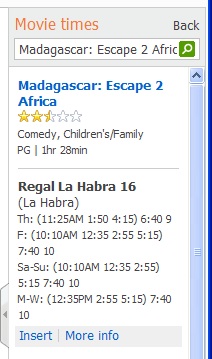 Clicking insert copies the information over to your message: 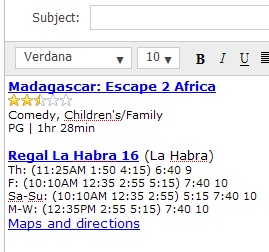 As an aside, some annoyances. I couldn’t find some restaurants I know exist, and there doesn’t seem to be a “remember my location” option.

More important, many “external” search tools such as Google Maps allow you to find information and then email the results. That’s not quite the same as treating a search result as an “object” within an application — which is useful! — but it’s not an entirely new direction being introduced here.

In general, the new API seems an incremental step toward growth rather than a major leap that many people keep hoping for. But incremental is fine — that’s more likely how anyone may eventually build share against Google, through a lot of little incremental moves.