Did you know there’s a way to tag links on pages to indicate social connections? I’d heard about this vaguely, but you can bet there’s going to be much more public awareness and potential use, thanks to Google launching its new Google Social Graph API. Now available, the API allows developers to discover socially-labeled links […] 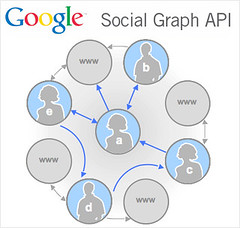 Did you know there’s a way to tag links on pages to indicate social
connections? I’d heard about this vaguely, but you can bet there’s going to be
much more public awareness and potential use, thanks to Google

"We want to make the connections searchable. We think there are a few things
people will do with that.
We think they’ll build some [social linking] exploration tools," said David
Glazer, a director of engineering at Google who oversees the company’s
OpenSocial effort.

The API lets developers locate links that make use of the
XFN and
FOAF labeling systems. XFN is pretty
easy to understand. If I wanted to link to my personal blog and indicate it was
mine, I could do it this way:

See the code underneath the link? That’s the code used to make the link. The
rel="me" part says that I’m pointing at something that is me, i.e., that the
author of this page says belongs to me. There is a
list of 15 types of relationships that can
be defined, such as someone who is a co-worker or someone you have a crush on.

Very few people use these labeling mechanisms, Glazer said. However, they
exist out there in a variety of tools that add them without you knowing.

On it, you’ll see that my profile box lists this for my web address:

Look at the code in that link, and you’ll see Twitter automatically labeled
the link as "me" without me even realizing that. Other tools like LiveJournal,
WordPress, and Vox do similar labeling.

Developers can harvest this data and play it. Glazer stressed that Google has
no idea what will be done with it. The company is just putting the ability to
mine its index out there and seeing what comes of it.

Even if you’re not a developer, you can have some fun playing with the API.
There some forms you can use to explore page connectivity
here.
Note that they aren’t working properly for me right now, but that will likely be
corrected soon.

In the example below, I entered the home page URLs for my work site (searchengineland.com),
my personal blog (daggle.com), and my Twitter profile: 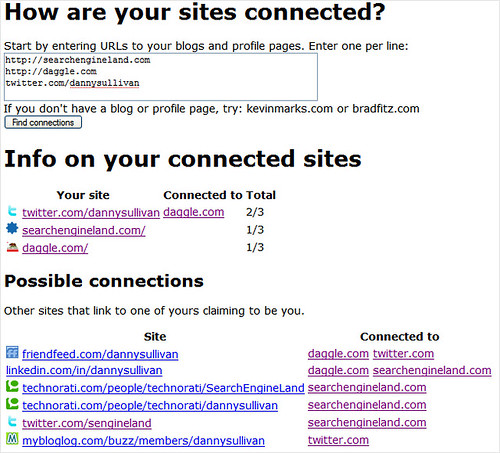 It came back to tell me based on link data that Twitter was explicitly saying
it was connected to Daggle (so 2 out of my 3 sites were connected there). But it
couldn’t find a connection between my sites and Twitter (which is the case). I
could easily correct that and build up my linkage if I wanted to. I haven’t
because, at the moment, there’s been no compelling reason to do so.

Note that it also found other sites claiming a connection to me, such as my
FriendFeed, LinkedIn, My Blog Log, and Technorati profiles. These are all again
places (I assume) where because I’ve listed URLs, the "me" attribute has been
added. Another tool can show those who link to me as a contact.

My chief concern was what happens if someone wants to "fake" being me. Glazer
said this is difficult because of the number of links I can control will tend to
outweigh anyone else. Being dubious of meta data in general, I still want to go
hmm, we’ll see. But since we don’t even know what apps will make use of this
data, it’s a bit early to worry.

One chief advantage that Glazer said that may emerge is that if people do
more tagging, it may be easier for them to go to any social platform and have
their profiles be autofilled. Indeed, even if they don’t tag, this could happen.
For example, you might sign up for a Twitter account, enter your blog URL, and
Twitter could use the API to scan for anything connected to your blog (such as
LinkedIn, etc.) and prepopulate fields. It’s something that Vanessa Fox

wrote a long post about wishing could happen, and perhaps it really will
happen.