Last month Google ran an experiment “to understand what the impact of the proposed EU Copyright Directive would be to our users and publisher partners.” News search results showed links but no descriptions or images, incomplete story titles and site titles without any context.

The naked SERP. The experiment previewed changes in the SERPs that Google intends to make in response to Article 11 of the Directive, which requires search engines and news aggregators to pay licensing fees when snippets of third-party publisher content are presented.

The directive aims to “harmonize” copyright law across Europe (and subsidize publishers). It has been praised by many large European publishers but also criticized free-speech advocates and many smaller online publishers. 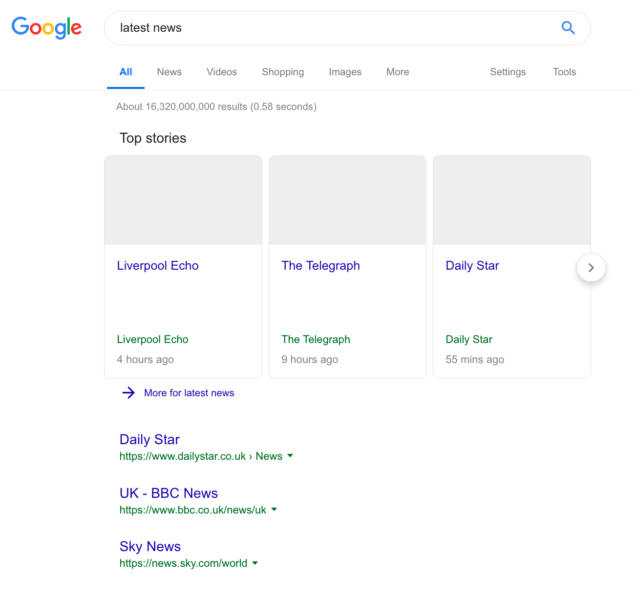 Nearly half of all clicks disappeared. Google is now reporting on the results of its EU SERP experiment. According to Google’s blog post “all versions of the experiment resulted in substantial traffic loss to news publishers.” The company explained, “where we showed the publication title, URL, and video thumbnails,” there was a 45 percent traffic reduction to news sites.

Google is saying this is “another unintended consequence of legislation that aims to support high-quality journalism.”

Google is suggesting that Article 11 allow traditional SERPs with ” limited previews—whether text-based snippets or other visual formats like thumbnail photos,” to encourage clicks. It also wants publishers to have the option to waive licensing fees.

Some proponents of Article 11 probably fear waivers would result in news SERPs that prioritized sites that have waived fees. However, Google says, “If it’s only payment, and not quality, that decides which headlines users get to see, the results would be bad for both users and smaller and emerging publishers.”

Why you should care. Google obviously anticipated that the naked SERP experiment would yield fewer clicks to publishers, in order to make the argument that the Article 11 language should change. Yet publishers cannot force Google to show their content in order to extract licensing fees.

There is a probably better approach that can be negotiated than the one about to be implemented. The social-policy issue of supporting journalism could be separated from the discussion surrounding balancing copyright interests with “fair use” of news content in SERPs.