Search Engine Land » Channel » PPC » Is It Time To Revisit Your PPC Strategy For Tablets?

Is It Time To Revisit Your PPC Strategy For Tablets?

Going by the last couple of months, the humble tablet computer is playing an increasingly pivotal role in the strategic plans of many of the biggest names in tech, and it will continue to hold greater significance to paid search advertisers as we move toward the holiday season. Following the March release of the new […]

Going by the last couple of months, the humble tablet computer is playing an increasingly pivotal role in the strategic plans of many of the biggest names in tech, and it will continue to hold greater significance to paid search advertisers as we move toward the holiday season.

Following the March release of the new iPad, the tablet market enjoyed a few months of relative calm before the heavy hitters began rolling out a new wave of devices that they hope will finally make serious gains against Apple’s dominance in the space.

In mid-June, Microsoft announced it would co-opt its own Surface moniker for two new tablets due in October, one of which will utilize the touch-friendly Windows 8 OS. Two weeks later, Google announced its first self-branded tablet in the Nexus 7, which hit the market shortly thereafter.

Not to be outdone, Amazon, which has already had the most tablet success outside of Cupertino, announced and released a new line of Kindle Fire tablets earlier this month, including a larger model to compete more directly with the 9.7″ iPad.

Meanwhile, the speculation is that Apple will soon be moving in the other direction with an iPad mini, which would give it a foothold in the lower price-point market where the original Kindle Fire found its niche.

Also, despite its devastating legal loss to Apple, Samsung can’t be written off entirely either, as it moves to play off the relative success it had with the Galaxy Note, but in a more traditional tablet form. Now, even Toys ‘R’ Us is reportedly getting into the game with a low price tablet option.

Tablets Already A Significant Segment Of The Paid Search Audience

From the beginning off September through the end of 2011, tablets roughly doubled their share of total paid search traffic. All of the companies above would love to see that feat repeated this year − so long as that growth is driven by the success of their own devices.

As of mid-September of this year, tablets are generating nearly 10% of all paid search clicks, up from between 7-8% immediately following last year’s holiday surge. As a segment of the average paid search program, that is approaching about 2/3 the combined share of Bing and Yahoo, which should move it up our list of priorities, particularly for well-built, established programs. Trouble Is, Strong iPad Conversion Rates Are The Exception

A couple months after the original iPad premiered, RKG published results showing shoppers using the tablet converted about on par with desktop shoppers. That conventional wisdom for tablets has been unchanged in the more than two years since. But while the tablet market was the iPad market for all intents and purposes until late last year, that has changed, and so should the conventional wisdom.

In a follow-up study earlier this year, RKG found significant variance in the conversion metrics across different tablets, and those differences could weigh heavily on search marketers if the latest crop of iPad challengers can gain appreciable share over the next few months as they did last holiday season: Google’s Nexus 7 hasn’t made a big impact like the Kindle Fire, but the holiday season could change that.

While the iPad continues to deliver revenue per click (RPC) on par with desktop search, the growth of its competitors is driving down the click value of the overall tablet segment: If we’re segmenting and bidding tablets as a unified group, the arithmetic suggests we are undervaluing the iPad by about 6% and overvaluing the other tablets by over 100%.

To date, the facts that this segment was relatively small (non-iPad tablets still generate just over 1% of paid search clicks) and the process for bidding segmentation is cumbersome (requiring duplicating campaigns rather than our simply being able to apply an adjustment to a core bid), have made these margins of error acceptable to most.

But, what happens if the iPad competitors generate 2, 3, or 4% of traffic by the end of the year?  For those who haven’t already, it may finally be time to address this performance discrepancy with finer segmentation.

Although the manner by which we must segment different audiences isn’t ideal, the targeting options we have with the engines are commendably robust, particularly on Google. Already allowing advertisers to target users by their mobile OS − where Bing Ads is today − and even specific OS versions, AdWords added the ability to target specific devices in June.

For most programs, this is probably a little bit of overkill at the moment, but if individual tablet competitors do begin to make headway, it could be a valuable option. 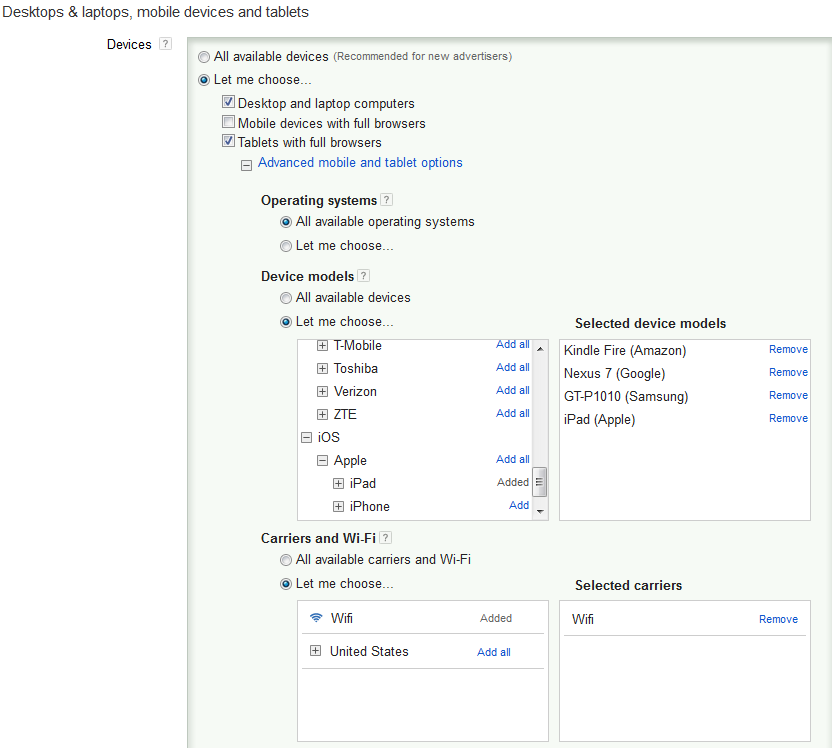 Taking the simple case of an advertiser only concerned with bidding segmentation (i.e., they are not promoting an app and they wouldn’t benefit from different copy, landing pages, or geo-targets for different devices), a good bet for now would be to group the iPad with desktop and allow the other tablets to fall into a single mobile bucket with smartphones, which convert more similarly.

As the goals of an advertiser take on more complicating factors, such as the aforementioned app promotion or supporting brick and mortar locations, the advertiser will need to layer in additional tiers of device segmentation.

A Shift In The Months Ahead?

One of the bigger tablet questions that remains without a satisfactory answer is the extent to which the observed conversion differences are driven by the differences in the devices themselves or the demographics of their users.

Fortunately, we should get a much better perspective on this in the next few months, especially if Apple does release a smaller version of the iPad.

When RKG originally found the Kindle Fire converting at relatively poor rates, we speculated that, among other factors, the smaller screen size and the comparative sluggishness of the device may have impeded shoppers from using it to complete purchases online. We also wondered whether Fire users were just more frugal than iPad users or more likely to buy from Amazon over the competition. While the new line of Kindle Fires hasn’t been available for long, we have seen early results that suggest the Kindle’s performance for paid search advertisers is improving.

Unfortunately, if Apple puts out a massively successful iPad mini, but it doesn’t convert as well because of its smaller form factor, we’ll have to revisit this issue all over again.