As the campaign progressed many pundits were taken aback by the way in which the candidate had managed to use the net to mobilise supporters in a way never seen before. By allowing supporters to take his core values and messages, tweak them and broadcast them in whatever way they saw fit (such as the […]

As the campaign progressed many pundits were taken aback by the way in which the candidate had managed to use the net to mobilise supporters in a way never seen before. By allowing supporters to take his core values and messages, tweak them and broadcast them in whatever way they saw fit (such as the video below which was submitted to a YouTube competition), he had made this the first UGC campaign.  By taking citizen journalists seriously, he had ensured that the bloggers were on his side. And by utilising social networks, he had made sure that his supporters were organised in such a way as to maximise his vote.

Who am I talking about? Obama, surely? Well, actually, no. Howard Dean. As these articles from The Guardian & Wired detail, Howard Dean was in many ways the test bed for many of the tactics that Obama’s team used to make the most of the web as a campaigning tool. And Dean was building on the learnings from the original, innovative Presidential campaign to use the web – that of a certain John McCain, back in 1999.

So what does this tell us? That Obama is all flash and that his much vaunted utilisation of the web to amass unheard of funds and to mobilise thousands of volunteers, was all hype? Absolutely not. It tells us that just because something has been done before, that doesn’t mean it can’t be done again, and better. On inauguration day, let’s look at some of the things that Obama did, how he built on the successes of others, and what brands could learn from one of the greatest marketing campaigns of the 21st Century. 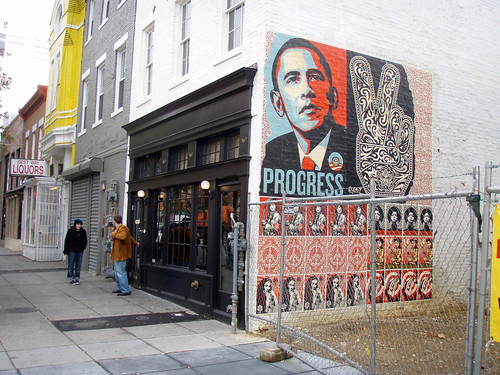 There are of course many more lessons to be learned from the Obama campaign, as well as those of his opponents. Because what all this also proves is that if the message doesn’t match the brand and isn’t right for the audience, then noone will buy it. For what really differentiates Obama from those who went before him, such as Howard, McCain (in ’99) and even Ron Paul, is that he got elected and they didn’t.

*This is not a political post so I make no comment on the validity of the stories circulated by the Republicans or the Democrats. I’m just interested in how they used the web to do this.