Purchases on Google quietly opens beta for requests in US Google is opening the beta for its “buy button,” dubbed Purchases on Google. Sales & Orders reported finding the option in Merchant Center Tuesday.

Google hasn’t made an announcement about it yet, but advertisers can request access to the Purchases on Google beta via the Merchant Center Programs section in Google Merchant Center, which is accessible from the three-button menu drop-down. Google unveiled the Purchases on Google pilot nearly two years ago, in July 2015. The Shopping ads, tagged with “Buy on Google,” display on Android devices. Users with Google Wallet set up can make a purchase from a Google-hosted landing page after clicking on the ad. UGG and Under Armour are among the brands that have been participating in the pilot. Here is an example of an ad from UGG spotted last week: 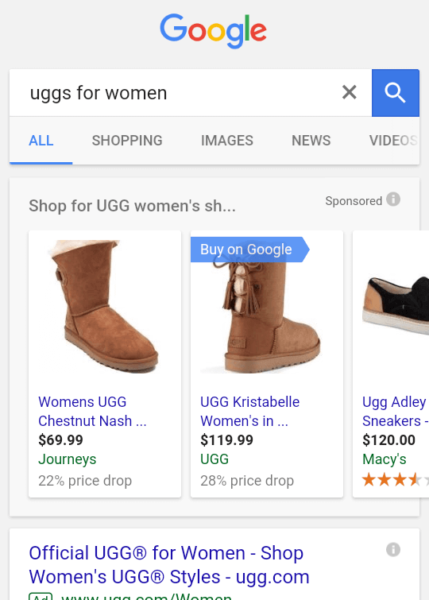 Google has remained pretty quiet about the testing, and it’s somewhat surprising to see it opening up at this time. The program has faced its share of challenges that come with integrating multiple systems, from tracking issues to data integrations to retailer concerns about being able to market to customers that buy via Google. Impression volume for these ads remains relatively low — in roughly the 20-30 percent range, I’ve been told by people involved in the pilot. However, Google extended the program to tablets a few months ago, added availability to more retail categories, and customers are now opted in by default to receive marketing and promotions from the retail.

The closed beta is open to US retailers only at this time. Those interested can request access through Merchant Center or by filling out the request form here.