After reading
yesterday about how savvy both US presidential campaigns seem to think they
are about search marketing, I decided I’m going to take a closer look at
watching them. In particular, I noticed yesterday that both seemed pretty
lame when it came to tapping into rising queries that you can spot on
Google Trends. That’s what I’m
going to be watching in particular over the coming weeks — and today’s a
good start. Google Trends is lighting up with searches for McCain’s vice
presidential pick, Alaska governor Sarah Palin. How are the campaigns
responding? Not so well.

First, here are some of the many searches for her happening now:

And there are many more! 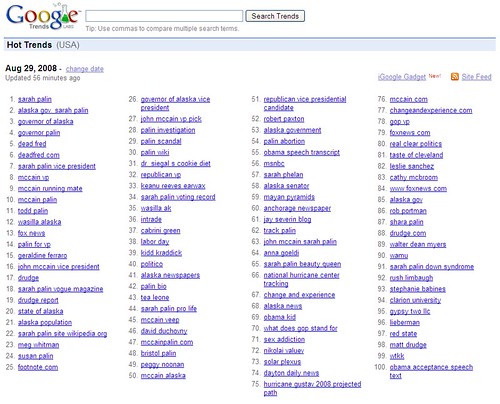 Let’s just go for her name and see how the campaigns are responding. For
a search on sarah palin at Google
(shown as "volcanic" in popularity according to Google Trends), we get:

Ooops! Neither campaign appears to have bought her name!

A search for just
palin doesn’t bring up ads from either, also. But this
got me an ad from the McCain campaign, 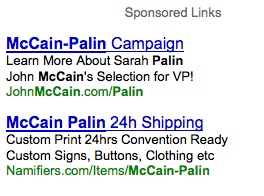 But I still give it a fail. Consider the landing page I get: 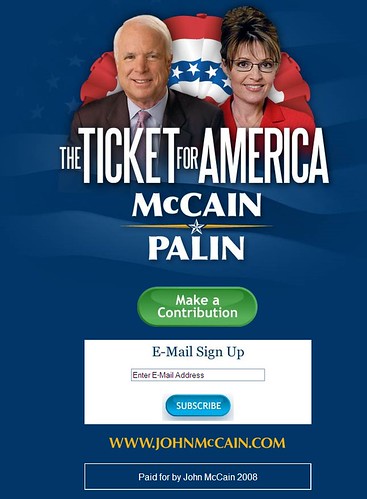 All these searches by people clearly trying to learn more about this
largely unexpected candidate, and McCain’s site gives me no information
about her when I click directly on his ad in search of that? An ad that expressly tells me “Learn More About Sarah Palin.” Nor does the Obama camp
even run an ad, much less directly me to a page with their response about
the choice?

Yes, the campaigns in 2008 seem to understand more about search than in 2004. Certainly they know about placing the ads, but they seem to have much more to learn about the other key aspect of search marketing — converting people by showing them what they wanted, when they arrive.