Microsoft’s Live Search Cashback program has failed to grow the company’s search traffic significantly (as I expected), so now it’s try again time. Out officially today is SearchPerks, a program designed to be easier to use and more broadly targeted than Cashback. Microsoft says SearchPerks was already in the works and isn’t a successor to […]

Microsoft’s Live Search Cashback program has failed to grow the company’s search traffic significantly (as I expected), so now it’s try again time. Out officially today is SearchPerks, a program designed to be easier to use and more broadly targeted than Cashback.

Microsoft says SearchPerks was already in the works and isn’t a successor to Live Search Cashback. Run quietly as a small pilot program for the past nine months, Microsoft says, SearchPerks is now open to the first 1 million people in the United States who sign-up before the end of this year (Microsoft originally told me it was limited to the first 250,000 people, but the site currently says the first million). 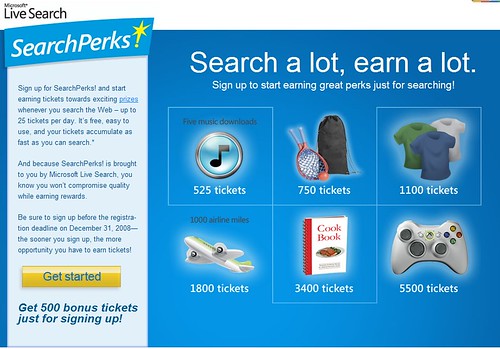 Those people will earn tickets for each search they perform, up to 25 tickets per day. Tickets can be exchanged for prizes, such as:

As you can see, the big prizes take some time to earn. But people have until April 15 of next year to build up tickets, plus there’s a 500 ticket starting bonus and additional ticket prizes promised.

A big issue I had with the Cashback program was how complicated it seemed to use (and when I tried it again about two months after launch, things still hadn’t seemed to change).

SearchPerks is much easier, except right off the mark, it irritated me by requiring Internet Explorer (why, Microsoft, why must you do this?). Try it in Firefox, and you’re told to go away. You also have to have a Windows Live ID to use the service.

OK, one reason it may be IE specific is that you have to install a “Perk Counter” into your browser. That sounds scary — what exactly is this counter tracking? Not searches or sites you go to, only things like banner ads you click on, says Microsoft:

The Perk Counter is a helpful tool that will keep track of the number of tickets you earn by searching as well as provide links to important SearchPerks! information, such as prize options, F.A.Q.’s and customer service. The Perk Counter also tracks some online activity, like clicks on banner ads. The Perk Counter does not track what you search for or which websites you visit.

But banner ads only on Microsoft? Or on sites across the web? If so, there’s some degree of web site tracking involved. The privacy page listed when you’re asked to install this wasn’t that helpful in clarifying matters. (Note: Microsoft now tells me that banner ad clicks are not measured at all, period, and that the site is being updated to reflect this). But the terms page was better:

The software records and sends to Microsoft the number of web Searches you do each day on different search engines; the types of Searches you complete, such as for news or images; and the number of online ads you click on. It also sends your Internet protocol address, the type of operating system, the language code of the operating system, the version of Internet Explorer, the version of the Perk Counter software you are using, and information about the browser you are using as well as which search toolbars, if any, are installed on the computer. The software also may collect information regarding the way you enter search queries for fraud detection purposes. The software does not record the search terms you use, the results you receive or the content of the ads you click on.

I’ve bolded the key parts. For something that supposedly “does not track what you search for,” that’s actually a lot of tracking. As you can see, actual search terms themselves are not logged, but that should be made clearer on the page where you install the software.

Should you avoid the program because of the tracking? Well, that’s a personal decision. Google already has plenty of people who voluntarily allow themselves to be tracked in greater depth in return for getting personalized search results and other features. So for some prizes? Some will figure why not.

Following installation, a confirmation page appears, complete with a suggestion to make Live Search your default search engine. However, this doesn’t happen unless you push the “Set Search Default” button: 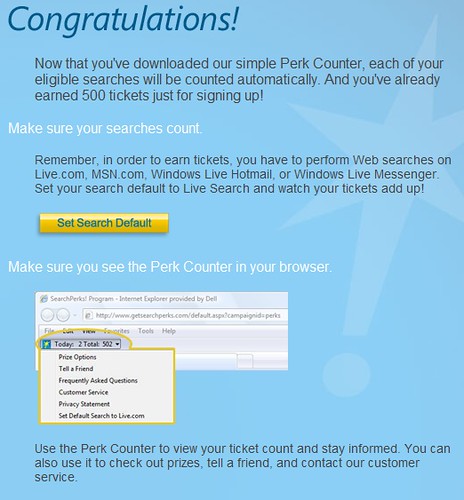 After that, it’s easy — so much easier than Cashback. You search, and the toolbar starts counting your total searches:

You currently get 500 tickets to start, and in less than a minute, I racked that up to 510 doing searches for real words or just hitting my keyboard to enter random characters.

That raises the issue of whether these are “real” searches. Microsoft has language in the program’s terms designed to penalize those using robotic queries to gain prizes, something that hit its past program:

A “Search” is the act of an individual user manually entering text for the good faith purpose of obtaining results for such user’s own research purpose, as determined by Microsoft. A Search does not include any query entered by a bot, macro or other automated or fraudulent means of any kind. Microsoft will determine what constitutes a Search and may limit the tickets earned for activities such as the repeated entry of the same search query term

No doubt some humans will do “real” searches that increase Microsoft’s search traffic but aren’t really being done out of an immediate search need. Deciding the fairness of measuring this type of traffic in search popularity stats is growing as an issue, and it’s something I’ll be returning to in more depth, in the future. Somewhat related are programs that generate what I’d call “curiosity searches,” such as the new hotspots on the Live Search home page or how all those special Google logos that people click on generate searches at Google.

Ready to cash out now? Hang on. According to the FAQ, you have to wait until about three weeks after the program ends, so around May 2009. And if you opt-out early from the program, you lose your tickets. Somewhat disturbing, there’s no online interface you can use to check the status of your points. It’s only reported in the toolbar, and as the FAQ explains, sometimes a reinstallation of the toolbar may be required. If that happens, your count goes back to zero even though supposedly, all your previous tickets are still recorded and ultimately available to you at the end of the program.

Will it work? Brad Goldberg, general manager of Microsoft’s Search Business Group, said that they’ve seen a threefold increase in search activity by those in the pilot program.

That makes sense. But what happened when people in those programs stopped getting incentives? Did they keep on? Microsoft said this hasn’t been tracked, which was surprising. That’s a key goal for this type of program, to me. But Microsoft is more focused on getting the word out about Live Search as a primary goal, as a first step to building loyalty.

“The program hasn’t been designed to try and keep them searching,” Goldberg said, explaining it’s more to have searchers give Live Search a real test. “Right now, people check us out for one or two searches. If they can check us out for 20 to 40 searchers, then we think we’re more likely to know if we can change behavior.”

Also, for those who’ve lost track, here’s a rundown on the various incentive-based search programs Microsoft has run or is still running:

Microsoft is not the first to try incentive-based programs. Some programs from others:

Some search engines have also paid out hard cash for searches, though these were to site owners that carried their listings. Back in 1999, Overture (then GoTo) started paying sites $0.03 for each search they generated. AltaVista, Lycos and even Google started doing the same.

Speaking of Google, it has run its own direct incentive programs. Both the Ultimate Search For Bourne and the Da Vinci Code Quest offer prizes through search-based games.

Google even had a frequent searcher program of its own that was tested briefly (and see here) in October 2003 with a small group of searchers. Google had even considered offering prizes, though these never emerged, and the program was quickly removed.

As for Microsoft’s new frequent searcher program, we’ll see how it goes. I don’t expect the program to be the game changer many may expect, something that suddenly propels Microsoft significantly higher in share. But it might be one of many small changes that could add up to improve Microsoft’s situation.