Since the announcement of Google Universal Search, I have been waiting eagerly to see videos show up within Google’s search results. Last night, it finally started. For me, it was for a search on star wars kid (here’s more about him). You can see the embedded video showing up in the middle of search results […]

Since the announcement of Google Universal Search, I have been waiting eagerly to see videos show up within Google’s search results. Last night, it finally started. For me, it was for a search on star wars kid (here’s more about him). You can see the embedded video showing up in the middle of search results in the screenshot below:

By clicking the “+ Watch video” option, a new box appears allowing you to watch the video within the search page: 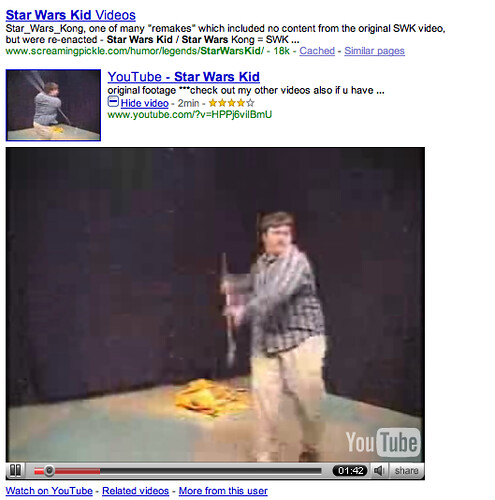 I am glad I see it, I suspect many others can see this as well.

Over at Google Video, something different is happening. Google Blogoscoped Forums spotted that video content from outside Google is now showing up. In other words, Google Video now has video beyond that hosted on Google Video or Google-owned YouTube.

We previously reported that this would be happening at Google Video in the near future, but it has come sooner than Google suggested it would be implemented.

An example is a search on rat monster joke in Google Video. You’ll see a video hosted at Metacafe showing up: 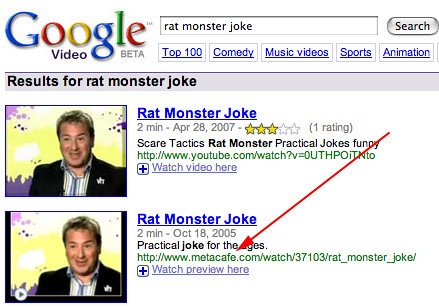 Look under the video thumbnail. Instead of a “+ Watch video here” option that appears for Google-hosted content, there’s a “+ Watch preview here” option. Clicking on that link lets you watch the video in the results: 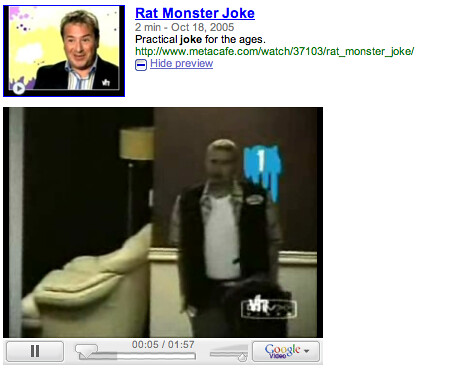 Even though the option says “preview,” it’s actually the entire video that is showing, playing within Google’s own video player. This means someone can watch the entire Metacafe-hosted video without visiting the Metacafe site.

Some are questioning whether this is fair or legal. It’s tricky, since many video providers commonly allow you to embed their videos (though usually using their own players). By using its own player, Google potentially could insert its own video ads that it has been testing.

Of course, Metacafe might be allowing this. We are checking with Google for comment, as well as for a full list of video sites now showing up in Google Video as well as Universal Search with thumbnails.

While Metacafe shows up within Google Video with a thumbnail and video preview, it does NOT show up that way in regular Google. Do a search there for rat monster joke, and a Metacafe video page is the first item listed. However, it has neither a thumbail image as universal search is supposed to provide nor the ability to expand and watch the video, as you can at Google Video. In contrast, a YouTube clip below in the same results can do both.

I suspect this is because the Metacafe listing is coming out of Google web page database, whereas if it was coming from the Google Video database through a universal search blend, then it would be treated differently. You can see this happening for Metacafe listings in a search for ronaldinho goals. A video thumbnail does show there. There’s no way to watch the video, but Google had said previously that watching in regular results would only happen for its own content.

Confused? It’s understandable and a flaw with Google’s system. Video content is accessed via web pages. That means the video content can be in two different databases — the web page database and the video database. Google is now blending video database results into its regular listings and enhancing those listings. However, video content is NOT being removed from the web database. That means those listings can also show up and not be treated in a unique fashion. The result is confusion for the searcher.

It’s also something that has Google competitors upset. They show video content that’s listed on web pages in their regular search results. Adding thumbnails and enhancing these “web” listings wouldn’t be difficult. So they don’t see what Google is doing as that unique.
Yahoo says ‘Been there, done that’ to Google redesign from News.com gets into this more.

For its part, Google has explained that it is not simply flagging video on web pages for enhancement. It stresses that it is searching against an entirely different video database to decide of the results there are of greater relevance than a web page listing. If so, the web page listing gets yanked. That is more sophisticated — yet the end results might not be that different than just inserting thumbnails for web pages that you can tell also have video.