Google said that it’s not going to release its tablet version of Android, Honeycomb, to the broader market for several months yet. This comes despite the fact that an onslaught of Android tablets using the software have been announced, some of which are now hitting the shelves (e.g., Xoom) Big mobile hardware makers and close […] 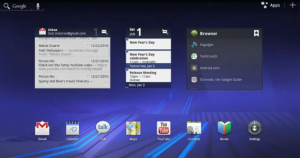 Google said that it’s not going to release its tablet version of Android, Honeycomb, to the broader market for several months yet. This comes despite the fact that an onslaught of Android tablets using the software have been announced, some of which are now hitting the shelves (e.g., Xoom)

Big mobile hardware makers and close Google partners Samsung, HTC, LG and Motorola Mobility have all developed tablets running the software but the open source community and smaller companies are not getting access yet — because it’s apparently not ready (for phones).

Not Ready for Phones

“To make our schedule to ship the tablet, we made some design tradeoffs,” says Andy Rubin, vice-president for engineering at Google and head of its Android group. “We didn’t want to think about what it would take for the same software to run on phones. It would have required a lot of additional resources and extended our schedule beyond what we thought was reasonable. So we took a shortcut.”

Rubin is saying that the software isn’t ready to go on mobile handsets, as opposed to the larger tablets. But there are some indications that Honeycomb wasn’t quite ready for tablets either. Xoom sales may be suffering as a result.

I have only seen the demos and haven’t spent any extended time with Xoom so I can’t comment from direct experience. Reviews have been generally positive. But there has also been some strong criticism of performance as buggy. One one financial analyst said that Xoom sales were “very weak” and that Honeycomb was suffering from “poor software quality” as well as limited battery life.

Legions of Android fans will obviously disagree. However Honeycomb does appear to have been rushed to market, chiefly to compete with iPad 2.

Competing with the iPad 2 — too Quickly

The Galaxy Tab 7″ device from Samsung (pre-Honeycomb) sold relatively well, though with a high return rate: 16%. After using it my view was that the smaller form factor was appealing but the user-experience was poor.

Motorola’s Xoom was the first tablet to run Honeycomb. Tablets from LG, HTC and the next generation of Samsung devices have been announced and previewed but will not be out until this summer. Indeed, Samsung got a look at the iPad 2 and made its 10″ device thinner than the one originally shown.

If in fact the new software was rushed and it’s truly not-ready-for-prime-time that will hurt this initial round of Honeycomb tablets, as they try to compete in a white-hot market. Analysts estimated that Apple sold over a million iPad 2 devices when it launched a couple weeks ago.

The iPad 2 is being released in 25 more markets around the globe this week.