Why one e-commerce company is going all-in on AMP (Hint: conversions)

With significant conversion lifts over responsive design, Event Tickets Center has been pushing the AMP envelope. Initially the domain of publishers, Google is steadily nudging commercial site owners and advertisers to embrace AMP. A new AdWords beta lets advertisers point their mobile search ads to AMP-enabled pages. Ebay was the first major non-news site to deploy AMP widely in a production setting, and other early adopters are getting on board despite the fact that there are still holes in AMP-supported capabilities. Here’s a look at how one company’s head start quickly convinced them to go all-in on AMP.

Event Tickets Center sells concert and sporting event tickets online. Three-quarters of its traffic and a majority of sales come from mobile. Several years ago, the team, headed by brothers Adam and Jesse Young, had been ahead of the curve in moving to a responsive mobile site. They quickly jumped at building out AMP landing pages last year despite the lack of support for e-commerce functionality — no support for forms, tracking and on-page elements like search.

Shortly after the team had some AMP landing pages up, they started testing it for PPC. The analytics weren’t good enough to give them solid insights, but they felt they were on to something. The company developed a kind of hack to keep users unified as they go from AMP to non-AMP pages, which gave them much better visibility into AMP performance. (Google is actively working on a fix to unify user IDs for visits to publisher domains in Analytics.)

Encouraged by the initial performance of AMP landing pages, a couple of months ago, Event Tickets Center decided to focus on building an immersive AMP experience to keep users in the AMP environment until they were deep in the funnel on the site, where AMP capabilities fell short.

They now are able to keep users in the AMP experience through navigation, search and their events pages. It’s a full AMP experience until users reach the interactive seating chart and checkout.

In A/B testing the AMP experience versus the responsive experience with AdWords traffic, the team saw a 20 to 30 percent conversion lift on AMP pages across all mobile campaigns.

By mid-May, more than 70 percent of the 100,000 ad groups in their mobile AdWords campaigns pointed only to AMP pages. That’s now at 100 percent. 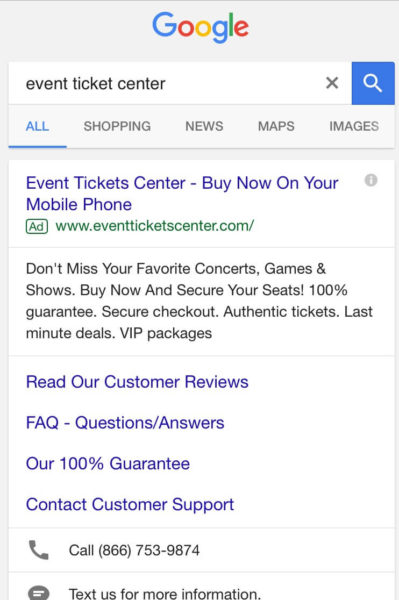 AMP pages from organic traffic are converting at a 100 percent lift over responsive, says Adam Young, and the bounce rate is 10 points lower.

The team is currently working on “AMPifying” the ticket listing and venue seating page — the site’s slowest and most complex page. They are also working on building AMP for the checkout experience, but those pages are further complicated with having to handle personally identifiable information (PII).

After their experiences over the past year, to say CEO Adam Young is bullish on AMP would be an understatement. “That AMP is a prerequisite for the future is verifiable. It’s going to be the standard delivery method. There are also no security holes that come from putting JavaScript on someone else’s site, for example.”

The team had once made a big investment in building native apps but is backing off those efforts because of Progressive Web Apps (PWAs). Young advises others considering PWAs to start with AMP and then “wrap with PWAs” (more on how PWAs and AMP can work together is available in the AMP documentation here).

“Keep it simple, stupid: this is the paradigm shift in our way of thinking,” said Young. “We’re going fully immersed in AMP. It’s difficult because everything needs to simplify.”

Young predicts it’s soon going to be very easy for e-commerce companies to implement AMP. Of Google and the AMP team, Young says, “Their focus is now e-commerce and how they’re going to make money via mobile search ads.” That should mean an acceleration of AMP support for commercial requirements.