Search Engine Land » Channel » Commerce » Baidu: The Official Google Blog You Seek Does Not Exist (& Don’t Even Try Looking For It)

Baidu: The Official Google Blog You Seek Does Not Exist (& Don’t Even Try Looking For It)

Looking for the official Google blog post about Google deciding to to leave China over censorship? Don’t try finding it on China’s leading search engine, Baidu. It doesn’t appear to exist. Google’s post was titled “A new approach to China.” A good search engine, at least the American-based ones that I’m familiar with, will generally […]

Looking for the official Google blog post about Google deciding to to leave China over censorship? Don’t try finding it on China’s leading search engine, Baidu. It doesn’t appear to exist.

Google’s post was titled “A new approach to China.” A good search engine, at least the American-based ones that I’m familiar with, will generally find the “original” source of a story when you search for it by title. So what happens on Baidu, when I look for a new approach to china? 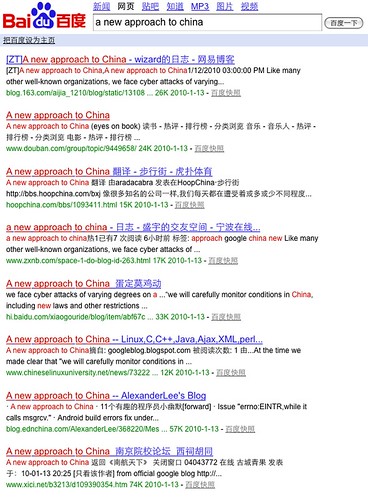 Hmm. The official post doesn’t show in the top results. Censored? As you’ll see, almost certainly. Successful? Well, no, since there are many copies that are still listed. If I click on the first link in the screenshot above, I can read what the post said — just not on the official Google Blog itself.

Is it really censored, or perhaps Baidu just doesn’t have the actual page? An easy way to discover this on an American-built search engine would be to use the site: command. When you enter a domain name after that command, you get back only pages listed from that particular domain. Does this work on command work on Baidu? To test, I searched for site:google.com, as shown below: 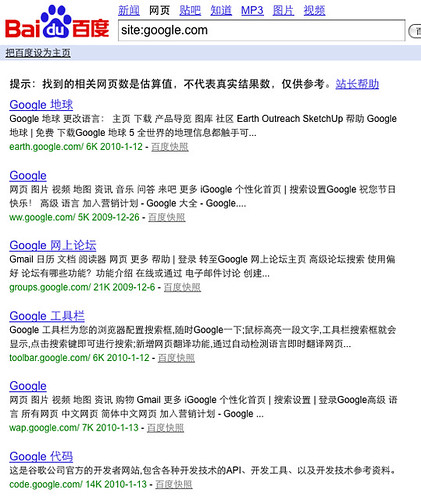 The screenshot shows that the site: command DOES work, since we’re now getting only pages that are part of the overall google.com domain. So next, how about a restriction to just the domain that has the official Google Blog. I searched for site:googleblog.blogspot.com and got this: 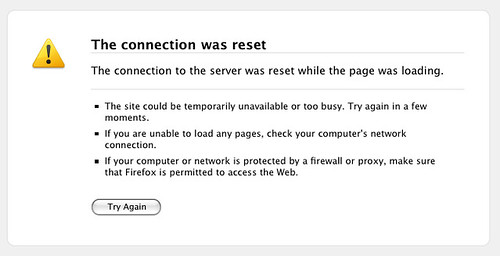 Ouch! What’s happening is something I’ve long read about. The Chinese firewall will block someone from getting results at all in some cases, if they try searching for some verboten topic. In this case, trying to find all the pages from the Google Blog has locked me out of Baidu. After a few minutes, I’ll be able to search again.

The same thing happens if I qualify the search like this:

site:googleblog.blogspot.com a new approach to china

That search effectively says, “Look at the Google Blog and show me any page that has the words ‘a new approach to china” on them.” Do that, and you get locked out.

Interestingly, site:blogspot.com does NOT get blocked on Baidu. So it’s not all of Blogger pages that trigger a lockout (blogspot.com is the domain used for many Google Blogger hosted pages). It’s just anyone trying to narrow a search directly to the Google Blog itself that gets block.

By the way, this is what you get for a new approach in china at Google China: 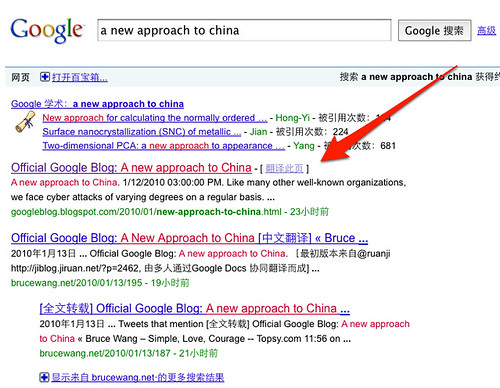 There’s the official post, right at the top. Why didn’t Google censor it out? It could be that the Chinese authorities haven’t yet told Google to do so (Google is still obeying censorship rules despite yesterday’s post. That post simply said that in the coming weeks, it will stop doing this.

Caveat time. I’m using Baidu.cn rather than Baidu.com, as I assume that’s the main site used by those in China. But I found the same thing tended to happen on Baidu.com. I’m also not actually in China nor using a Chinese proxy, so the result and things happening might be different in both the cases of Baidu and Google.

Postscript by Barry Schwartz: I made this short video documenting the steps to trigger some of this activity:

I personally spotted this from Tamar who sent me a link to this Slashdot comment.