Bing A Google-Killer? Get Real

Yes, this is another article about Bing. But I’m going to take a different spin. Instead of doing another expert review of the quality of the results and the cool interface like all the other search geeks (I use the term with affection), I want to review Bing the way that normal people will. So […]

Yes, this is another article about Bing. But I’m going to take a different spin. Instead of doing another expert review of the quality of the results and the cool interface like all the other search geeks (I use the term with affection), I want to review Bing the way that normal people will. So I’m going to take off my search expert hat and approach Bing from the perspective of the average user, who has very different concerns and motivations than the average search expert—starting with the fact that they don’t give much conscious thought to them at all. Because let’s face it: while every search geek in the world has been checking Bing out this week, our moms don’t even know it exists yet.

Most people’s first exposure to Bing was the news headlines generated by the initial buzz last week. Apparently there were over 1500 stories written about Bing the day after Microsoft’s announcement. Every major newspaper and news site had at least one headline that said something like “Microsoft ads say search is sick, Bing is the cure” or something similar. While most people probably didn’t read the articles, the buzz was loud enough that a healthy chunk of the population was at least dimly aware that Microsoft had launched a new search engine.

OK, I thought it was a joke at first. I’d be willing to bet a number of others did too. Apparently Microsoft saw that coming, so they put out a bulletin to their employees to let them know it wasn’t. Good call on that. Arguably they would’ve been better off choosing a name that didn’t make people wonder if it was a joke, but I’ll let that go for now. In fairness, Google sounded stupid out of the gate, too.

What Bing makes me think of:

Now I understand there are few un-trademarked monosyllabic four-letter words available that aren’t swear words in any major languages (bong, dong and tang were ruled out for obvious reasons), but still. Bing? I’m not sure a word that is easily confused for other words (what? ding?) and has multiple connotations is the best way to go. Even if you are going to spend $80M-$100M “branding” it.

But I digress. Let’s say the buzz caused someone to want to find out what all the hubbub was about. What would the average person do in this circumstance? We can all joke about this, but the reality is that a huge number of people will go to Google and query “Bing” to find out more about the new search engine. Don’t believe me?

The results people get when searching for Bing look like this: 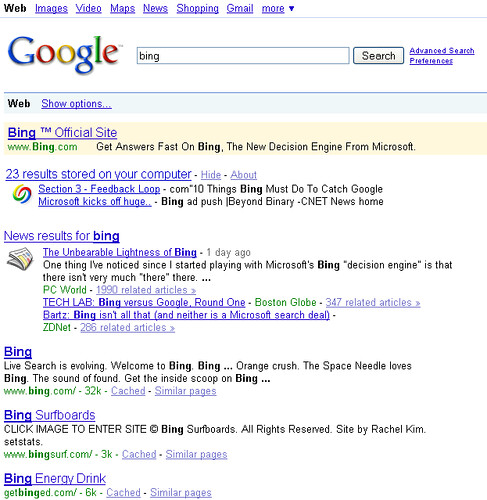 Note the Bing ad at the top. That was a pretty smart move on Microsoft’s part. I’m not sure the “Decision Engine” and “Search Overload” messaging is all that effective but, importantly, it’s consistent with their TV ad. As such, I have to give them credit for buying their brand name.

Also note the news results—starting off with PC World’s unflattering “The Unbearable Lightness of Bing” which the reviewer begins with “One thing I’ve noticed since I started playing with Microsoft’s Bing “decision engine” is that there isn’t very much “there” there.” Not the best PR for Microsoft, and an odd result in my view given the largely positive reviews that have come out thus far. I’m not suggesting that Google is tweaking the results as part of their broader attempt to dismiss Bing as a non-event. But it does seem strange. At least Bing holds the top organic listing as well—so people are going to find their way to Bing.

No description tag on bing.com

While I promised not to get all search geeky, I can’t pass up the opportunity to call Microsoft out for not populating the description tag for the home page of their own search engine, leaving it up to Google to create a completely nonsensical snippet like this:

I think I can approximate the average user’s response to this listing this way: “Wtf? Is that Microsoft’s new search engine I’ve been hearing about or not?”

Populating that description tag with something more intuitive would go a long way toward reducing that confusion. That’s a pretty glaring oversight for a search engine.

The plain truth is that most people’s first exposure to Bing will come via the massive advertising blitz that has just begun, starting with this ad:

In summary… search is broken, people are suffering from search overload and Microsoft’s decision engine is the answer. Also, it’s pretty clear this whole financial mess could’ve been avoided if you all hadn’t been screwing around on Google.

I’m not going to engage in a point-by-point breakdown of the ad itself. I’ll leave that to others. But I will observe that Microsoft’s approach isn’t likely to resonate with the gross majority of people who are at least satisfied, if not happy, with the state of search today. As Barry Schwarz notes here, all of the major search engines have satisfaction ratings of 69 or higher (led by Google with a score of 86). The idea that search is broken and that people are suffering from search overload seems to be wishful thinking on Microsoft’s part. That doesn’t mean there isn’t room for improvement or innovation. I believe there is. And Bing may be an improvement. But people aren’t going to try it until they have a compelling reason to do so. Trying to dupe people into believing the search experience is somehow broken is at odds with people’s actual experience, and is therefore doomed to fail in my view.

Granted this is just one ad, and the first of many to come. Microsoft may have a more compelling message in future ads. But the tone-deaf approach to this first one hints to me that they’re continuing their top-down “the truth is what we say it is, inconvenient facts be damned” approach they’ve taken with their other advertising efforts. Like suggesting the only reason people buy Macs over cheaper PC’s is because they look cooler. Right… (full disclosure: I’m a full-time PC user, although I dream about going Mac someday.)

Say you make it to www.bing.com and want to give it a go. If you don’t have SilverLight installed (as we didn’t on our conference room PC), you’ll likely be prompted to install it before you get too far. And you better, because without it many features on Bing simply don’t work. We didn’t realize this at first and rolled our eyes (must they always tie their products together like this?) when prompted to install it before hitting ignore and moving on. Unfortunately, we couldn’t do much without it—at least with the travel functionality we’d been trying to test out. As with the ad above, this decision seems shortsighted. Why require SilverLight to run interactions that can easily be programmed with basic HTML (dropdowns wouldn’t work without SilverLight) or JavaScript (same for rollover animations)?

I think Microsoft may be on to something with Bing, but the decision to battle Google on their own turf seems questionable to me. Gord Hotchkiss has made a compelling case that Google is a habit that will be hard for anyone to break. Even if Bing ends up being a “better” search engine than Google, the availability of an incrementally better Search Engine isn’t going to cause a massive shift in consumer behavior patterns.

Trying to claim that search is somehow broken when most users are quite happy with it is also a non-starter. It’s just not going to resonate—especially once the ad campaign ends. They could still take a different angle and attempt to change the game on Google by claiming that Bing does something useful that Google can’t. But the likelihood that Microsoft will be nimble and self-aware enough to move away from their full frontal assault on Google seems minimal. They’ve been itching for this fight for years, and now they have it.

They may win the battle, but their myopic focus on Google seems destined to lose them the war for the hearts and minds of the people who really matter. Our moms could care less.