Search Engine Land » Platforms » Apple » Could You Turn A Windows 8 Smartphone Into A Windows 8 Computer?

One of the most interesting things out of Microsoft’s demo of Windows 8 yesterday that future tablets could easily be turned into fully functional Windows computers, since the OS is the same. But how about Windows 8 phones? Could you do that too? Would you interpret a smile from Windows president Steven Sinofsky to be […] 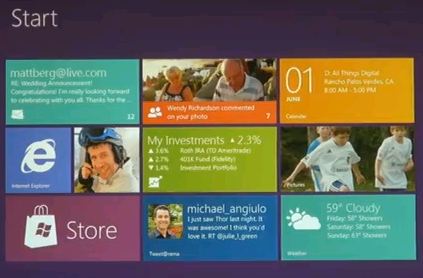 One of the most interesting things out of Microsoft’s demo of Windows 8 yesterday that future tablets could easily be turned into fully functional Windows computers, since the OS is the same. But how about Windows 8 phones? Could you do that too? Would you interpret a smile from Windows president Steven Sinofsky to be a yes?

Sinofsky, along with corporate vice president Julie Larson-Green, opened the Windows 8 kimono at the D9 Conference yesterday. You’ll find plenty of coverage over at Techmeme about the news. Perhaps most interesting was the idea that Windows 8 would work on tablets and laptops alike.

Even tabtops run Windows 8! What are those? I made the name up, but the hardware is real and was shown, laptops with touchscreens. Want to use touch to control something? Reach out and interact through your laptop screen. Or use your keyboard and mouse. Both work.

As the Microsoft press release puts it:

A Windows 8-based PC is really a new kind of device, one that scales from touch-only small screens through to large screens, with or without a keyboard and mouse.

Well, a phone is a small screen touch device. Will Windows 8 run on that? If so, that might be huge.

Consider that Apple, Google and Microsoft all have the “dual OS problem,” where each supports both a mobile OS and a desktop OS:

While “Windows Phone 7” might sound like Windows 7, it’s really a completely different operating system. You’re not going to run a Windows 7 application on a Windows Phone 7 device, any more than you’ll run an iOS app from your iPhone on your MacBook.

Is It A Problem?

I called this the “dual OS problem” even though I really don’t know if it’s that big of an issue, in reality. Google especially gets hammered over the “why are you doing both Android and ChromeOS” even though I rarely see this as an issue raised for Apple (though since I don’t watch Apple closely, maybe it also comes up, and I’ve missed it).

There has been some anticipation that I’ve read in the past about MacOS and iOS merging. But that’s doesn’t seem likely to be announced at next week’s Apple Worldwide Developers Conference. Mac OS “Lion” and iOS 5 are still listed as separate products. Maybe we’ll get a surprise.

Google certainly hasn’t said to expect a ChromeOS and Android OS merger any time soon. Indeed, Android itself has split into Android 2.0 for phones and Android 3.0, which is pretty much exclusively for tablets. The company said at its recent Google I/O conference that the split will be maintained until Android 4 is out, which will again be for both devices.

As I said, are these splits between desktop and mobile operating systems that much of a problem? They certainly haven’t slowed either Apple or Google down. Plus, with more apps and data being cloud based, the browser itself continues to morph into the ultimate universal operating system.

Still, having an actual phone that doubles as a real computer would be pretty interesting. Imagine it having an HDMI output to a display and a USB input for a keyboard, mouse and other devices. Plug it in, and you’ve got a “real” computer.

It’s kind of intriguing. Indeed, it’s already here in the form of the Android-powered Motorola Atrix, which can dock into a laptop shell, turning it into a computer. Except, not really — you’re not going to run your normal “laptop” style apps that way.

But a real Windows 8 phone that might have a laptop-docking feature? There’s your all-in-one device. Grab your “laptop” from your desk, and you’re ready for that business trip as usual. But pull your phone out of the laptop after the meetings, and you’ve still got everything — cloud data, cloud apps, local data, local apps — should you need it.

It’s possible, but will it happen? I caught Sinofsky after his D9 talk and asked — would Windows 8, the full-blown operating system, be running on future phones?

Sinofsky smiled, and smiled big, but he only said that’s not something Microsoft has announced yet. So, we wait to see.

What if it happens? Getting to that unification “first” doesn’t necessarily mean that Microsoft somehow “wins” in doing so. For one, would it really run that well on phone-sized devices? That remains to be seen.

For another, it also means that Windows 7 Phone users would be upgrade-orphaned. The apps they have for that platform probably wouldn’t run on Windows 8 devices.