This year, Facebook launched a new semantic protocol called the Open Graph, including provisions for local businesses and places. Meanwhile, Google has expanded support for other standards, including RDFa, Microformats and Microdata. As a local SEO, the question is: focus on Google or expand your efforts to embrace Facebook’s Open Graph? The answer—unequivocally—is expand your […]

This year, Facebook launched a new semantic protocol called the Open Graph, including provisions for local businesses and places. Meanwhile, Google has expanded support for other standards, including RDFa, Microformats and Microdata. As a local SEO, the question is: focus on Google or expand your efforts to embrace Facebook’s Open Graph? The answer—unequivocally—is expand your focus, and here’s why.

On the face of it (if you’ll pardon the expression), we don’t really seem to need Facebook’s Open Graph—we don’t need yet another semantic protocol for location information. The description that it “…enables any web page to become a rich object in a social graph” smacks a bit of propagandistic fervor.

Declaring and deploying a whole new protocol without some community involvement seems sort of megalomaniacal and controlling here in 2010—prompting CNET’s Caroline McCarthy to headline her article about the protocol’s announcement “Facebook F8: One graph to rule them all”—a reference to Tolkien’s Lord of the Rings wherein the forces of evil sought to obtain a magic ring that would give them omnipotence over the land. The prophetic poem in that story contained these verses: “…One Ring to rule them all, One Ring to find them, One Ring to bring them all and in the darkness bind them….”

TechCrunch’s MG Siegler further reported how others have taken exception to the protocol’s “open” designation and criticized the lack of community collaboration in its development.

The whole thing is uncomfortably reminiscent of how the old Microsoft-specific browser stuff has plagued developers on the internet over the years. Of course, it’s not unusual for companies to generate protocols in allowing developers to integrate with their platforms, but it’s slightly disappointing that Facebook wasn’t a bit broader in also adopting semantic locational markup that others are already using, and collaborating more with organizations such as the W3C.

Some aspects of Open Graph format are troubling to me—such as the dependence upon use of metadata instead of simply marking up data already visible to users with machine-readable labels. This seems duplicative, verbose and old-fashioned to me, and I can’t help but wonder if Facebook may discover what the search engines found years ago—depending more heavily on hidden metadata can open you right up to spam exploits.

Aside from the “religious” arguments about the pros and cons of various semantic markup formats, and aside from the inconvenience of having to incorporate yet more code to mark up one’s local information, there are compelling reasons to do so for local search engine optimization experts.

Second, you can optimize with Open Graph while continuing to use Microformats, so you can optimize for Google and Facebook simultaneously. In fact, Google states in Webmaster Central that it recognizes Facebook Share coding for videos, so I’d conjecture Google might expand to recognize Open Graph if it sees a significant number of people using it.

Finally, if you have large sites already incorporating one of the other semantic protocols, it probably isn’t difficult to incorporate Open Graph into your templates by reusing the same data fields to populate these new tags.

Once the data on your page is marked-up, I believe it’s easier for Facebook to absorb it. Thus far, I believe this Open Graph data would only get absorbed into Facebook’s own native search engine and not into Bing’s, although it would make a whole lot of sense for Bing to develop the ability to absorb this data as well, considering their close partnership with Facebook for search functionality.

Some sites have already incorporated Open Graph, and these might be useful to look at as examples. Predictably, Yelp has done so, as well as Gowalla and the Internet Movie Database. Here’s how Yelp’s page for Tillman’s Roadhouse restaurant in Dallas appears in Facebook’s search results: 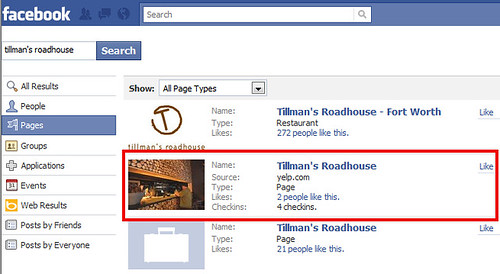 You can see that this integration not only allows Yelp’s page to appear in the Facebook page search results, but it’s allowing the page to accrue “likes” and “checkins” and it displays Yelp’s picture as a thumbnail. It’s not immediately apparent why it’s showing a type of “page” instead of “restaurant,” since restaurant is one of the few business types that Facebook has defined in Open Graph so far. Perhaps that’s a malfunction on Facebook’s part.

You can now see the data passed via semantic markup in Facebook. Their data now displays a thumbnail of my picture along with the name, the “landmark” type label, my site’s name “silvery,” and how many people have liked it: 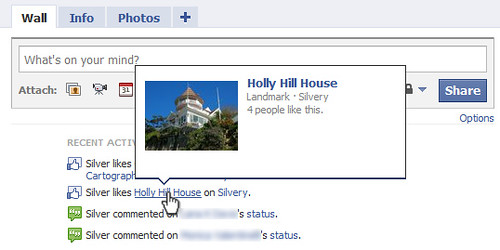 You can also use og:it as a validator to check your Open Graph coding—here’s their parsed info from my Holly Hill example page.

One irritating aspect of Open Graph is that the taxonomy is so very small. They only provide labels for five types of businesses so far: bars, cafes, hotels, restaurants and the generic “company.” The taxonomy really should be broadened to at least include more common yellow pages style categories such as the designations found in NAICS. Under Open Graph you could declare your own type, but there’d be no guarantee that Facebook would accept and display it.

Another irritating aspect is how Facebook doesn’t appear to be converging the data from all these sources. A business might already have its own fan page, it could have a separate website page, it’s own community page, and a Facebook Places page. Now there are all these checkin service and directories which may have separate pages as well. Shouldn’t check-ins occur on the business’s Facebook Places page? This is all confusing to consumers as well, and I see instances where people are purposefully “hijacking” business’s identities via Facebook.

Hopefully, Facebook may resolve some of these issues as more and more businesses and websites choose to integrate.

Will this sort of integration provide SEO benefit outside of Facebook’s search silo? It might down the road, considering that all sorts of Facebook activities could be used as rich sources of quantifiable popularity measures by search engines. Google obviously wants access to this data for all sorts of reasons, and they’ve hinted they intend to access the usage data “by hook or by crook“, as some have put it. As their rhetoric demanding that Facebook open up its data for their use heats up, it makes it clearer that they want to take activities such as “likes” and checkins for use as possible ranking signals.

For now, Facebook’s Open Graph may provide some worthwhile advantages, particularly for sites with large quantities of content who wish to gain greater exposure in the social media service. The protocol is unobtrusive enough to add to a site with minimal developmental impact, and the potential for greater distribution makes it worthwhile.

Props to Mike Blumenthal for rattling my cage regarding Open Graph!