It appears that Gmail is now supporting the IMAP protocol as of today. Download Squad was one of the first to report the new functionality found under the Gmail settings section. There is now a ton of coverage on the new Gmail feature. On the Gmail What’s New page, we have confirmation that IMAP is an official new feature (Google has also now blogged about it).

Here is a screen capture of the IMAP feature in Gmail: 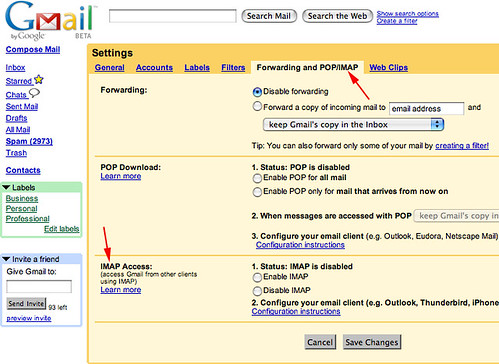 IMAP, in my opinion, totally is superior to the POP protocol. It enables you to use multiple devices to check your email, and changes made on one device show up immediately on the other device.

On the supported clients.

How does everything sync up? Gmail has documentation on that as well.

Postscript: And now the Gmail blog has a post on the new feature.