It’s not unusual for other search engines like Yahoo, Bing or Ask to advertise on Google. But I’ve never seen Google run an ad on another search engine until now. I did a search this evening on Bing for Google Chrome. To my surprise, there was an ad right at the top of the page […]

I did a search this evening on Bing for Google Chrome. To my surprise, there was an ad right at the top of the page advertising Chrome, apparently from Google: 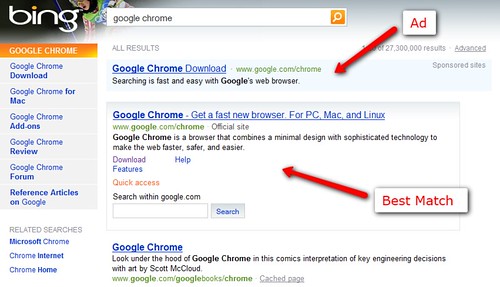 What’s that big box below the ad? That’s Bing doing a special “Best Match” unit. It’s completely editorial and not connected with the ad. But above it is definitely an ad — that’s why it says Sponsored Listing.

I also see the ads if I search for just chrome or browser: 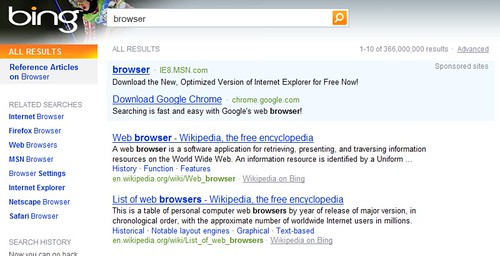 And at Yahoo, I’ve spotted an ad appearing for google chrome, though it’s for Google’s personalized home page, not for Chrome:

There’s a chance someone else might be running these ad, of course. But I don’t know of any Google Chrome affiliate programs out there, which means there’s little incentive for anyone else but Google to be doing this. But I’m checking with Google and will update, if it really isn’t from them.

Postscript: Google confirms that they are indeed placing these ads, that they’re always looking for ways to promote their products. Google also said they’ve run search-targeted ads on other search engines before this. As for Chrome, they’ve done ads in other places such on Hulu, for example.

Below, some examples of Bing advertising on Google, for bing and search engines: 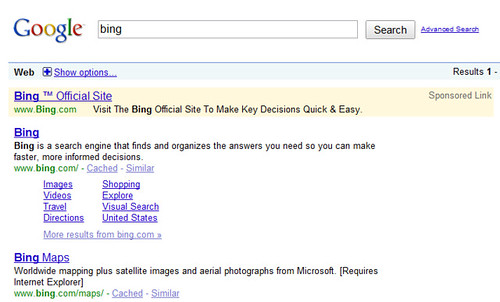