First Google digitized books, then newspapers, then historic Time-Life photos and now — magazines. Today through Google Book Search, people can search the full-text of millions of articles from more than 10 magazine with hundreds more to come, the company has announced. Eventually, content from the magazines will be available to those doing Google News […]

First Google digitized books, then newspapers, then historic Time-Life photos and now — magazines. Today through Google Book Search, people can search the full-text of millions of articles from more than 10 magazine with hundreds more to come, the company has announced.

Eventually, content from the magazines will be available to those doing Google News Archive searches or show up in “regular” Google searches via Universal Search. For now, however, the content lives only within Google Book Search.

How do you access the magazines? Ideally, Google wants you to find them in response to a search for anything at Google Book Search. For example, a search for hank aaron catching babe ruth should bring up a listing tagged as “Magazine” that leads to a 1973 Ebony magazine article about Aaron nearing Ruth’s home run record (note, search functionality doesn’t seem to be live yet but should be enabled shortly).

Click through to the article, and you can see a scan of how the article actually appeared in the magazine, complete with photos, and with your search terms highlighted in the original text: 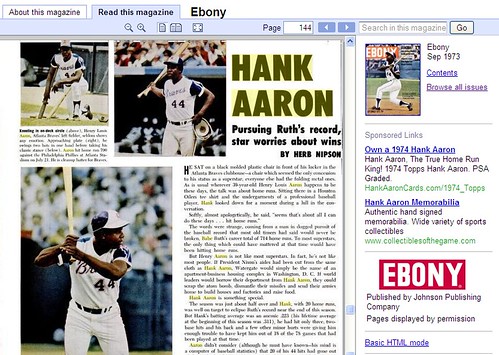 Want to browse through a particular magazine? Unfortunately, there’s no way to see the complete collection of magazines indexed. These include among others:

Hundreds more magazines will be added in the coming months from dozens of publishers, Google said. Unfortunately, no browsable guide to all the magazines indexed is planned. I think that would be useful. But Google said that if this turns out to be a popular request, it might come.

So how do you find only magazine content if you want it? Use the advanced book search page to use a new option to narrow searches just to magazines.

Once you’ve found a magazine article, you can then click on the “Browse all issues” link to the right of the article to get to a home page for the magazine itself:

From there, you can search just within the magazine or click to see all issues listed by year: 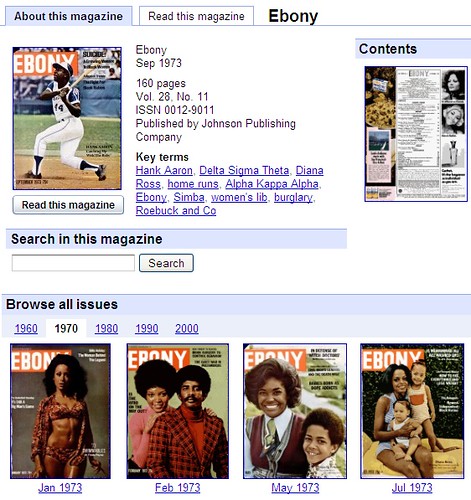 Each edition also has a contents page, sometimes where you can jump to particular articles using HTML links, like this:

In some cases, the contents page is the magazine’s scanned table of contents, where text has been turned into clickable links: 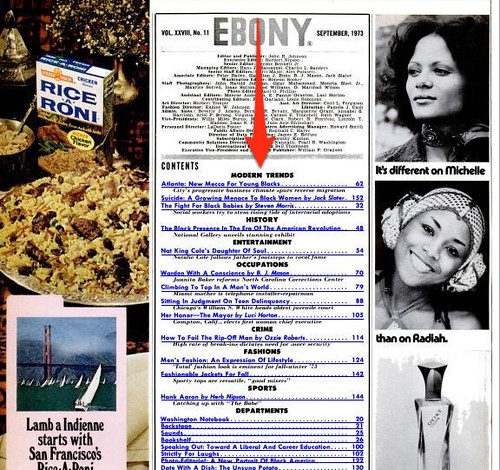 Google’s highlighting a few gems from the magazine archives such as this article from New York Magazine that gave birth to the term “Brat Pack,” shown below in the two-page view (use the two-page icon above any article to get that view): 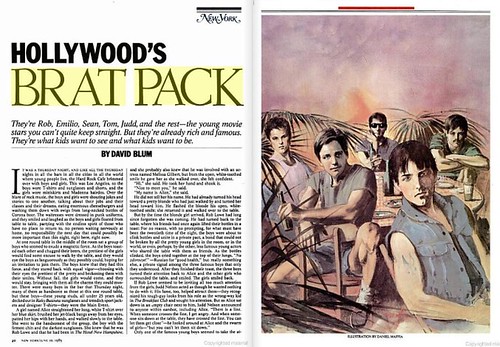 I liked this example Google showed me from Jet, about a Gallup poll that was done showing how in 1969 showing that 67% of Americans said they’d vote for a Black presidential candidate, up from 38% when a similar poll was done in 1958:

Nice to see the change from a “would they” survey back in 1969 to a “they did” reality in 2008 with the election of Barack Obama.

How about monetization? Magazine articles have ads appearing next to them, as with regular Google Book Search. Magazine publishers share in the revenues generated by these ads. They can also opt-out of having ads shown, if they want. Google said some publishers are also excited about being included as a way of expanding their brand.

In addition, Google plans to allow publishers to have a version of magazine search that can appear for their own publications, on their own web sites.