Google Has Over 75% Of US Search Ad Market

New figures out on search advertising spend from Efficient Frontier show Google continues to dominate the market, stats that will no doubt complicate the company’s goal to gain approval of its deal with Yahoo on search ads. However, it is interesting how in Japan, it’s a much more 50/50 market split with Yahoo, showing that […]


New figures out on search advertising spend from
Efficient Frontier show Google continues
to dominate the market, stats that will no doubt complicate the company’s
goal to gain approval of
its deal with Yahoo
on search ads. However, it is interesting how in Japan, it’s a much more
50/50 market split with Yahoo, showing that Google does have weaknesses.

For the second quarter of 2008, Google had 77.4% of the search
advertising spend according to data tracked by Efficient Frontier, which
manages ad campaigns for a wide variety of large advertisers. The data
covers 23 billion ad impressions and 390 million clicks. Google’s share
includes a small percentage of contextual ad spend (which is not search), as
does Yahoo’s. You can see these broken out in the share chart below for Q2
2008: 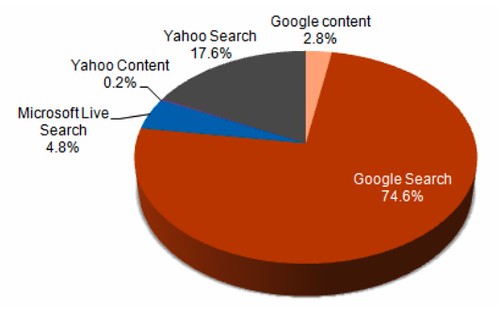 Over the past year, Google has continued to gain share of ad spend
pulling away primarily from Yahoo (Note: I don’t have figures for Q3 2007 at
the moment, so I’ll update later when they come in): 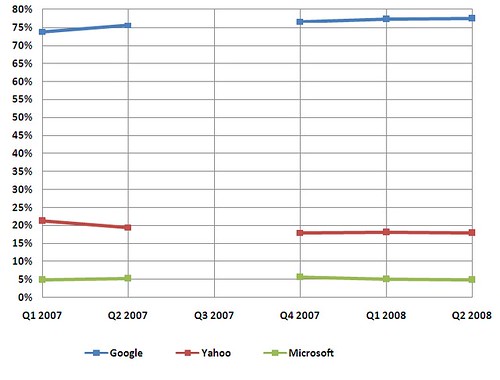 That drop is bad for Yahoo, since its
Panama ad system,
launched last year, was supposed to
help increase the amount advertisers were spending with the company. Of
course, the company has also had
declining search share overall, so
fewer
impressions can also mean potentially less spending with Yahoo.

Keep in mind that Yahoo could have a declining share of the search spending pie
yet still earning more money as long as the overall spend on search advertising
is growing. And it is, says Efficient Frontier — but not to Yahoo or
Microsoft’s benefit.

Instead, Google is getting more of the new money coming
in than the others. Officially, Efficient says Google gets $1.10 of every
new dollar spent on search. That’s complicated to understand, even after I
talked with them about it. So stick with the bigger point — the others are
seeing both declining share of overall search spend and a declining amount
of actual earnings.

This is great for Google with the exception that the
company is currently
trying to win US government support for a plan to have Yahoo carry some of
its search ads. The latest numbers hold no particular surprise about how
dominant Google is, but they’re fresh evidence that you’ll no doubt hear
Microsoft parroting in terms of why a Google-Yahoo deal would be bad for
competition.

Another stat that might get trotted out is the cost-per-click figure.
Google’s cost per click is well above the others, about $0.70 on average,
with Microsoft around $0.60 and Yahoo around $0.50. Google’s CPC rate has
actually dropped the past two quarters (as has Yahoo’s), but no doubt it
will be argued (as it already has been) that a Google-Yahoo deal
will just allow Google to "set" the market and make CPC rates go higher
(officially,

Google says the market sets prices).
Here’s the chart (note that spend by financial services advertisers is not
included in it): 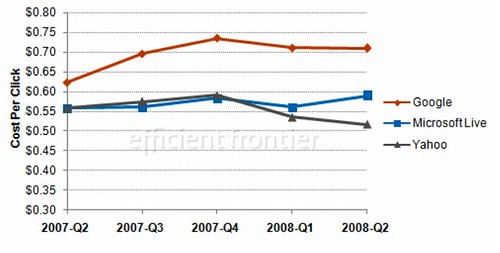 Good news from Microsoft — for two quarters in a row, it has claimed the
title of best ROI. The problem, of course, is that while advertisers might
get better ROI, there’s a lot less search traffic for them at Microsoft to
get it from: 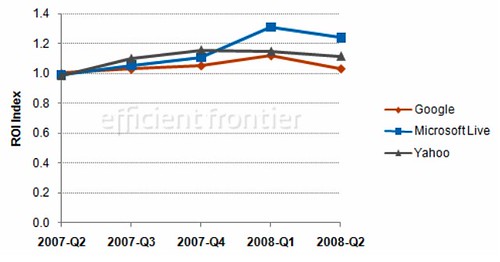 Back to the competition aspect: just because Google’s dominant in the US
doesn’t mean it plays that way out in all countries. In particular, Google
is behind in China, South Korea, Russia and Japan. Efficient has spend
figures for the latter, which show Google has just barely 50% of the Japanese market.
The other half belongs to Yahoo: 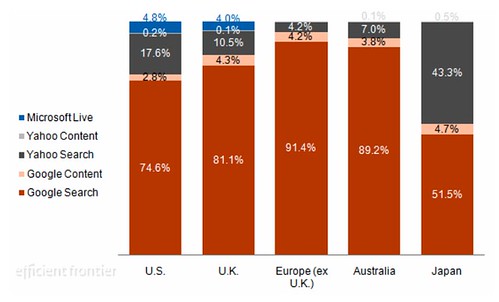 Note that in Europe (excluding the UK), Google has over a 90 percent
share. Fortunately for Google, the Yahoo ad deal is US-only, so it won’t
have to face European regulators who likely would take a hard look.

Finally, many who worry that search spend will decline because
of current economic woes should feel reassured that, on the whole, Efficient
says spend is increasing. But some sectors are feeling the impact: 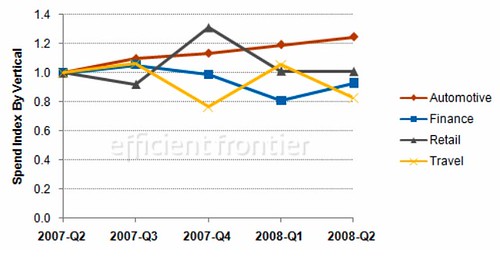