What sites send Bing the most traffic? Here’s a surprise. According to Hitwise, Google is Bing’s fourth largest referring source. Below are the top five sites that drive traffic to Bing, or “upstream” to Bing, as Hitwise calls it: MSN is by far the top source, the last site visited by 42.7% of Bing users […]

What sites send Bing the most traffic? Here’s a surprise. According to Hitwise, Google is Bing’s fourth largest referring source.

Below are the top five sites that drive traffic to Bing, or “upstream” to Bing, as Hitwise calls it:

MSN is by far the top source, the last site visited by 42.7% of Bing users before they went to Bing. That’s not surprising. MSN — Microsoft’s portal — has long been a huge search driver for Microsoft. In fact, the company recently said that half of all Bing queries come from MSN.

Bing is also the default web search engine for Facebook, so Facebook makes sense as the number two referrer, at 4.6% of traffic.

Windows Live Mail — that’s another Microsoft property that ties into Bing search — so it’s another one that makes sense logically. It’s at 4.4% of traffic.

But Google as the fourth largest referring source, at 4.1%? Google, which competes against Bing? How’s that happening? Probably two ways.

You can find Bing ads showing up on searches at Google for bing, cashback, search engines, flight comparison and image search, to name some examples. Interestingly, Bing doesn’t appear to be buying ads against its tagline, that it is a decision engine.

Bing also does a lot of TV advertising. TV ads are known to drive search queries. So there’s a good chance that when someone sees a Bing ad, they decide to google Bing and discover what they’ve just seen!

All this also applies to Yahoo, which drives 1.9% of traffic. Bing advertises there, and TV ads probably generate queries on Yahoo for Bing, as well.

It’s clear people do search for Bing by name on Google. Using Google Trends, we can see the growth of this over the last year. Here’s the search volume of those seeking Bing on Google: 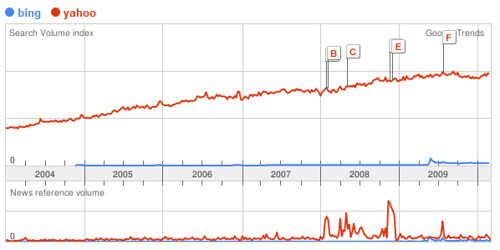 Oddest of all, currently more people search on Google for Google than for Yahoo or Bing. Here’s the chart: