Google Opens Up Downloads To Iran But Blocks Iranian Government 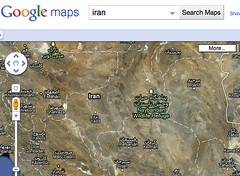 Google announced that after years of not allowing those in Iran to download their software, Google has opened up downloads of their Google Earth, Picasa and Chrome applications.

Now if you are in Iran you will be able to download Google Earth, Picasa and Chrome to your computer.

Google explained that the U.S. export controls and sanctions programs prohibited software downloads to Iran. But Google said some of the “export restrictions have now been lifted” and they can now enable some Iranians to download these applications. For now, Google is just opening up those three products and might open up others for download in Iran.

Google did make a point to say they “will continue to block IP addresses associated with the Iranian government.” Of course many Iranian officials will get around that, if they want.

The LA Times reports that Google is still restricting access to their other products in Iran, including AdSense, AdWords and Google Checkout. In addition, Google restricts all downloads in Cuba, North Korea, Sudan and Syria.

More details and coverage can be found on Techmeme.