Today at Searchology, Google has launched a search results enhancement called “rich snippets” that uses meta data from web pages (from microformats such as hCard, hCalendar, and RDF) to display additional details (both content and meaning) about pages in the results. This initial launch supports reviews (with sites such as Yelp) and people (with sites […]

Today at Searchology, Google has launched a search results enhancement called “rich snippets” that uses meta data from web pages (from microformats such as hCard, hCalendar, and RDF) to display additional details (both content and meaning) about pages in the results. This initial launch supports reviews (with sites such as Yelp) and people (with sites such as LinkedIn). They will be adding more sites and categories over time.

Reviews include the average star rating and and number of reviews for things like restaurants and products. 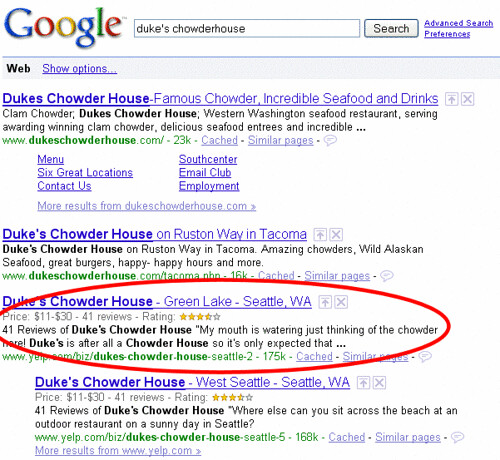 Google is also showcasing reviews in other ways. They’re using sentiment analysis to pull review information from pages and display that as the description below a result (even in cases where rich snippets aren’t used). This comes into play particularly with the new search options feature. You can choose to see only reviews and those descriptions based on Google’s new sentiment analysis are notated by quotes. This feature works better for some searches than others. For this search on [smx advanced], for instance, when you choose the reviews option, the fourth result is the first one that pulls a review into a snippet: 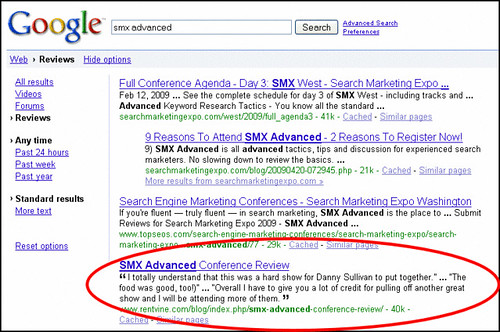 People search provides disambiguation, such as a person’s location and job title so searchers have a better sense of which result matches the person they’re looking for.

It makes sense that people search is the other topic Google has chosen to launch first, as they’ve been focusing on profiles for a while including the evolved Google Profiles and people search OneBox. In addition, Google’s internal search logs likely confirm what a PEW/Internet stuty found in late 2007: over 50% of searchers have searched for people.

Site owners have been asking for support of microformats for some time, so this should come as welcome news both for them and for searchers who will benefit from the increased set of information in the search results. Google has been testing this new results format for a while, and the reviews topic in particular has been in action for a while in Google Local [although when I talked to a search engineer after the event, he said that the technology behind revies inlocal results and rich snippets is different, although the UI looks similiar. He agreed that it may make sense in the future to find some way to integrate the two, but that’s not being done at this point.

On first glance, Google’s rich snippets appear very similar to Yahoo’s SearchMonkey. However, there are some differences, the key one being that site owners don’t have to do anything other than make the metadata available. With SearchMonkey, on the other hand, enhanced listings are based on SearchMonkey applications that outside developers build. This coincides with Google’s overall aim to algorithmically determine relevance, with little manual input from content owners required. While many site owners want to be able to provide more input, Google is dealing with the scale of the entire web and wants to build features in such a way that all content can be included, even if the content owner doesn’t know anything about Google.

The other announcements at Searchology, such as Google Squared, illustrate Google’s intent to algorithmically structure the web with little outside input.

This announcement may help SearchMonkey adoption, however, as Yahoo is encouraging use of these formats. And while Yahoo may not have enough market share to compel past the tipping point, Google may be able to spur adoption.

When SearchMonkey launched, site owners were worried that the enhanced display would show so much information in the results, searchers would have no reason to click over to the page. However, Yahoo provided data that showed that listings that were enhanced had up to 15% increased click-through rates. I asked Google if site owners could opt out of the program, and Kavi Goel, product manager for the product, told me that Google only extracts the data if the site owner makes the metadata available. Of course, site owners may have other reasons for marking up their pages with microformats, so Google may still have an issue with site owners worried that too much of their information is displaying in the results.

So, how does it work? Our previous article dives into the details of how Google is pulling metadata from web pages to display these rich snippets. Google doesn’t guarantee that the presence of this metadata will result in rich snippets, but you can request consideration via a form. (If Google finds this metadata during regular crawls, it may use it in rich snippets; the form isn’t a prerequisite, but may get the content looked at more quickly.)

Neither Google nor Yahoo have said that they’re using microformats for indexing or ranking, although both have hinted that perhaps this is something that they would do over time if the results prove useful. When I talked to search engine engineers later, they confirmed that microformats are not being used for indexing or relevancy at this point, but only in the composition of rich snippets.

Postscript by Barry Schwartz: Here are official Google blog posts on this topic :