Have you ever read those blogs and websites which start with the words, “74% Of The World’s Consumers Don’t Speak English,” or “54% Of The Connected World Is Outside The US?” They’re usually the first post of someone who has just discovered “global” and has been shocked by the numbers. International Business Is Becoming The […]

Have you ever read those blogs and websites which start with the words, “74% Of The World’s Consumers Don’t Speak English,” or “54% Of The Connected World Is Outside The US?” They’re usually the first post of someone who has just discovered “global” and has been shocked by the numbers.

International Business Is Becoming The Norm

I’m not going to do the shocking numbers bit this time, but what I am going to say is that the Web is so significant to business development in the modern age, that the businesses which are going to do well will all be international! In fact, international will be the new default position for businesses, and dealing with multiple languages, the norm.

First Law Of Marketing: Target Customers Who Are Interested

One of the secrets of success is making the right decisions in the first place about where to target. If you think about it, this is the major cause of all business difficulties when beginning to market overseas.

Making the right decision, however, isn’t easy. As part of the courses on international SEO that I run, we cover a way of thinking about using keyword research in the process.

The first step is to create your candidate list of target regions. (A region, by the way, would be France::French or Belgium::French, both of those would be regions in our terms. You can’t safely treat the world as countries with national borders these days — it’s far more complex than that!) Creating a candidate list is sometimes determined by logistics, delivery capabilities, the legality of the product or service or other factors. But what do you do if you still have 40 to 60 potential regions to target at the end of the process? The ideal process is to undertake some local market research, perhaps in-street surveys or focus groups, but doing that 40 times over in maybe 20 plus languages would not be for the feint hearted!

Search engines to the rescue.  Fortunately, consumers reveal their purchasing inclinations through the keywords the put into the search query box of search engines — which then kindly enable us to investigate which keywords are showing up in their logs.

Now, it gets a little trickier, but you have to infer some meaning to what they’re searching for.  If you’re about to launch with a product that is already well known and established, this isn’t too difficult to do. The difficulty arises if you’re inventing something new, something which is market disruptive or something completely revolutionary. You are brave.

But, keyword research can still help you here because there will always be some related terms that will be a good indicator of likely interest in the target region. As I sit here in a snow covered Britain, let’s imagine you’re about to launch some treatment you can use with summer tires to make them more suitable to run on the snow. You’ll want to check out the level of searches for winter tires, even though that’s the market you’re planning to disrupt.

But you also know these searches are historical — they only really show what happened yesterday — so how do you predict the future?  Well, partly, that’s where trends come in. Take the image below showing a search for “winter tyres” in the UK — noting the UK spelling.

Even despite the fact that Google made a geographical tweak in 2011 which shows more data for the UK than before, the patterns show that searches for winter tires have gone up dramatically. Not surprising, when you consider that the last two UK winters have been by far the worst for snow for many years. 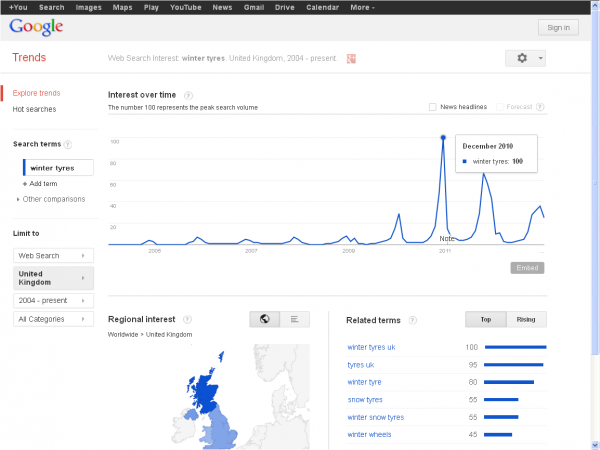 The Diffusion Of Innovation Curve

Now, the thing to remember if you’re checking out something that is truly revolutionary, is the diffusion of innovation curve — something marketers have known about for years.

Often, very successful products already had the creative pioneers and pathfinders  trying to find a solution similar to the one you are offering. This frequently means looking deeper at long-tail keywords because they show more clearly the intent of the user. So, [something that makes my tires stickier for winter] would be a good candidate for your product.

Next, all you need do is compare and contrast different markets — noting that you have to have a very good understanding of the meaning of terms in different languages — so, you can’t just match keywords one-to-one to each other. But, you can gauge which regions have the greatest interest in your solution from your candidate list of potential markets.

Then, some deeper in-market research can take place to supplement and enlarge upon your findings — but at least, you don’t need to do that in 60 countries and can start to narrow down to the targets which are really interesting!