Something’s up with Google’s Chrome operating system. Don’t know what, but we’ll all know soon as a press conference begins at 10AM Pacific. I’m coming at your live from the Googleplex. Buckle up, and we’ll see what’s happening. You can also watch from home. Webcast info is here. There will also be related coverage developing […] 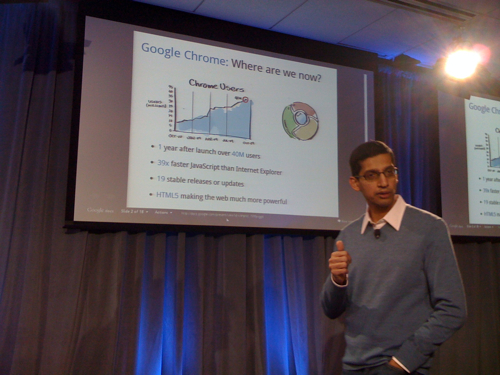 Something’s up with Google’s Chrome operating system. Don’t know what, but we’ll all know soon as a press conference begins at 10AM Pacific. I’m coming at your live from the Googleplex. Buckle up, and we’ll see what’s happening. You can also watch from home. Webcast info is here.

There will also be related coverage developing at Techmeme, including news the Chrome OS source code is now apparently live. as Google’s Matt Cutts has tweeted.

And we start. Sundar Pichai says not launching today. A year away from that but have made constant progress and will show demo of what they’ve got so far and how will go to market. But primary reason is as of today the code will be fully open. Developers internally will work on the same tree as those internally.

Where at after a year since the Chrome browser? 40 million users, 39X faster JavaScript than Internet Explorer. Most users who use Chrome send most common feedback that Chrome is fast. 19 stable releases. Lots of work on HTML 5 to push web forwad.

Chrome for Mac is close to launch. “Looking at the number of Macs in the room, I’m excited about it.” Linux will come. Nearing the point of releasing Chrome Extensions.

Talk about wanting ways to do better graphics, video/audio playback, multiprocessor use.

Hundreds of millions of uses live in the cloud.

Looking at all these trends, the question we ask ourselves, is there a better model of computing we can give our users. We think so, and that’s what Google Chrome OS is.

Focused on speed, security and simplicity. No applications. All in the browser. Easy to use. We want it to be possible for people to share machines and feel comfortable with that.

Since no applications installed on the system, they can monitor stuff — completely inside the browser security model.

And now we’re about to see a live demo. Here’s a video I shot of this portion (live blogging continues below it):

Applications run in tabs, like in a browser. you can pin a tab to make it an “application tab” so you can easily go back to it. There’s also an app menu. 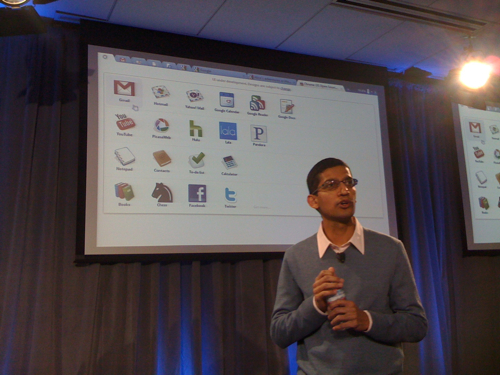 There are also panels. Light weight windows you can have all the time. Showing a chat window for Google Talk, for example. There’s a notepad panel. Where’s that data go. It sync to the cloud, shows up in Google Docs (so is the cloud in Chrome OS = Google’s own cloud?).

Now showing Google Books and how you can go in full screen mode and use this as an ereader.

It’s common for people to have multiple windows, but so far, we’ve been in one window. But you can easily move to different Chrome “instances.” IE, multiple desktops. If you have a Mac, you know of this as Spaces (which are awesome by the way.”

Shows how you can browse files. Pulls an Excel app up. Clicks on it and shows how it launches the Microsoft Excel app, stressing this means the OS isn’t locked to Google or a particular cloud.

Now taking picture with an Android phone. Now showing how you can bring it up in Chrome. Hey that’s me. Ugh! Took a picture of us in the front :)

Now Matt (and I didn’t get his last name, sorry — but it’s not Cutts) is talking Chrome under the hood. They want to be like a TV, instant on, book out of RAM and fast rather than from a hard drive. Not to load things that aren’t needed, like a bios or OS call to find non-existent floppy drives.

Security. Chrome checks on each boot, a “verified” boot, “we double check that you’re running what you should be running.” They check for the cryptographic signatures. See, big word. it’s safe. Let’s call it a digital signature.

Now let’s say the signature check fails for some reason, such as with malware or some other reason. They find it happens, do the detection, system repairs itself. System does fresh download, and restarts. It essentially reimages your computer. But without the pain. Made in a way where all your system data is saved. “You don’t lose anything in the process.”

How make sure applications don’t harm your machine? Applications on operating systems now have full control. In Chrome OS, apps are all web apps, which have different security model, where the browser takes pains to assume they’re hostile. They can’t do things to your hard drive or system. So in Chrome, the system uses “security sandboxing” and basically doesn’t trust the applications.

Every tab in Chrome OS separated from others. File system is locked down. Lots of technical stuff. But user data is constantly synced with the cloud. This has this wonderful property that if you … lose your device, you get a new one, log in, and it’s just the way you left it.

And now back to Sundar on how to go to market. Says will talk much more next year. Working on the Google Chrome OS image, the software. Don’t support hard drives. Only solid state. Only some wireless adapters (I think he said). So you want to run this on any old computer? Might not work. “You would have to go buy a Chrome OS device in the marketing … our timeframe is next year .. want to make holiday season.”

And now we get a movie explaining to us in basic terms on how Chrome OS is better. Like how if it doesn’t take 45 seconds to boot, you could make a sandwich.

It all sounds so perfect. Kind of like those Mac ads. Be cool if it “just worked” in the way the Mac is supposed to but doesn’t always.

What about when you’re on a plan and offline? You can cache material locally and play, videos, etc.

Mike Arrington  from TechCrunch asks, really, no way to run third party apps? The current plan is to support web apps, so they feel they are supporting third party apps. Arrington says that’s what Steve Jobs said about the iPhone. Sundar says it is different on larger form factors (in other words, I think, since you’re not running a cutdown browser, what happens on a “real” computer will work on a Chrome OS machine.

Business model on Chrome? Full free, fully open source. As more people use the web, it benefits Google as a company.

Question. What was demoed, can’t I do that with any browser logged into various cloud services? As a model of computing, Google thinks things are much different.

What if cloud is down? How can Google be trusted with the data?

If cloud is down, that affects people on computers now. You can’t get to email, for example. As for trust, really important that users have choice. Users are always in control. You can decide what to do.

And now Sergey Brin has come in and been invited up to the Q&A. 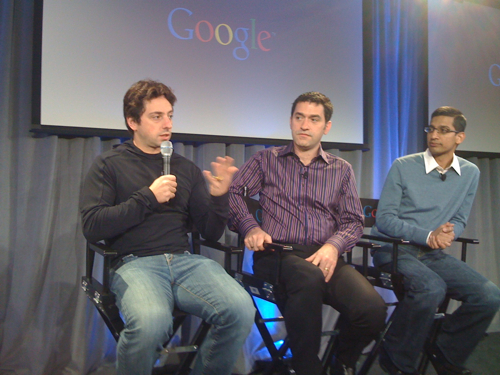 Plans to be like an second OS that could be booted? Not a focus.

Question again on devices. How’s it going to handle things like printers? Sundar: plan to support all standard keywords, mice, anything that identifies itself as a standard storage. Looking at printers. Yes, Chrome OS will print.

Question to Sergey on competition and how things have changed with Google making its own laptops. He responds:

Call us dumb businessmen, but we focus on user needs … rather than competitors .. so this is meant to fill a need.

Postscript by Barry Schwartz: Danny gets to have all the fun and live blog the event, while I get to watch all the videos posted to the various Google blogs. There is a dummy video on the Google Blog and more technical videos on the Chrome blog. Here they are all those videos: