The Wall Street Journal reports on new ad formats being developed by Google (and others) that would “outperform” or are intended to succeed traditional online ad formats. New “interactive video” units were briefly and vaguely discussed at the Allen & Co media confab in Sun Valley Idaho:

Google Chief Executive Eric Schmidt championed “interactive video ads,” which he said are on the way. Such ads, which could appear anywhere on a Web page, not just inside a video, would be like mini-Web pages. That means they could allow Web users to watch a video, leave a comment and see real-time updates within the ads that are more customized to their interests.

Earlier this year at the Google I/O developer event, the company previewed a number of rich, interactive ad units for mobile. And Google has been evolving AdSense and AdWords units to include more imagery and rich-media capabilities. So these new units would be consistent with that larger project and part of Google’s brand/display ads push.

There are already a number of companies that offer “interactive video ads” including MediaMind (formerly Eyeblaster) and Mixpo, among others. However the passage above hints at broader functionality than is currently available to advertisers. 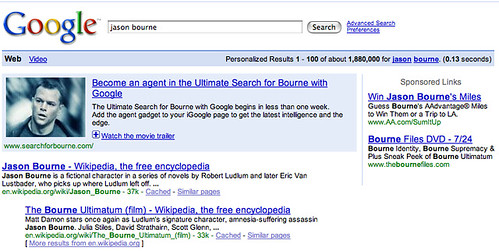 As mentioned, we’ve already seen video behind the plus-box (above) as well as images in AdWords. I would expect these forthcoming video units to also show up in search at some point, making them perhaps the ultimate combination of search + display.