Now that Google Chrome is live, I spent some time looking at the search features within it, especially to see — as I did recently with Internet Explorer 8 — whether Google was going to try to stack the deck in its own favor. Like Microsoft, Google’s playing it straight. As for search features, I’m […]

Now that Google Chrome is
live, I spent some time looking at the search features within it, especially
to see — as I did
recently with Internet Explorer 8 — whether Google was going to try to
stack the deck in its own favor. Like Microsoft, Google’s playing it
straight. As for search features, I’m mixed on whether I like the new "Omnibox"
feature that combines a browser’s address bar and search box into one single
area.

After doing the install, Chrome checks to see what the default search
engine is for the browser you’re currently using. Then it confirms if you
want to stick with the default or choose a different search engine:

Unfortunately, the button text didn’t come out well in the screenshot
above. What’s happened is that Chrome saw that Yahoo is the default I had
set in Firefox, reports that it has seen this setting and asks if I want to
keep it. The first button in this case says "Keep Yahoo! as the default
search engine" while the second says "Change search engine."

Want to change? That only happens if you push the button. In other words,
as with IE, nothing changes unless the users makes that happen.

Let’s say we DO want to make a change. That brings up a new options
window: 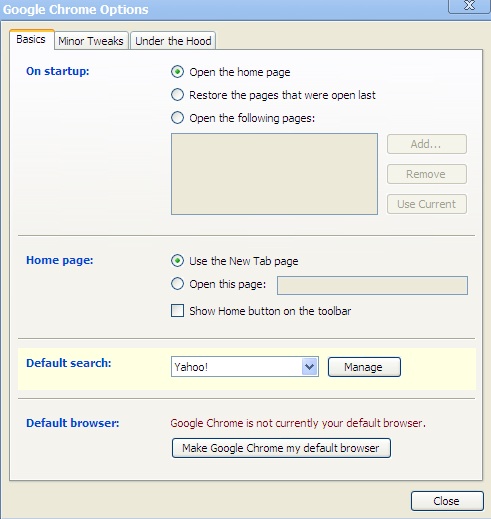 Where in the third section down, the default search choice is shown. Push the
Manage button in that area, and you get this: 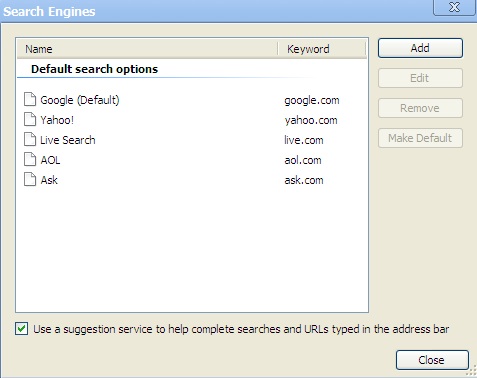 As you can see, there are five search engines listed:

Note that the screenshot above was made when I did my first installation of
Chrome, where I did NOT allow it to look at Firefox (because I still had Firefox
open at the time and couldn’t close it due to other work — and Google was my
default in Firefox at the time).

When I did an uninstall and reinstalled with Firefox closed, I got that list
above except Yahoo was listed first (I changed my Firefox default to see what
would happen), then Google, Live Search, AOL and Ask were listed, then I got:

I think these extra search engines were listed because they are ones that are
shown in Firefox other than Live Search, which
Firefox itself doesn’t
list.

Somewhat related, if you go to Yahoo using Chrome, you get this:

Each of the search engines has a long history of trying to pull people
away from particular browsers and/or toolbars (see
Microsoft Live &
Yahoo Push For Firefox Users, Plus Revisiting The IE7 Search Battle),
and Yahoo’s simply playing that game with its "Try Firefox 3" link — which
leads to a custom version of Firefox offered by Yahoo. It’s not a
Chrome-specific message. I get the same thing when I go to Yahoo in Internet
Explorer 8.

Back in the old days, browsers had an address bar but not a separate
search box. Then we got toolbars that added dedicated search boxes to the
browser, with the Google Toolbar probably being the most popular today.
Eventually, Firefox especially popularized the idea that a browser should
have a search box built into it. Many people use that, but clearly many
people still do not — otherwise the change to put a search box right into
Internet Explorer 7 last year should have made usage of Live Search rise to
some degree — which didn’t happen significantly.

I think those who’ve used to learn a built-in search box become heavy
adopters, at least from what I’ve seen of my own behavior and looking at
friends and family. So it’s kind of scary that Google’s playing with the
separate search box by eliminating it.

Google has said that many people already use a browser’s address bar to
perform searches. This is a well-known fact that still lacks a convincing
explanation or research into why it happens. Common reasons are:

So Google’s decided it should go, so the separate search box is combined
with the address bar in what it calls the "Omnibox." Enter a search term there, and you’ll
generate a search that hits your default search engine: 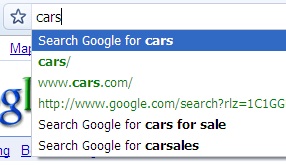 In the example above, I started typing [cars] and I get a prompt to
"Search Google for cars" as well as other options. Nice — and it’s also
nice that as you surf the web and visit other sites that have search boxes,
Google learns you can do searches there and adds them to the options. For
example:

After visiting eBay once, I was later able to type in [ebay transformers]
and get an option to "Search ebay.com for transformers" after a list of related
searches I might want to try on Google. Similarly with Amazon:

After visiting Amazon once, I was later able to type in [amazon pokemon]
and get an option to "Search Amazon.com for pokemon" after a list of related
searches I might want to try on Google.

Note how after the Amazon listing, it says "Keyword: amazon.com." That’s
actually the shortcut I should use to do a search and make Amazon come up at
the top of the list, to specifically search with it. For example, consider
this:

See how I get a little button-like image that says "Search Live Search"
that appears. This because I’d gone to Microsoft’s Live.com site (which is
Live Search), so the next time I entered "live.com" into the Omnibox, Google
Chrome knew I wanted to search specifically with Live Search. And if I’d
typed in Amazon.com followed by search words, that would have turned into an
Amazon-specific search.

It took me a bit to figure this out, and it’s kind of a pain having to
type in effectively the entire URL of a site in order to search there. If
I’m typing Amazon.com, then I might as well hit return and go there? Sure, I
can definitely save time if I just put in my search terms as well, but I
have a feeling that’s going to be too power-userish for many users. But it’s
a nice feature, and we’ll see how it goes.

Ultimately, I still kind of wish I had the dedicated search box. And for
those who depend on the Google Toolbar, don’t get your hopes up to see it
any time soon. Google told us they’re likely to develop some type of generic
API for Chrome first, then bring the toolbar out.

That should be reassuring to those who are paranoid that Google wants
Chrome just to spy on them. Google’s Matt Cutts has a
nice
post that explains how practically nothing is sent back to the Google
mothership from Chrome now. But I’m sure a toolbar will come — and that
you’ll get reporting back to Google eventually, all with the users consent,
of course. Google’s
personalized search service depends too much on gather that surfing data
for this to not be offered as an option.