Spring Is Here, Search Engine Logos For The Day

Today in the Northern Hemisphere, it is the first day of Spring. The search engines, excluding Yahoo, have special logos for the day. Let me share them with you. Google’s logo was designed by Eric Carle: AOL has a Flash animated logo:

Today in the Northern Hemisphere, it is the first day of Spring. The search engines, excluding Yahoo, have special logos for the day. Let me share them with you.

AOL has a Flash animated logo:

Live.com has a nice picture: 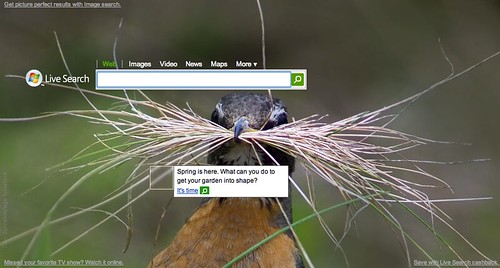 And I dressed up the Search Engine Roundtable:

To see other logos live today, go to the Search Engine Roundtable and you will see FriendFeed’s Nowruz logo, which is for the beginning of the Iranian year. You will also see DogPile’s March Madness logo.

Kalena Jordan found, Google New Zealand accidently linked the result to the “First Day of Fall”. She called Google the “dumbass of the week,” which Google’s Matt Cutts took offense to. In Australia and the Southern Hemisphere, March 1st (I believe) was the first day of Autumn. They don’t use the word “Fall,” they use “Autumn,” and it is apparently insulting to those in the Southern Hemisphere to use Fall instead of Autumn. In any event, people make mistakes and maybe the word “dumbass” in the Northern Hemisphere is a bit strong.

That being said – Yahoo didn’t show any logo, so they are kind of like Switzerland, being Neutral and all.