The Local Marketer’s Guide To Apple Maps for iOS7

While the launch of iOS7 has received a ton of press and blogger nitpicking about every last detail, little has been said about how the new version of Apple Maps affects local marketers. I feel like most marketers are still ignoring Apple Maps because it got a lot of Apple Maps Sucks-type press a year […] 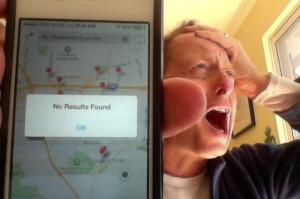 While the launch of iOS7 has received a ton of press and blogger nitpicking about every last detail, little has been said about how the new version of Apple Maps affects local marketers. I feel like most marketers are still ignoring Apple Maps because it got a lot of Apple Maps Sucks-type press a year ago. Well, I like to say that even if you think Apple Maps suck, you know what doesn’t suck?

The fact that iOS is well on its way to one billion installations. Oh yeah, and over 200 million devices are running iOS7 only two weeks after it became available.  And the default mapping application on all of those devices is… Apple Maps.

So what goodies does the iOS7 version have to make life easier for local marketers? Let’s dig in, shall we?

1. Is Apple Maps Starting To Care About Business Data?

The initial versions of Apple Maps made it pretty clear that providing tools to businesses to help them manage their data and visibility was not a priority. They had bigger freaky fish to fry. It’s still not the most business-friendly application, but it seems like Apple is taking baby steps to make life easier for all of us. As I reported on Apple Maps Marketing, Apple Maps now displays a “Location is Missing” option in the Report a Problem screen. Based on the inquiries I have received since its launch, businesses not being listed is a very common problem. While it’s still too early to determine how effective this tool is (the Report a Problem tool hasn’t seemed particularly effective in the past year), this feels like a baby step toward a “claim your listing” feature.

And given Apple’s purchase of Locationary, a service that manages location data feeds, I wonder if we won’t see a move toward giving businesses more control over their listings. If anyone from Apple is reading this, you really should get there ASAP. There is a lot of pent-up frustration from business owners about how your product is shafting them. DM me.

2. Expanded Categorization — Are You Categorized Correctly?

Apple has added a large amount of new business categories to Report a Problem. Here’s a complete list of Business Categories for Apple Maps. For any of you who have done taxonomy work before, you know what a thankless task it is. I guess it’s nice to see Apple screwing up its categories like everyone else. If you look through the list, you’ll see that there are a lot of duplicates, typos, and for some reason categories in different languages. I am curious to know how many Amstgericht, Badested, Ballonfahren and Broderi & hekling businesses are out there (just bought heklingSEOGuide.com, btw). All skämta aside, it’s helpful to know these categories because if your business is not showing up for local category searches, you might want to check to make sure that Apple has your business categorized correctly. Additionally, you should also go to the main business data suppliers for Apple Maps and make sure you categorize your business in the categories that best map to Apple’s.

3. The Popular Apps Nearby Trojan Horse?

Near the bottom of each business’ “Info” screen is a list of “Popular Apps Nearby.” This is perhaps the most interesting development as it hints as to a potential future where Apple Maps is more like (App)le Maps.

Currently, there doesn’t seem to be any logic to what apps show up, other than that the app has some geographical relationship to the business you are looking at. For example, I am in the Bay Area and see Apps for a local TV station and local transit. Not sure why Yahoo Sports or ESPN are there, though — perhaps because the business is a bar? Businesses should look at what apps appear on their profiles. In the near term, there might be some marketing advantage to being present on those apps, since Apple is promoting them to your customers.

But this could be merely a precursor for integrating a user’s apps into the maps. For example, if you are looking for a restaurant and your iPhone has an UrbanSpoon app installed, it could give you the option to show the UrbanSpoon data in the map (v. the Yelp data which it defaults to). If this happens, there will be a big opportunity for local services that can get users to add them as defaults in the maps.

The exposure they are getting is huge and as Apple Maps adoption increases, Yelp’s metrics are only going to get bigger. And you can now “Write a Review” instead of a “Tip” directly from Apple Maps. At some point in the next year, I wouldn’t be surprised to see Apple announce more partners like Yelp — but for now, they are the only game in town. Past experience is no indication of future stock tanking….

Anyhow, there will be many more twists and turns for businesses in Apple Maps — iBeacon could be a real game changer — so get ready to think different… locally.