When Google Gets It Wrong: Direct Answers With Debatable, Incorrect & Weird Content During the past year, Google has increasingly served up more “direct answers” – a search result that highlights content Google believes is the best answer for a particular question, placed at the top of the results page.

The addition of more direct answer content is fraught with problems as Google’s algorithms attempt to find answers to tricky queries. With no human review process in place for the results, the opportunity grows for debatable, incorrect and sometimes completely inappropriate content showing up as a top search result.

Listed below are a number of examples – some already removed, others still up for all to search – where the direct answer included content that, if given a chance to be reviewed by a Google search team member, would most likely be pulled.

Last week, a direct answer for “what happened to dinosaurs” was spotted by Motherboard.com, claiming “Dinosaurs are used more than almost anything else to indoctrinate children and adults in the idea of millions of years of earth history.”

Here’s a screen capture of the direct answer: The example highlights how, by providing direct answers, Google is offering up results as factual information when there’s an obvious debate over what’s right or wrong.

A similar instance happens if you query “does god love everyone,” with Google offering up a result that claims, “God only loves Christians.”

The content for these direct answers is the result of the search engine analyzing web content to identify the most relevant result. There is no person or team at Google reviewing queries to determine the most accurate response; instead, the direct answers are dictated by a Google algorithm that may or may not deliver correct information.

Last year, a Google search for “king of united states” returned a direct answer listing President Barack Obama as the “Emperor of the United States of America.”

With content pulled from the politically-conservative website Breitbart.com, Google was serving up an obviously false answer at the top of its search results. Worse, after Search Engine Land reported on the obviously incorrect result for the “king of the united states” query, Google now lists content from our report as a direct answer – keeping the wrong answer at the top of its search results. Another example of Google’s direct answers flat-out getting it wrong occurred last October when it listed Stephen Colbert’s height as 5-10.

“I’m 5-11 – that’s me, Brad Pitt, Russell Crowe – these are my peers. When we’re in the steam room naked no shoes, we’re looking at each other eye-to-eye…seriously, 5-10? Those are Matt Damon numbers,” raged Colbert. Having a bigger platform than most of us, Colbert was able to get Google’s attention quickly and the discrepancy was fixed. (Now if you do a Google search for “stephen colbert height” the direct answer lists him correctly at 5’11”.)

While some direct answers may be debatable or just plain wrong, others could be labeled as inappropriate content, like when a search for “how to eat sushi” returned this not-suitable-for-work result. 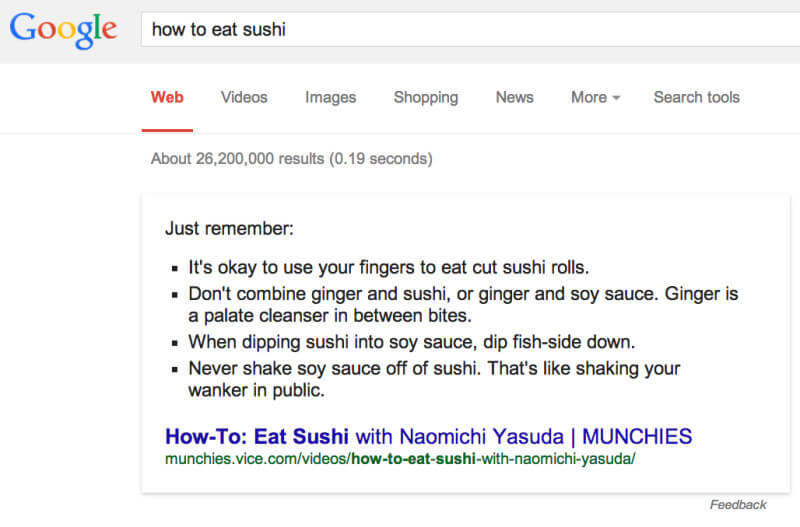 The “how to eat sushi” direct answer has since been removed, but the following even more inappropriate result currently shows up as a direct answer for the query “stop hiccups.” Not Necessarily Wrong, But Weird Nonetheless

Not only does Google’s process for retrieving its direct answers open the door for incorrect or inappropriate information being presented as the most relevant result, it also turns up answers that seem out-of-place or strange.

For example, when asked “what is 411” last year, Google’s direct answer appeared to play favorites with telecom provider AT&T: Moz marketing scientist Dr. Pete Meyers shared a number of examples spotlighting the vulnerability of Google listing results that are way off the mark, including the following search for “how tall is a stormtrooper.”

Or, this result pulled from a Reddit thread that showed up as direct answer for the query “how old is spongebob.”

What we’ve listed here is the tip of the iceberg when it comes to incorrect direct answers waiting to be discovered.

With so many opportunities for misleading, inappropriate or all-out wrong results, Google will undoubtedly confront more issues where questionable information finds its way to the top of its results page – offering up content unchecked by humans and being presented as the most accurate answer.