Is someone getting back at your company by leaving negative reviews? Contributor Joy Hawkins shares types of reviews Google tends to remove and how to make them disappear. On the Google My Business Forum, where I volunteer as a Top Contributor, we frequently see themes and threads from business owners who want Google to remove their negative reviews.

There are a lot of cases where we cannot do anything because the reviews don’t break Google’s review guidelines, but there are also many scenarios where it is likely Google will remove the negative reviews.

Here are a number of real review cases I have worked on recently. I wanted to share the outcomes so anyone experiencing a similar situation will have an idea what can be done to help their website.

My first review example involves an illegal and racist review left against a school.

The person leaving the review claimed the school offered him an illegal drug and was affiliated with racist organizations. (Note: The original review has been removed. This is the school’s response.)

The review contradicted itself and seemed outlandish, so the review was removed. Since it’s highly (highly!) unlikely the same person went to all those different rehab centers (there were many), the reviews were removed.

There are many instances where a single individual will leave a review of his/her “experience” after creating multiple profiles and asking friends to post negative reviews about a business they have an agenda against.

In this example, a business in Amsterdam received many one-star reviews from the same person who was also sending them threatening emails. In these cases, the reviews are usually left all at once and in a short period of time. When you find profiles bolded and leaving you a negative review while leaving your competitor a glowing review, this is usually a sign the person behind the review is the competitor.

In this case, the business below received four negative reviews in one day, and each profile was leaving negative reviews for several different massage shops but leaving a positive review for the same competitor.

Not all reviews are left with malicious intent. Sometimes people just make mistakes and leave a review for the wrong business.

In this example, an apartment rental agency noticed reviews referencing food. The agency doesn’t have a restaurant, so the reviews were accidentally left on the wrong business and eventually removed. My all-time favorite example of a review left for the wrong business happened to my friend Darren Shaw from Whitespark Local SEO: 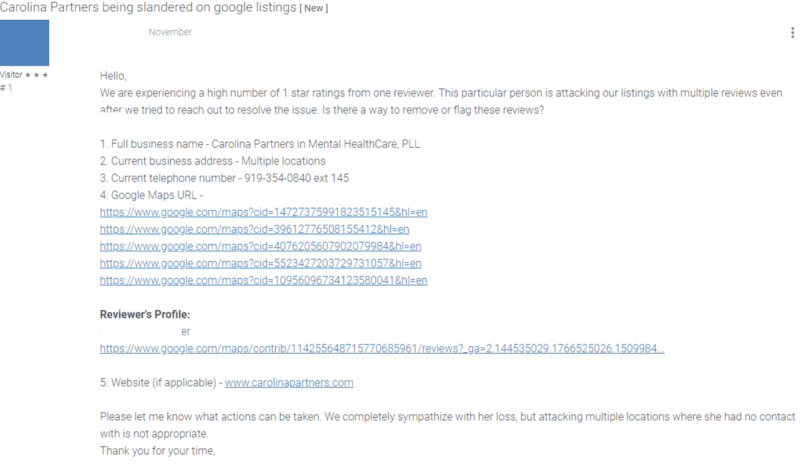 The reviewer in this example left one-star reviews for five locations of this mental health facility. Again, it is highly unlikely one person would be a patient at all locations and experience the exact same issues, so the reviews were removed.

Leaving negative reviews for a current or former employer is against Google’s guidelines. This policy was just recently changed from current employees to both current and former employees.

If you get a lot of negative reviews as a result of a controversial media incident, you have a case to get the reviews removed.

In the case below, a university was getting hit with a high number of negative reviews due to a free speech controversy reported in the news. The vast majority of people leaving the reviews had never had an experience with the college but left negative reviews anyway because they felt passionate about the cause. In the end, Google removed over 100 reviews. Has your business experienced similar review issues? If so, I suggest posting over on the Google My Business (GMB) forum or contacting GMB via Twitter or Facebook for help in removing your negative reviews.