Google's recent introduction of Place Pages within Maps came closely in sync with some key adjustments in the factors used to rank local search content. The combination of changes has resulted in Wikipedia abruptly emerging onto the scene as a highly influential factor. I'll describe what appears to've happened, and how it can impact local business rankings.

Google’s recent introduction of Place Pages within Maps came in sync with some key adjustments in the factors used to rank local search content. The combination of changes has resulted in Wikipedia abruptly emerging as a major influence on local search rankings. I’ll describe what appears to have ve happened, and how it may have impacted your local business rankings.

When Place Pages were introduced into Google Maps, Google was attempting to expand content to provide locations and information about all sorts of things beyond just businesses. The Maps team sought to provide information about points-of-interest such as parks, monuments, forests, major buildings, historical markers, natural features and more.

Google Maps simultaneously added what I’ve referred to as landmark icons embedded into the user interface display of maps which are icons pinpointing the newly introduced points of interest in addition to particularly popular businesses (the businesses have also been referred to as “Favorite Places“, and Google internally refers to the clickable landmark icons as “Smart Maps”).

The Google Maps ranking algorithm was adjusted to identify and rank landmark places and the businesses which are “Favorite Places.” To do this, Google introduced a concept called “PlaceRank”, which was perhaps first highlighted by Bill Slawski in 2007 in a post analyzing the patent which Google had been granted, “Entity Display Priority In A Distributed Geographic Information System.”

You don’t have to slog through the patent and conduct research to see if PlaceRank is at play. quoted by TechCrunch quoted John Hanke, Google’s vice president of Product Management for Google Earth & Google Maps, stating that businesses were selected as Favorite Places based upon PlaceRank:

“They are selected based on their PlaceRank,” says John Hanke, VP of Google Earth, Maps, and Local. PlaceRank is like PageRank for places it tries to figure out how prominent a place is based on factors such as “references on the Web, reviews, photos,” says Hanke, “how many people know about it, how long its been around.”

If you really want to understand PlaceRank, you should now ask yourself just what are the specific sources that Google is using to obtain references? For businesses, it’s obvious that some of those sources are internet yellow pages and other authoritative business directories and review sources. And, one can easily find Panoramio photos, Flickr photos and YouTube videos throughout Maps. But, what were the content sources that Google used to identify Places which are not necessarily businesses, like parks and monuments?

It’s not surprising that Google would look towards Wikipedia for info about landmark places. The content is rich, deep and available for free under Creative Commons licensing. Marketers have long observed Google’s love of and near-preferential treatment of Wikipedia pages in regular web search results, so one could have predicted seeing excerpts and references to Wikipedia showing up on Place Pages in Google Maps, such as for the famous Hollywood Forever Cemetery in Los Angeles: 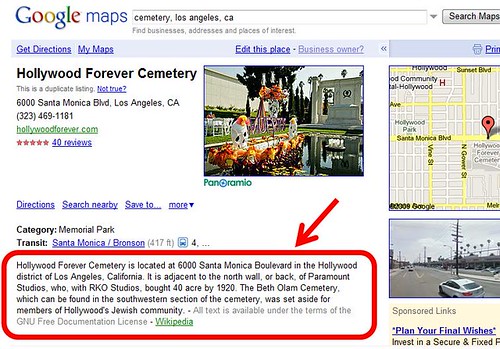 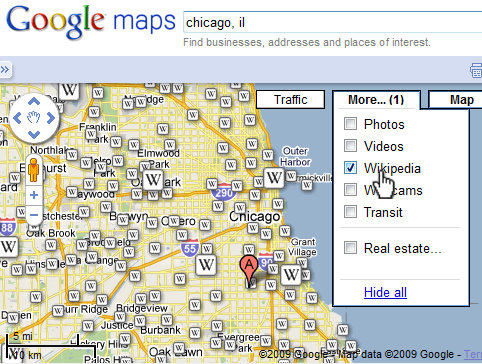 It appears to me that Google may have rushed development of mashing-up PlaceRank with existing business listings, because I’ve found a number of examples where Google Maps appears to have confused Wikipedia article pages with businesses that only have a coincidental association with the article.

It appears to me that if your business is notable enough to merit a Wikipedia article, this provides a sort of endorsement indicating that you’re popular enough to be considered a local landmark, and Google is weighting that citation very heavily in the local ranking algo. As with the example image above for the “Hollywood Forever Cemetery” in Los Angeles, businesses which have a Wikipedia article dedicated to them are nearly guaranteed to be in the top of the search results within Maps and within the 7-pack under universal search (Amusingly, and perhaps tellingly, the Hollywood Forever Cemetery seems to be mislabeled in the 7-pack for some reason at the moment, instead mis-titled as “Hollywood Flandmark Cemetery“).

Yet there are now an astonishing number of cases where Wikipedia pages are apparently misassociated with businesses, resulting in abrupt shifts in Google Maps rankings, and very unmerited high rankings. I see cases where Google Maps is using very loose/fuzzy logic to match names of businesses with titles of Wikipedia articles.

For instance, try searching for “Attorneys, New York, NY”, and one of the top listings is for the “Bowling Green Associates LP” firm. If you click to their Google Maps Place Page, you’ll find relatively few references cited for the law firm, but quite a few references and the Wikipedia content for the “Bowling Green Park” which is apparently adjacent to their building: 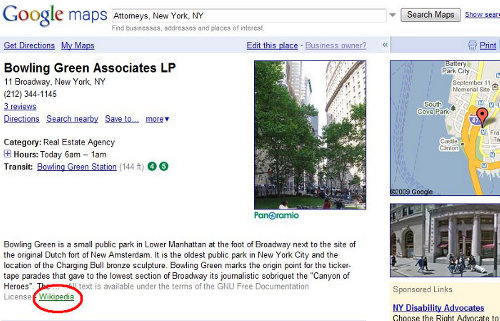 When you see this, you have to ask yourself, does this business justify getting top placement for “attorneys” in this highly competitive market, or did they merely luck into it because they happened to have a landmark park included as part of their business name? One might assume there were other ranking factors at play, but there are too many similar cases to think this is an isolated occurrence.

For another example, search for “doctors, miami, fl” in Maps, and one of the top listings is for “CAC Florida Medical Centers – Little Havana”: 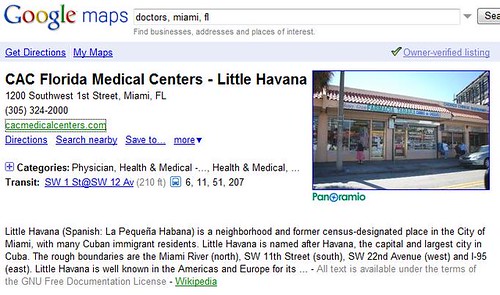 Is this ranking justified for “doctors” in Miami? Well… maybe. I’m guessing the “Clinica Asociacion Cubana” for Little Havana might be pretty well-known in the Cuban population in Miami, but the profile for this clinic or hospital should not be filled with information about the Little Havana neighborhood that has been introduced with the Wikipedia article content.

A much more dramatic example is the Place Page for “Phillips Russell PhD”, a psychologist who ranks high in Cambridge, MA, apparently just because his name bears a passing resemblance to a landmark and its street address, the Philemon Russell House on Russell Street in nearby Somerville: 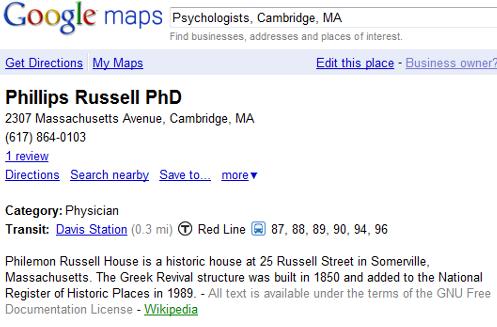 Another sample is “Elizabeth Bowen” which was ranking well for “Attorneys” in Miami, apparently because of being confused with the novelist, Elizabeth Bowen: 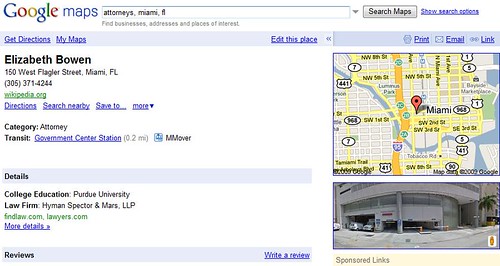 Note that for a brief while, the Elizabeth Bowen Wikipedia article URL was the official website URL for this attorney, although it appears to have been subsequently corrected.

The majority of cases involve articles about places which get associated with business listings with the place name as part of the business name. Another example of this is the Solomons Island Florist, which is currently ranking very high for “Florist” searches in the state of Maryland—apparently because of having “Solomons” as part of the business name, which got it associated with the Solomons Wikipedia article and it was also close in proximity to the geocode location in the same article: 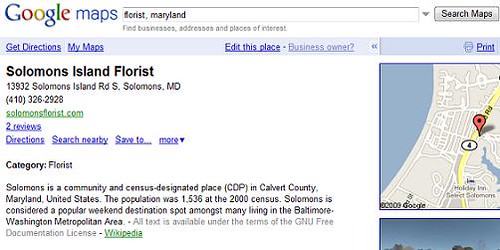 Solomons is a pretty remote place, compared to bigger cities like Baltimore which probably have more popular florists to choose from—and are much more user-friendly business locations for consumers from a geographic accessibility viewpoint.

The business appears to have become entangled with the Wikipedia article page about a highway tunnel, the “Lowry Hill Tunnel” due to closeness of name and proximity.

I did do some checking for more obvious potential name mis-associations, such as businesses named after “Benjamin Franklin,” “Abe Lincoln,” “George Washington,” and “Martin Luther King, Jr.,” but I found no examples of those—indicating that Google Maps engineers were perhaps aware of some of the more well-known names which have been commonly used for businesses and which ought not to convey popularity ranking weight and association with Wikipedia articles. But, there are so many other bad associations with Wikipedia and Panoramio content that really should have been caught prior to launch of the new features.

All this goes to illustrate how the advent of PlaceRank as a stronger influence within Google Maps has dramatically shuffled business rankings. Some businesses which are perhaps the most-popular and most-cost-effective for an area, have now been pushed out of the first set of results for local searches, while some businesses which may not merit the higher placement have suddenly rocketed into top slots.

I do think the concept of PlaceRank is moderately good, so long as it’s tempered a little by additional other ranking factors. Google Maps is justified in conveying some amount of ranking weight, based upon the popularity of a business’s location, since convenient and popular locations are more preferred by consumers. I just think that the implementation here was somewhat faulty, and Google has been overweighed the importance given to Wikipedia articles as a source for PlaceRank data.

Sadly, examples like those I’ve shown above will likely result in larger amounts of Wikipedia spam and will result in a number of businesses attempting to break the Google Local Business Center rules by adding more place names into their listing names. While I expect Google Maps will perform more cleanup on misassociations like those I’ve pointed out, and they’ll likely do some tuning on the relative weighting of the various local ranking factors, I am sure that Wikipedia will continue to be an influencing factor within Maps from here forward.

There are valid ways to optimize business listings through Wikipedia which do not involve spamming nor breaking Wikipedia’s guidelines, but they require a greater degree of expertise and experience than most SMBs have.

If you’re interested in this, I suggest reading up on overall PlaceRank, and I recommend Ash Nallawalla’s excellent piece How to SEO for Google PlaceRank.

I also intend to outline some of the ethical/valid means of optimization through Wikipedia for local in upcoming articles here and blog posts at SEMClubhouse.com. Meanwhile stay tuned as Google Maps will likely expand its data sources for more information about places.